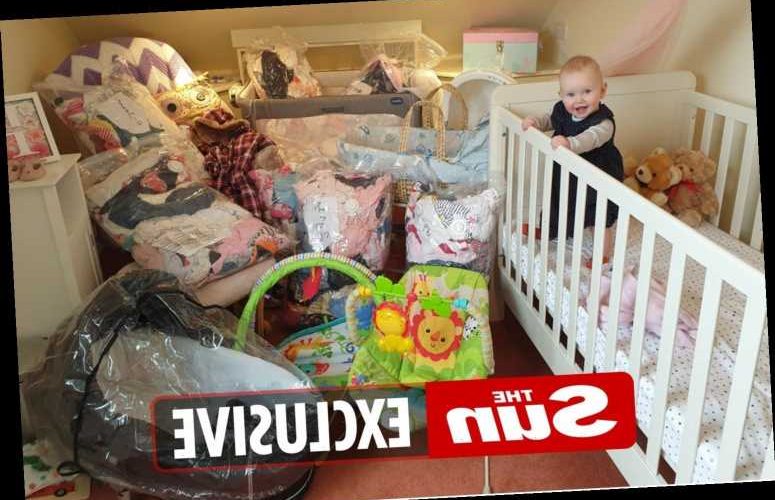 A THRIFTY first-time mum has revealed how she kitted out her baby’s toybox, nursery and clothed her for 12 months with designer gear for just £1,500.

Karen Rudd, 35, from Rochdale, saved a huge £4,800 on nine-month-old Florence’s essentials, which she got from big name brands like iCandy and Mamas & Papas. 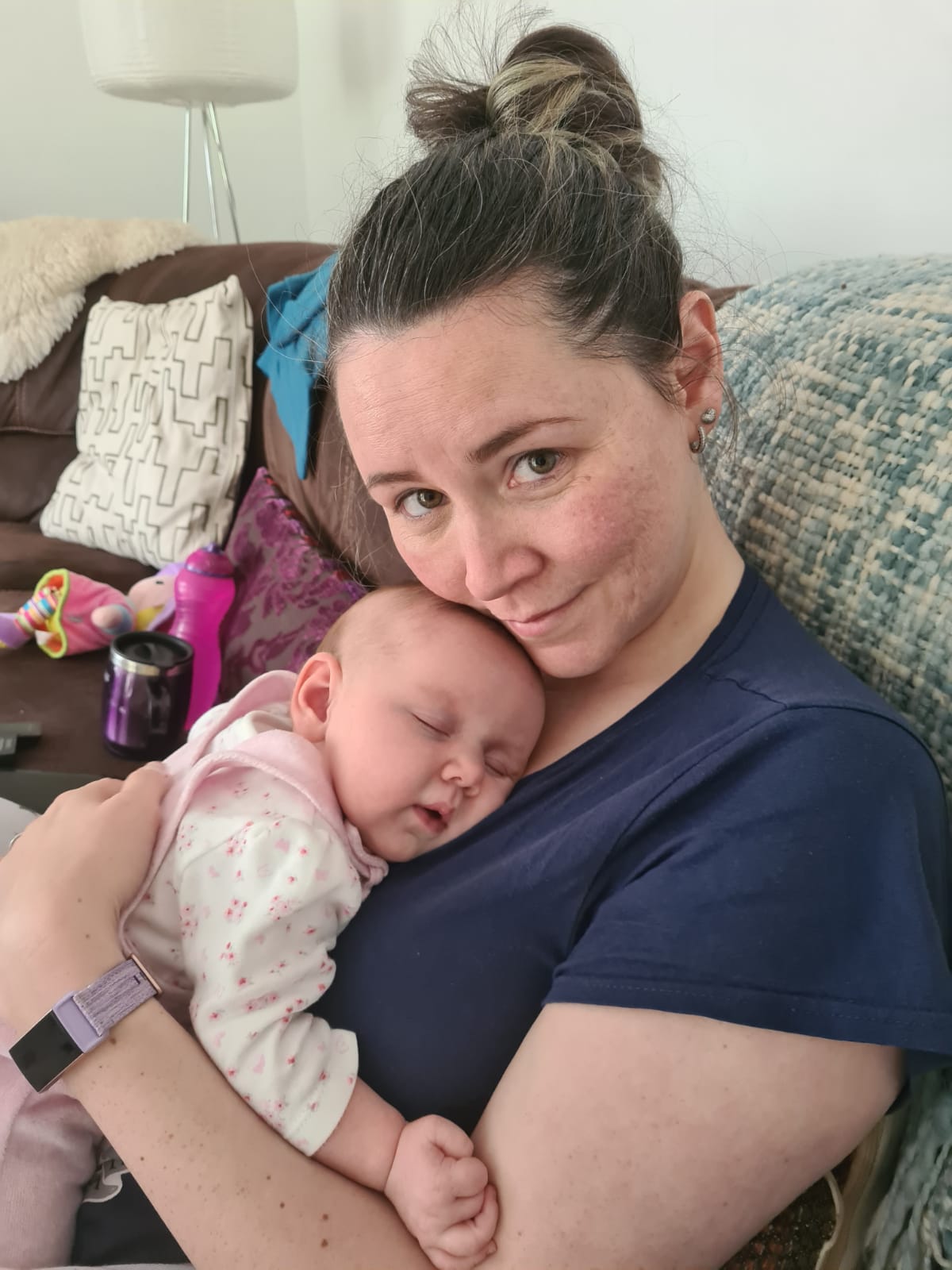 The savvy mum shares her tips exclusively with Fabulous…

After I was furloughed in lockdown 1.0 at 30 weeks pregnant, I made it my mission to spend as little as possible on my baby.

It can cost an eye-watering £11,498 on average to kit out a new baby according to LV, so I knew the potential savings were massive.

I sourced over £5,400 worth of designer stuff, including brands like iCandy, Mamas & Papas, Blade & Rose, Next, Fisher Price and Baby Einstein for just £584 and spent just over £900 on new things. 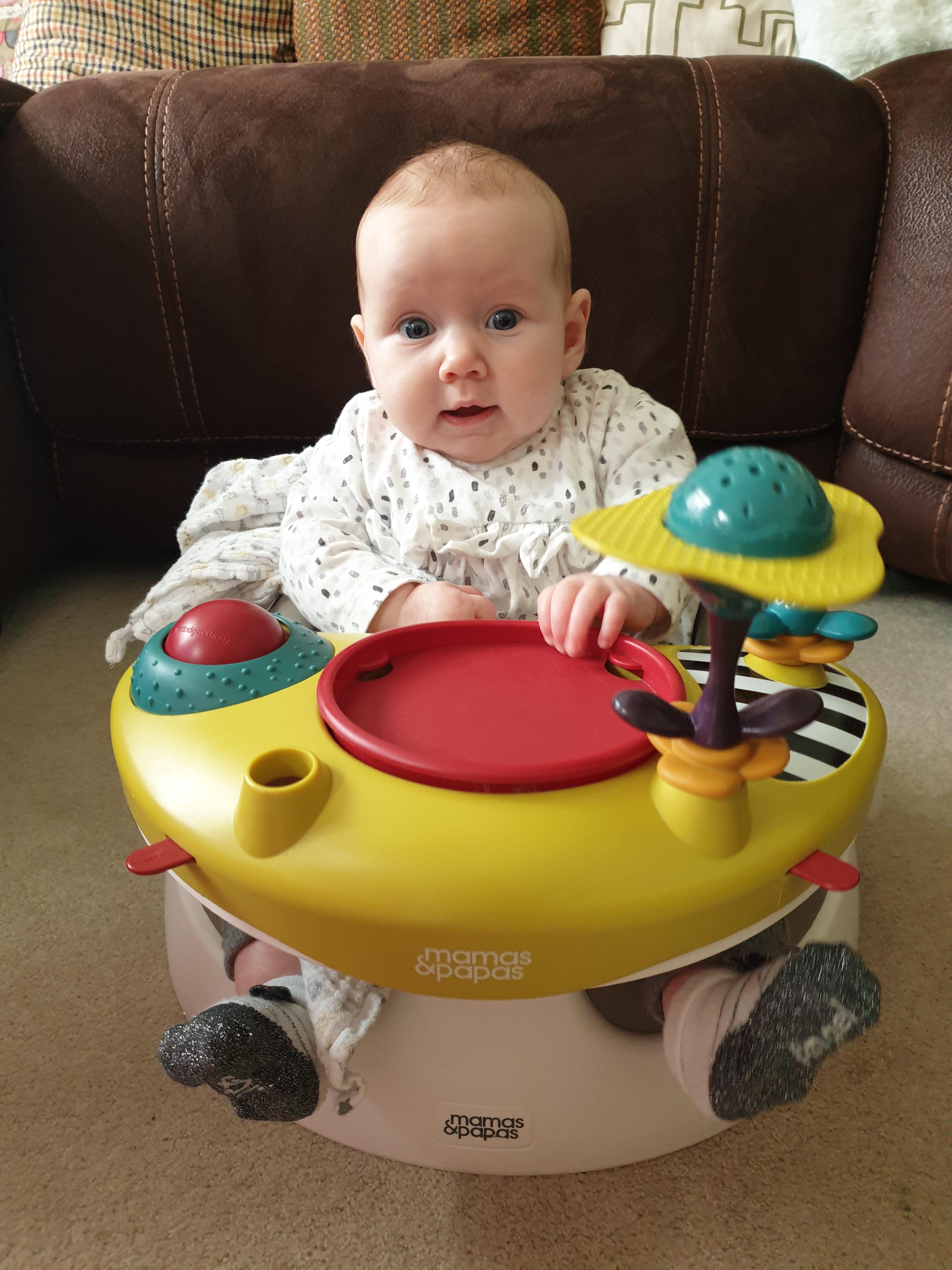 HOW I DID IT

I was given some freebies from friends and family, I bought new things in sales and used TopCashBack to get money back.

Controversially, I got the Moses basket, crib and cot-bed all second-hand. 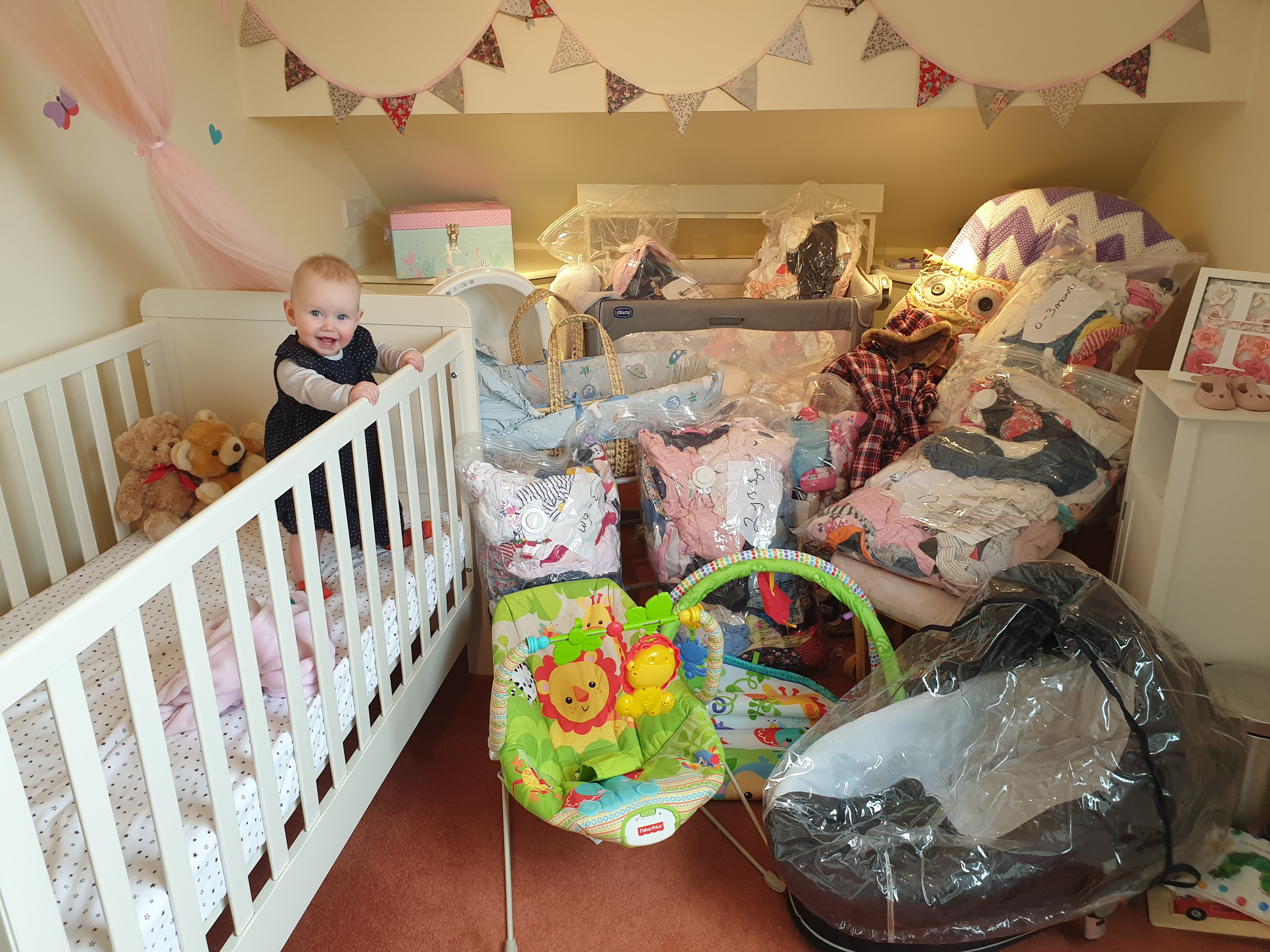 We got a top-range Mamas & Papas cot-bed and Chicco next-to-me crib from Facebook Marketplace, and a Clair De Lune Moses basket from a friend.

Although it’s unproven, I chose not to take the risk and bought new mattresses for £138 and got a few quid in cashback. 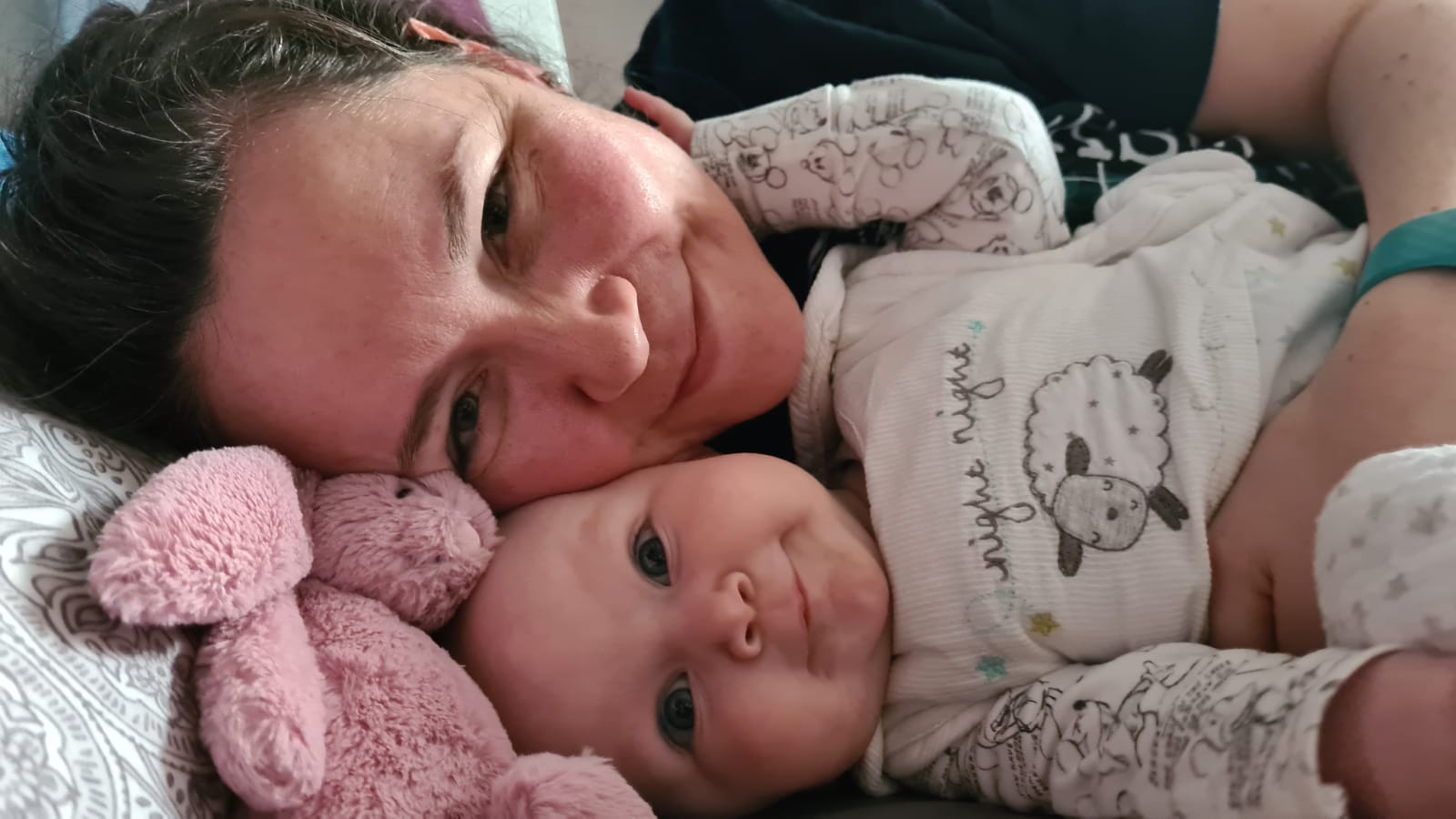 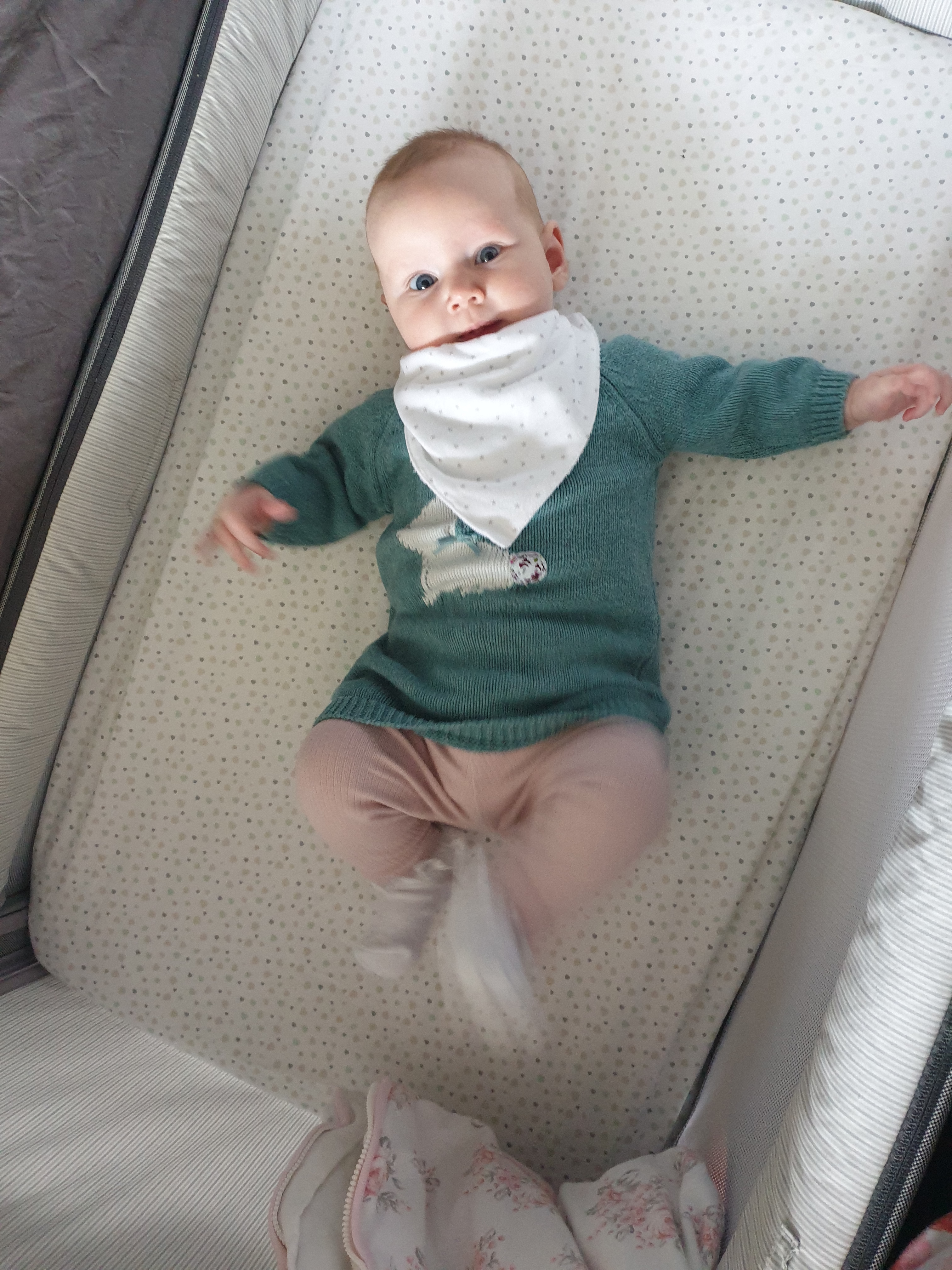 We got a Maxi-Cosi car seat and ISO-fix base for free from a close friend, saving us £266.

Second-hand car seats can be risky because you can’t guarantee it’s not been in an accident.

Which? advise only buying second-hand car seats from trusted family members or a close friend who will be honest about its history.

I delegated pram research to my husband and boy did he grab a bargain. 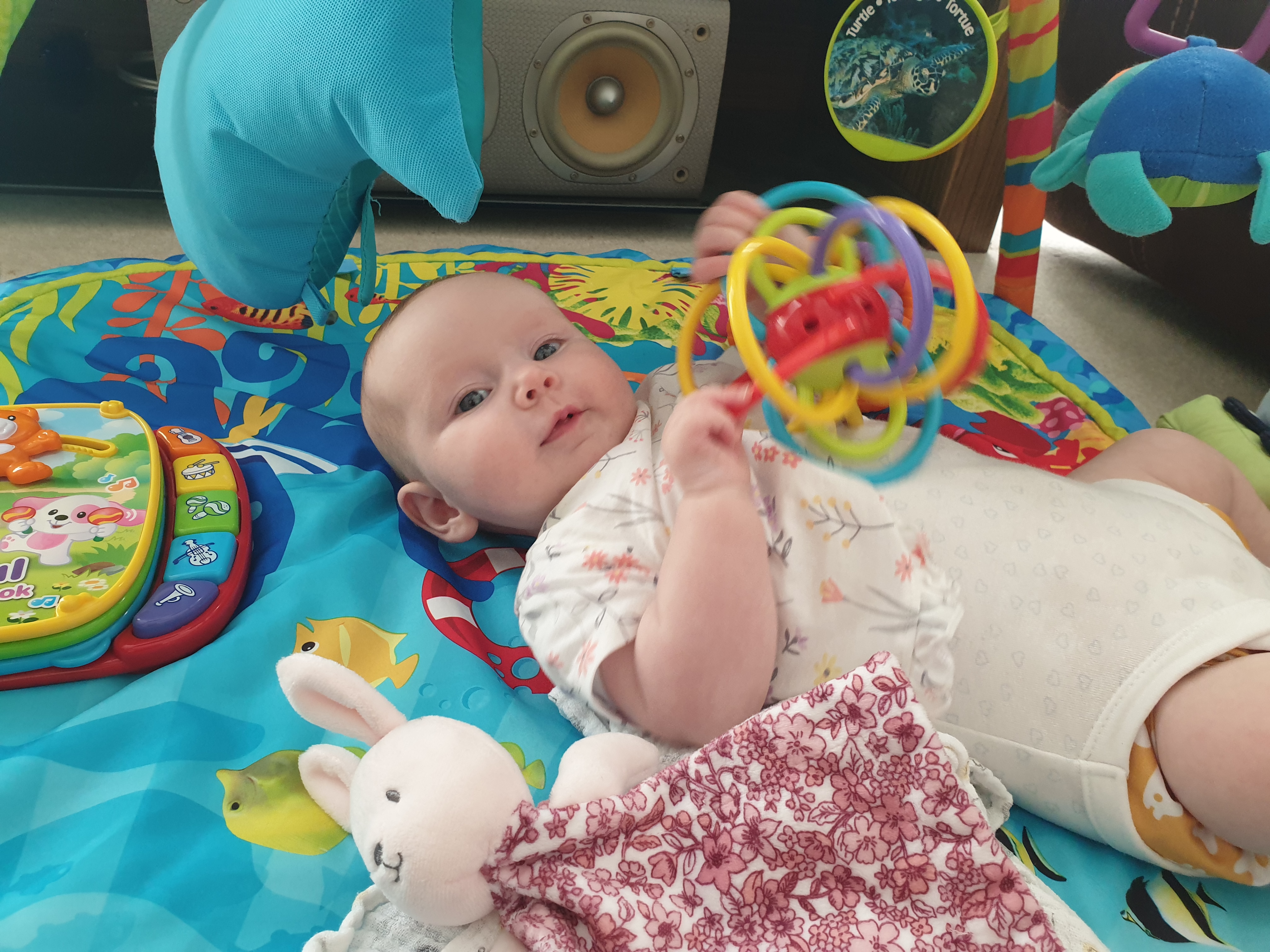 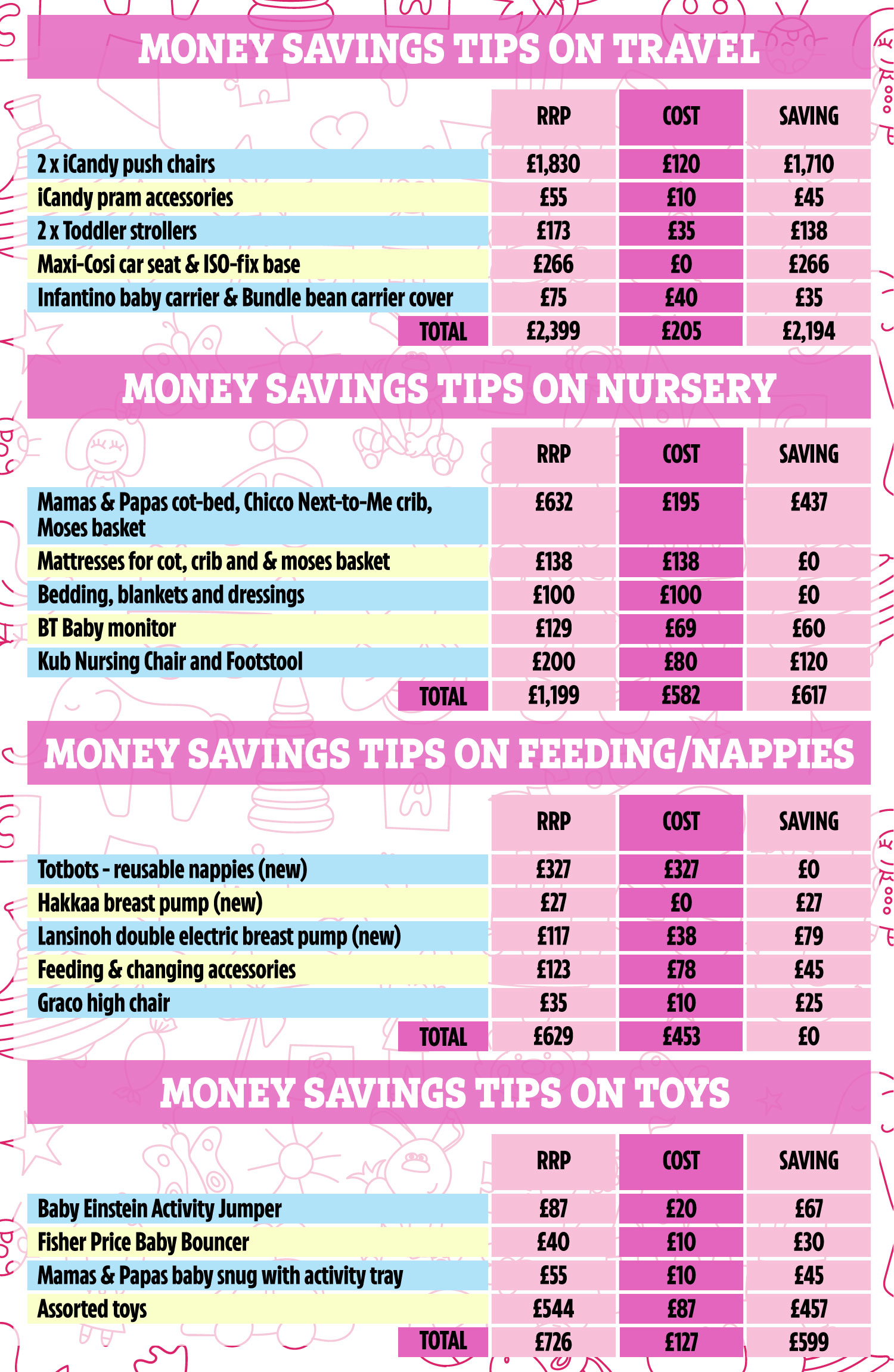 He found not just one, but two iCandy pushchairs on Facebook Marketplace.

A travel system with bassinet, stroller, rain covers and adapters for £80, and an all-terrain three-wheeler, which retails at a staggering £1,080 for just
£40.

Embarrassingly, we now have four prams after finding another two strollers for when she’s bigger, also on Facebook Marketplace, for a bargain £35 which would cost £173 new. 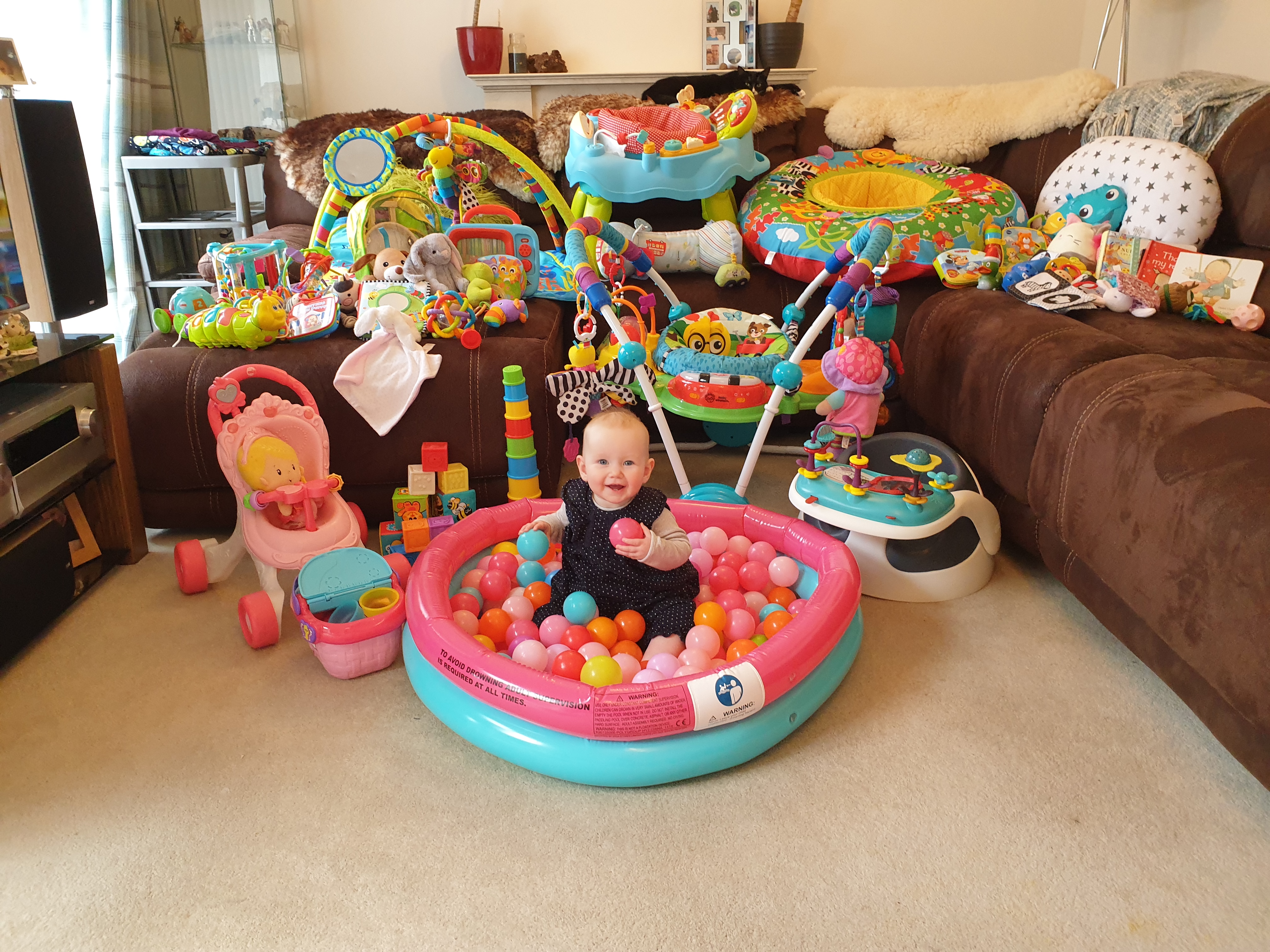 Top tips to save money

See what your friends and family can donate to you first
● Facebook Marketplace is great for bargains, and if you’re quick to respond you can
occasionally grab freebies
● BE CHEEKY always ask “do you have anything else?” and you may just get it for free
● Look out for ‘Baby events’ at supermarkets
● Go through a cashback site to earn money for things you’d buy anyway
● Sign up for freebies – Emma’s Diary and Bounty give away lots of free samples
● Check out MoneySavingExpert’s Baby MoneySaving guide

My sister gave me some girls’ clothes for free and we got another massive bag for free off Facebook Marketplace.

The clothes were mostly from Next, Marks & Spencer, Blade & Rose and Mamas & Papas which I estimate to be worth about £1,200.

I even made money by selling some of it too. I pressed and de-bobbled some Scratch Sleeves I didn’t need and sold them on Facebook, leaving me £20 richer. 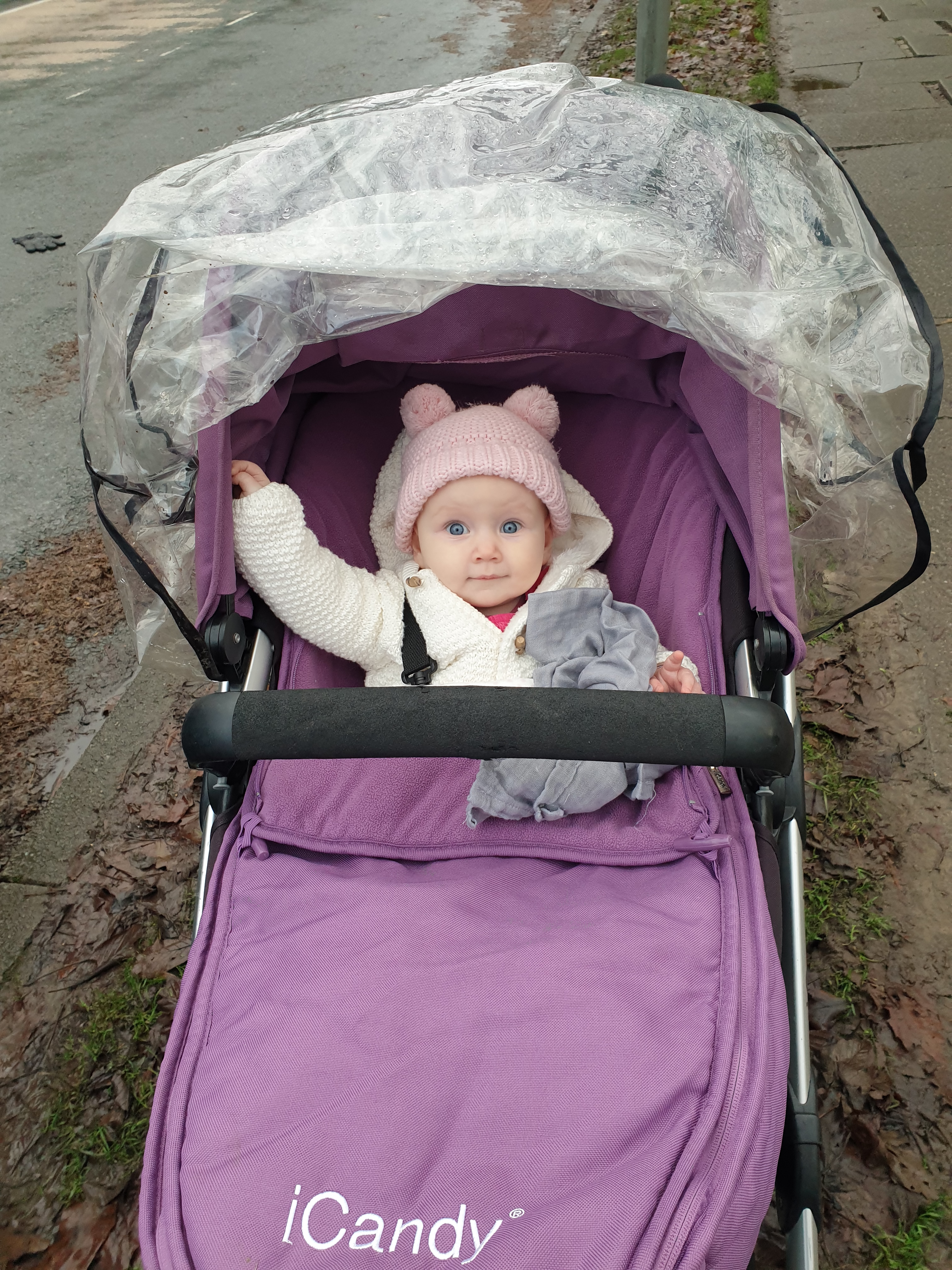 MOST EXPENSIVE THING BOUGHT – IT’S NOT WHAT YOU’D EXPECT

Empty shelves during lockdown 1.0 worried me so much that I looked into reusable nappies.

This was the most expensive thing I bought by far because I bought new.

My stash, including nappy bucket and reusable swim nappy, cost £327 from Totsbots.

It’s a big investment up front, but I estimate it will save me about £200 in the long run, and I’ll be able to sell them on when I’ve finished with them.

I was lucky enough to be able to breastfeed to save money on formula.

It’s free, on-tap and makes life easier when you’re out and about.

This moved onto baby-led weaning so now she eats what we eat and I don’t have to buy expensive shop-bought purees or waste time cooking and pureeing. 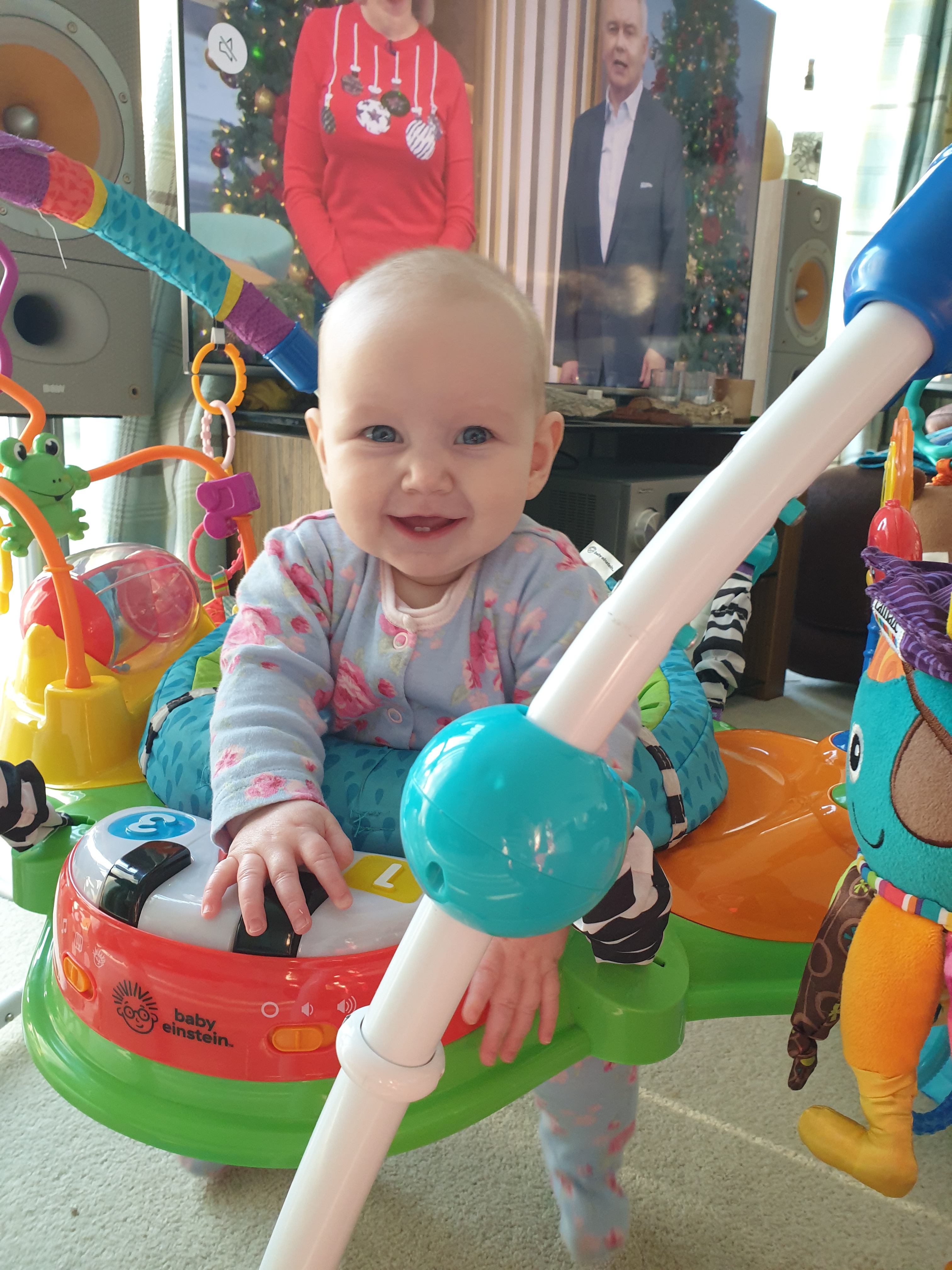 Jenny Keefe, from MoneySavingExpert.com said: “While children are priceless, the amount we spend on them seems to be limitless.

"But there are freebies you can get and schemes you can take
advantage of to save with your little one’s arrival.

"Whether you’re after cots, clothes, toys or baths, generous folk often give quality free or cheap hand-me-downs away on local Facebook or Freecycle groups – but remember to stick to current social distancing rules when collecting.” 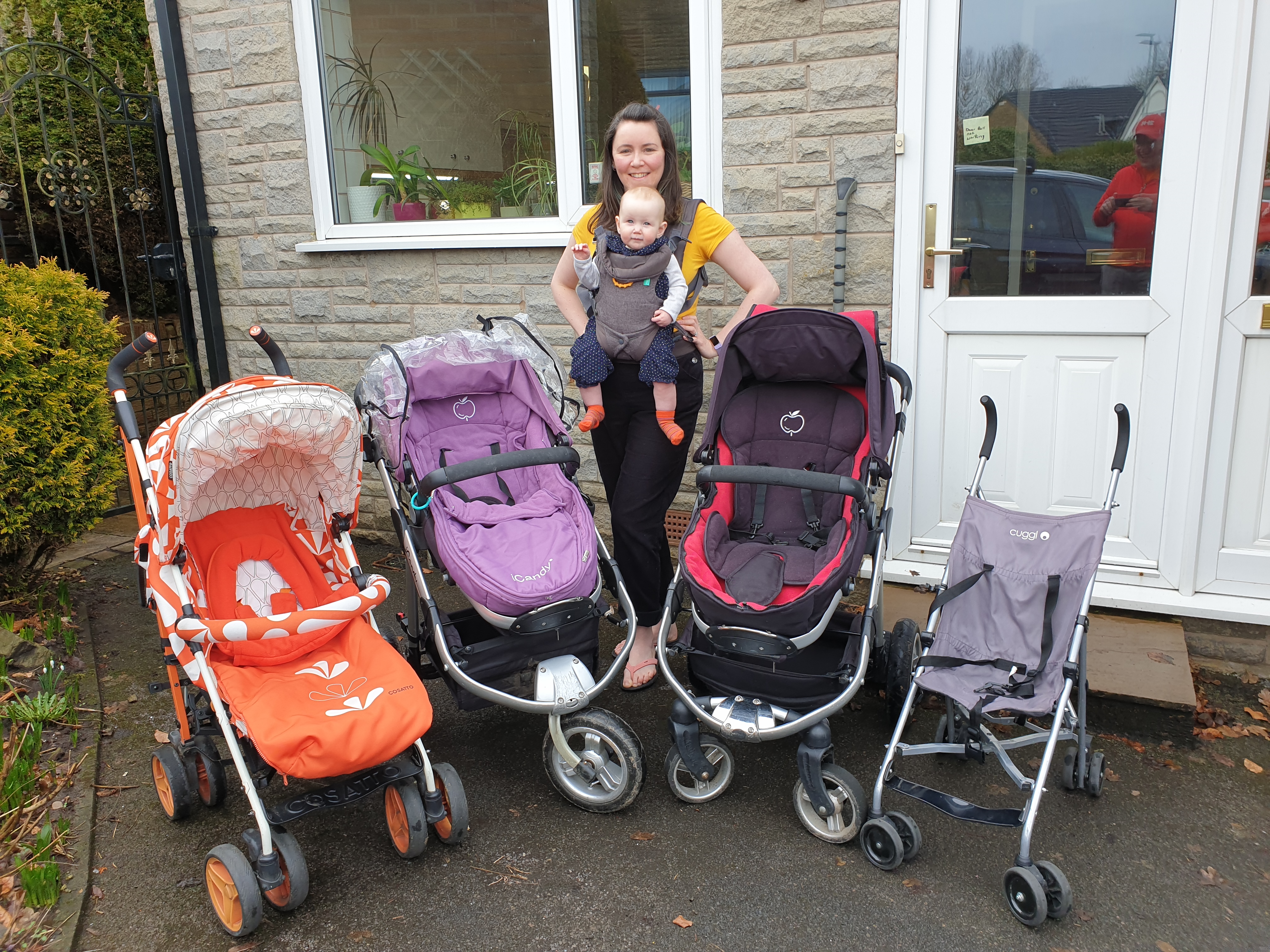 Meanwhile Stacey Solomon pre-peels potatoes for the week on Sunday and shares handy hack to stop them going brown.

And this ‘lazy’ mum blasted for pasta and peaches lunch she made her kids while homeschooling.

While this mum-of-10 shows of her whopping $1,199 monthly food haul – and there’s so much stuff it fills her entire kitchen.