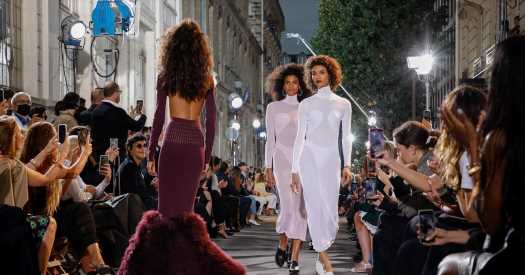 PARIS — On Sunday night in a Paris fizzing with post-lockdown euphoria, in a single-block street in the Marais where the designer Azzedine Alaïa once lived and worked, the first live couture week in a year a half began.

The pavement was lit by klieg lights, lined by two rows of black folding chairs, and clogged with fashion folk: movie stars (Owen Wilson, Monica Bellucci), designers (Raf Simons of Prada; Pierpaolo Piccioli of Valentino), and those who had once been regulars in the Alaïa kitchen (Farida Khelfa, the model and filmmaker; Anna Coliva, the art historian and curator).

All come to see Pieter Mulier, the Belgian designer who spent many years by the side of Mr. Simons, but had never run a house of his own, do what many had believed could not be done after the unexpected death of Mr. Alaïa in 2017: take on the legacy of the last great couturier of the 20th century, a famously independent creator, and make it his own.

No, not entirely. But he did do the right thing. 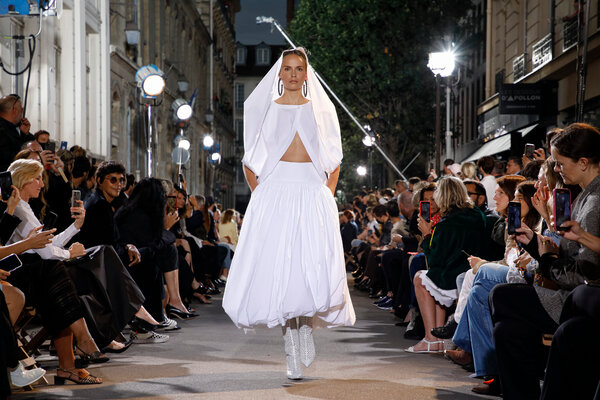 He proved he could speak Alaïa, with a sort of whistle-stop tour through the ABC’s of the brand: the sleek cowl-like hoods, the body-con knits, the crisp white shirting and marabou and python, the bike shorts and corset belts, the constructivist denim and iridescent flou. The highly controlled, sculpted volumes: sometimes billowing outward, sometimes second-skin.

He gave it all a slight twist, swapping Mr. Alaïa’s signature metal grommets for silver bobbles on laser-cut knits; cutting the shirts so they curved backward at the lower ribs and then up, to form a hood like a sail in the wind; layering sheer T-shirt dresses atop built-in bodysuits in a trompe l’oeil tease.

He wrote a thank-you letter to Mr. Alaïa, instead of show notes. He subsumed his own ego to the history of the house. He literally held the show outside the front door, as if to acknowledge he was just entering. Well, maybe for Covid protocols too.

If it also seemed a little bit like parroting — that’s how you start with a new language. Especially one treated as sacred tribal idiom by so many.

At a dinner held in the courtyard of the atelier after the show, Mr. Mulier said he had purposefully avoided the Alaïa archive, a famously rich history of the brand, because he didn’t want to be too intimidated. (He also said that when he was auditioning for the job — Alaïa is owned by the Swiss luxury group Compagnie Financière Richemont — he told the executives, “I’m not going to do sweatshirts, nylon or puffers.” Praise be.)

Instead, he paged through books of Mr. Alaïa’s work and relied on his own memory — he said he had been obsessed with Alaïa from “about 1983 to 1996” — and on friends who had been wearing the brand for more than 20 years. You could tell: The focus was on the silhouettes, especially of the early Alaïa years, more than any of the increasingly intricate details of the designer’s later work or the knife-edge exactitude; the sensuality overt, rather than internal.

Part of the alchemy of Alaïa was the fact the designer always put the woman first — was obsessed with how clothes felt on the body, so that they served the person inside. They made her into a stronger, more graceful version of herself, which often translated into an aura of power untethered from time. That’s hard to see from the outside and even harder to replicate. To achieve it, Mr. Alaïa was uncompromising. But to a certain extent, Mr. Mulier’s job, at least for now, is to compromise: to navigate between past and present, between a myth and a business.

As a result, though emotion was very high on the street — Mr. Simons, who said he knew how much pressure Mr. Mulier was feeling, kept tearing up with pride; Mr. Mulier signed his letter to Mr. Alaïa “with all my heart” — it hadn’t yet fully permeated the clothes.

That’s OK. It will probably come, as Mr. Mulier relaxes into his role, and is able to create his own vernacular, abstracting the essence of Alaïa into new forms. Perhaps the best way to think of this collection is as a sort of throat-clearing; a pretty glamorous hrrrggggrrruuumm. We will see what happens next.