But not everyone has hit the style mark this evening, with some stars opting for some very weird and wonderful designs. 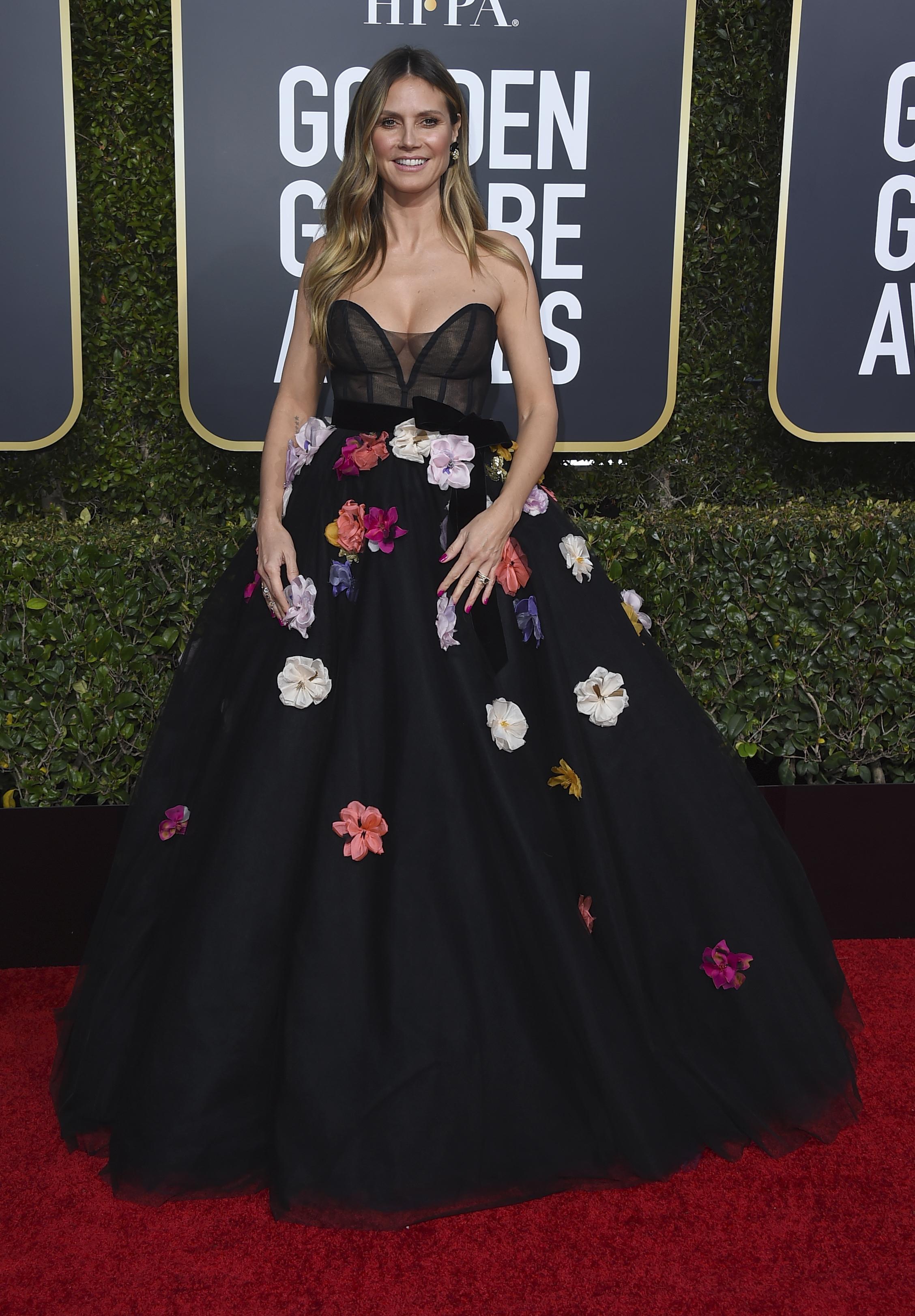 The peculiar style by Monique Lhuillier featured a plunge bodice and belted bow. 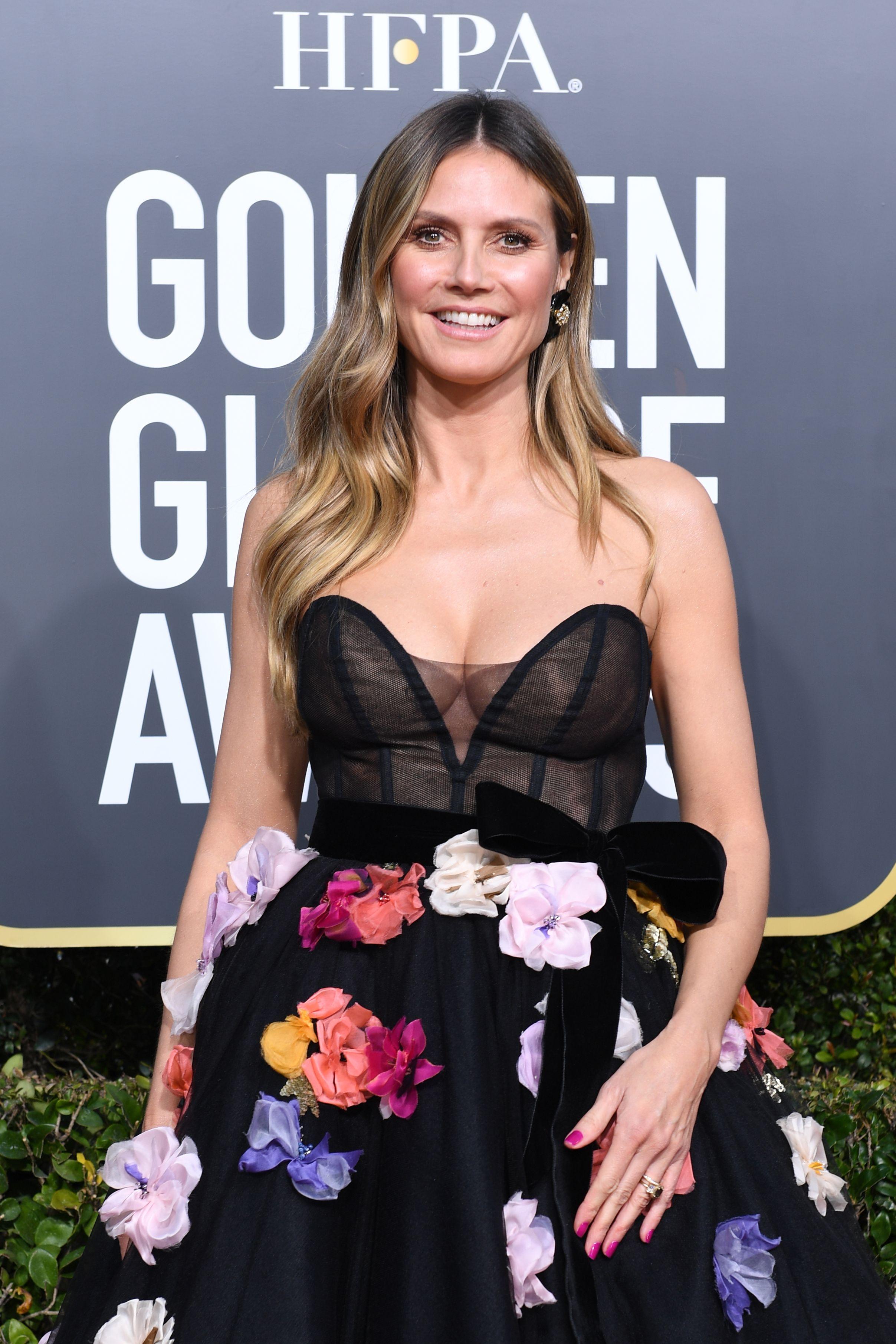 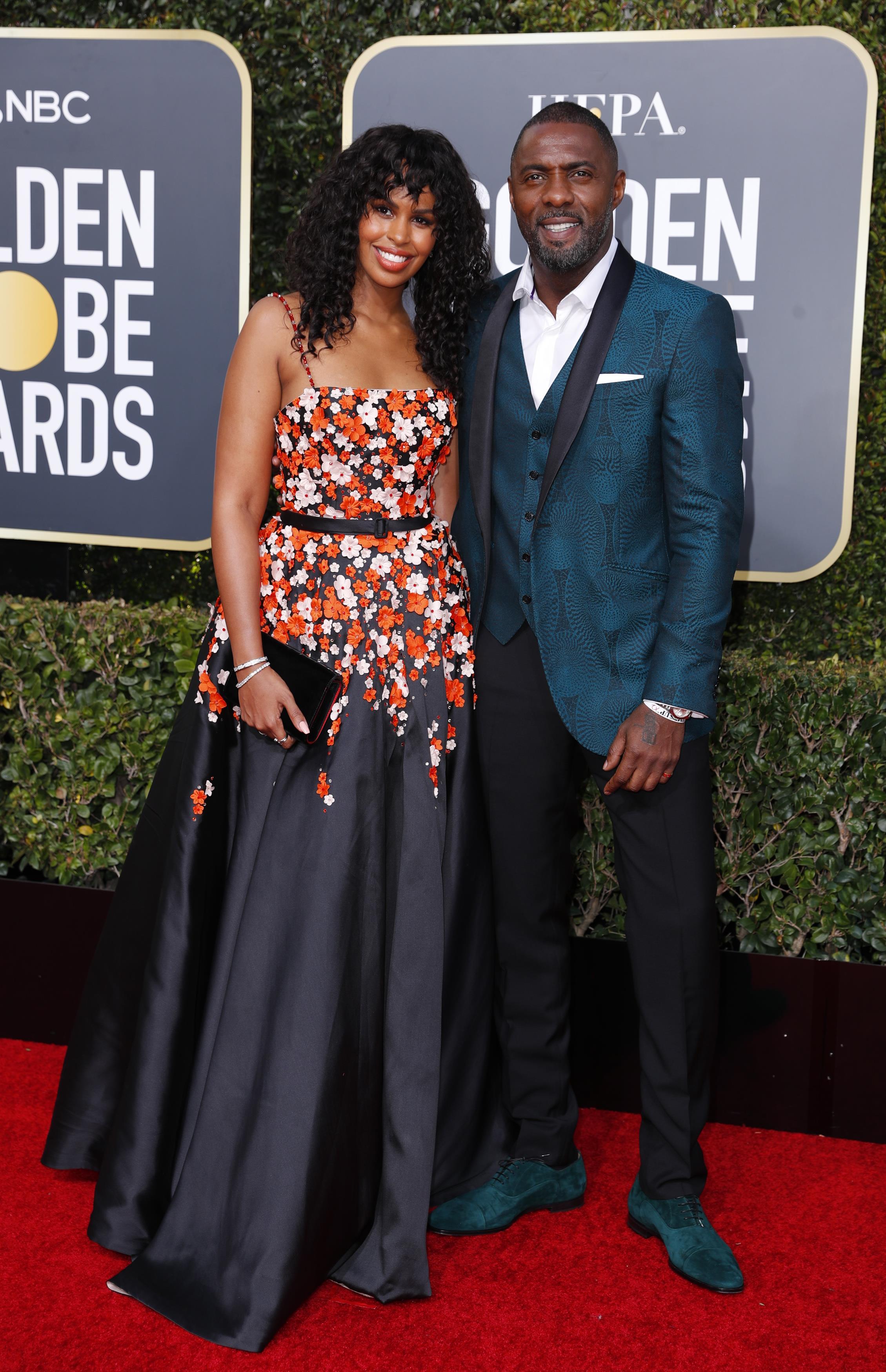 The 36-year-old musician – who is also married to host Andy Samberg – wore a nude and white mid-length gown by Rodarte, complete with laced hem and an oversized sequin love heart.

But unfortunately, one fan on Twitter called for her stylist to "be fired". 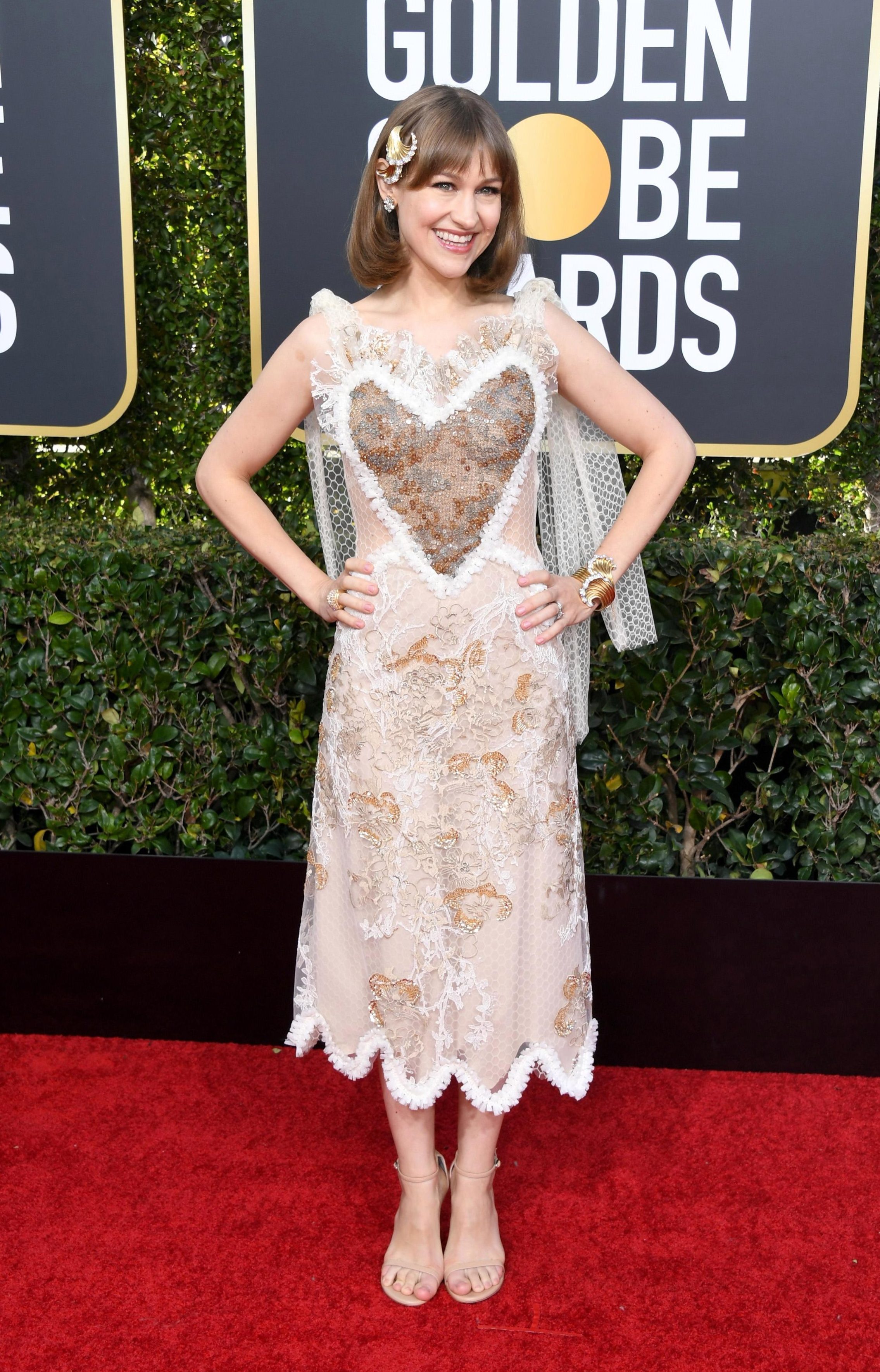 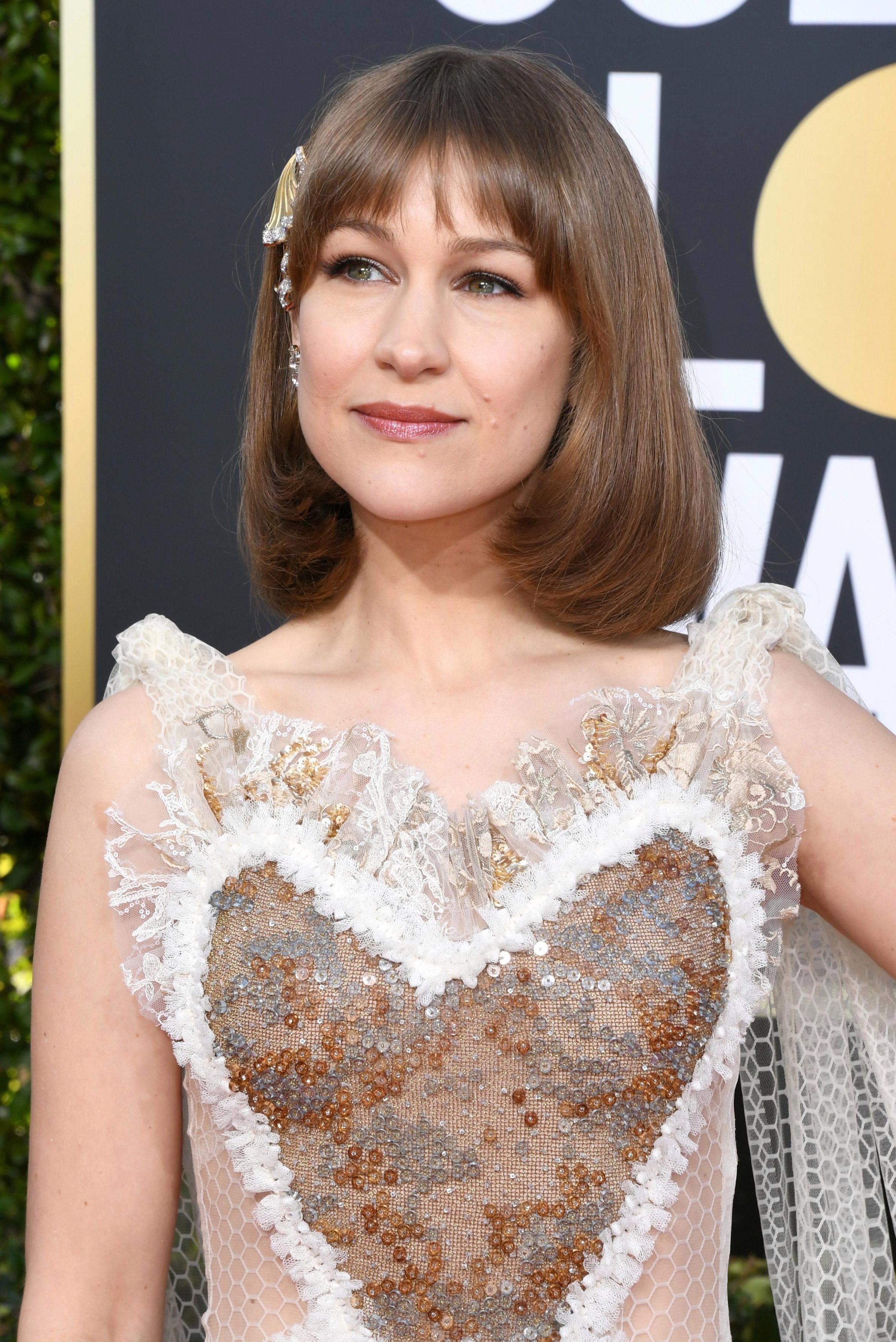 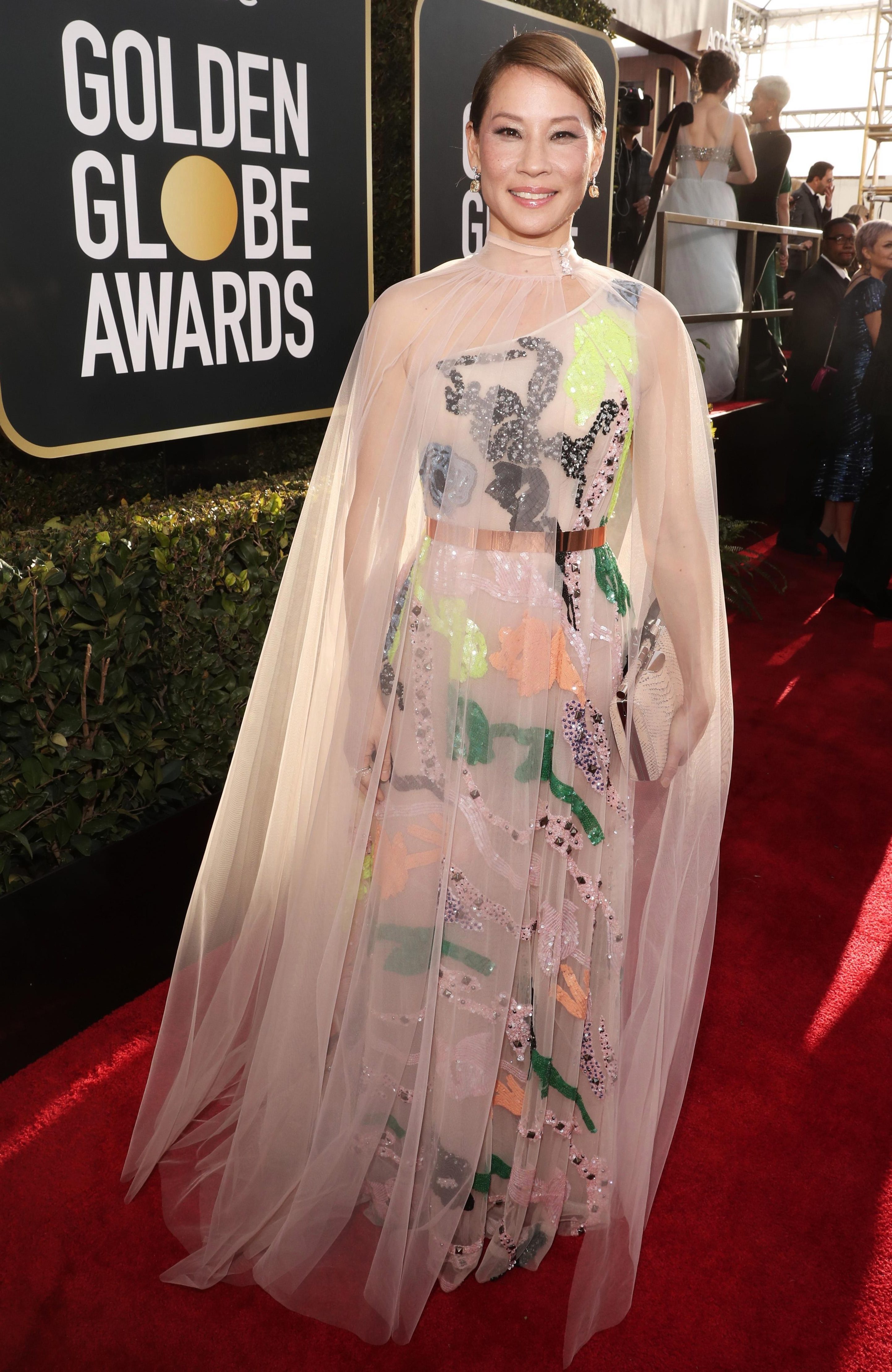 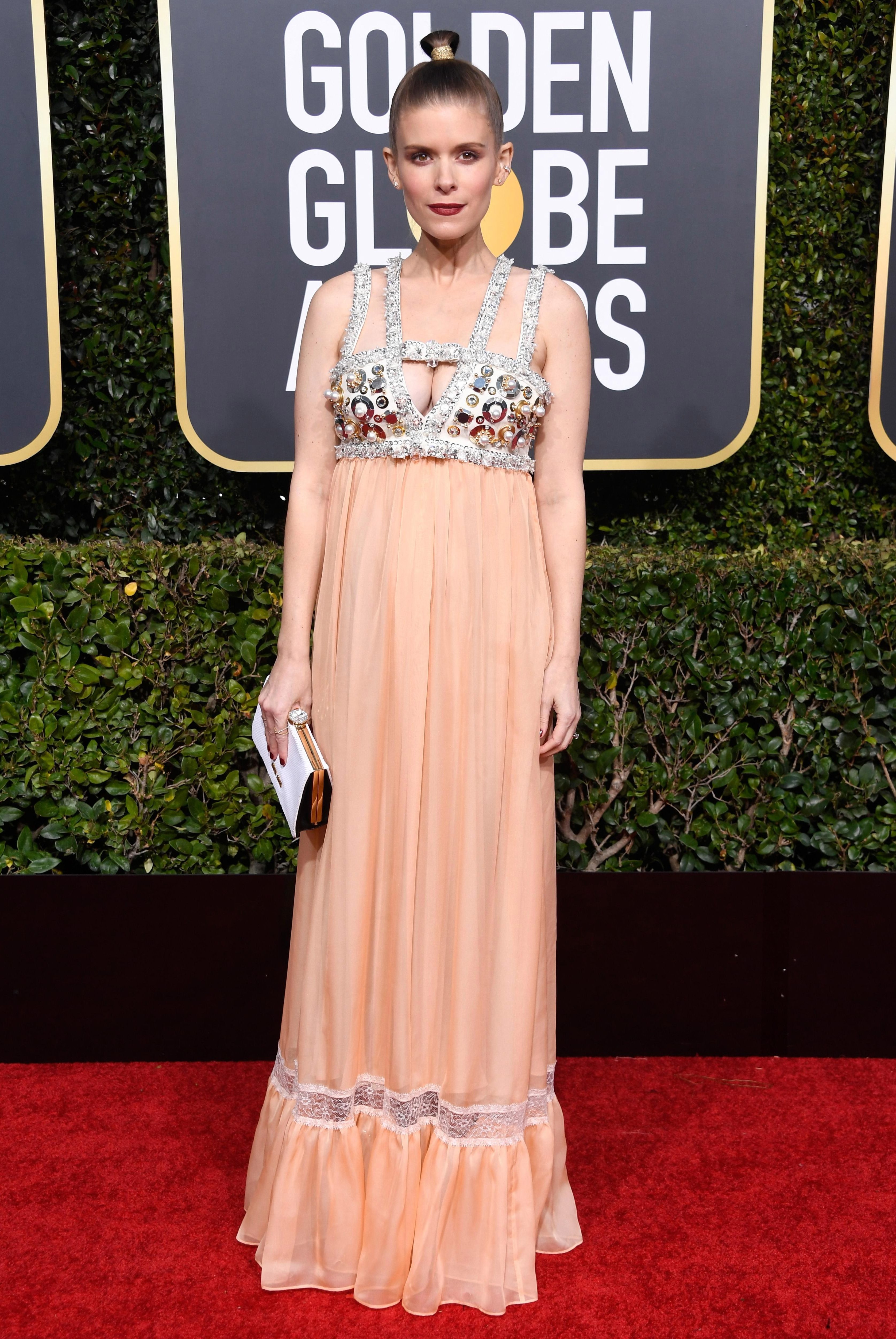 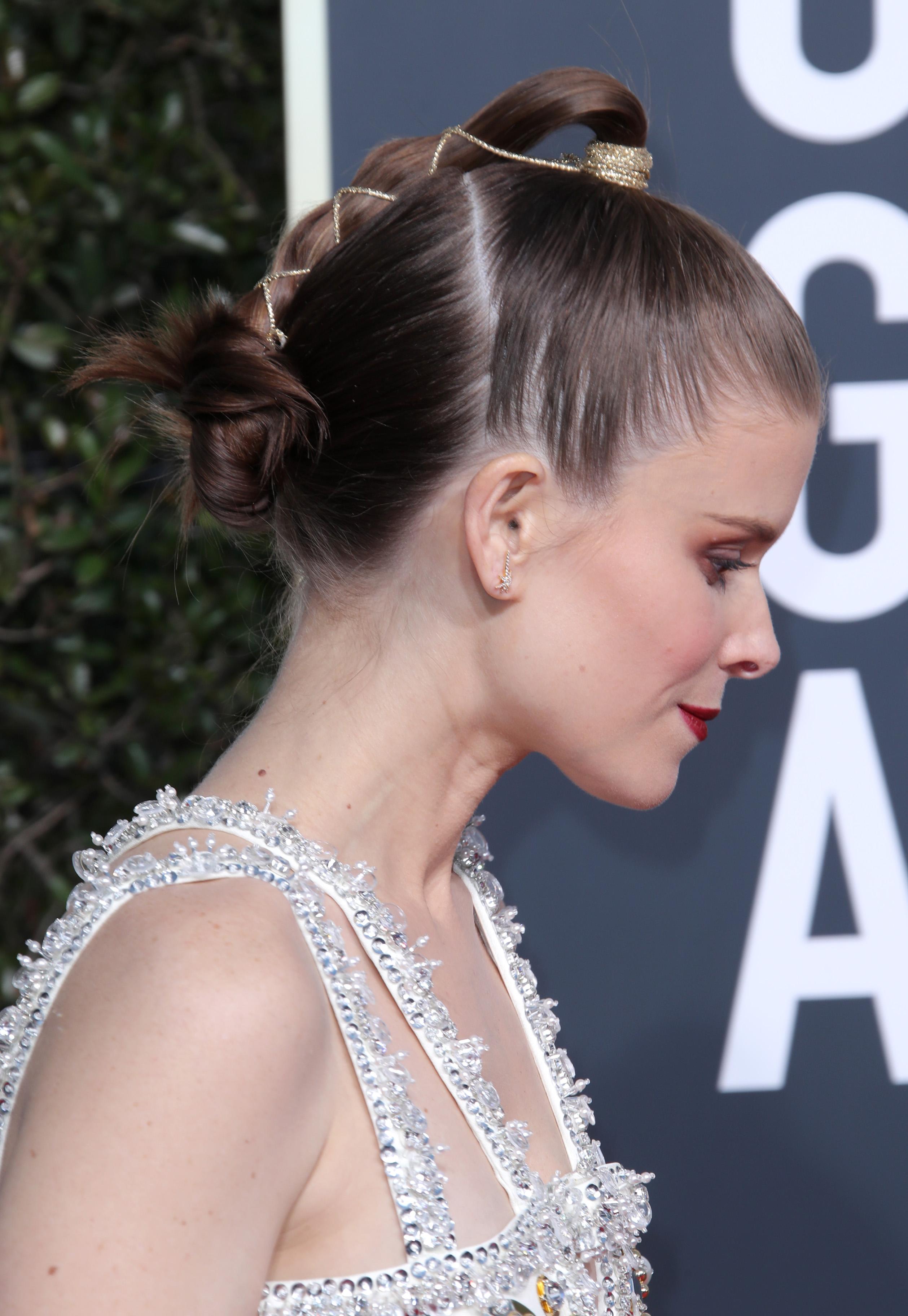 Actress Judy Greer opted for a very formal look, arriving on the red carpet in a box-fit velvet tuxedo by Alberta Ferretti.

The 43-year-old wore an oversized double-breasted blazer and wide-leg trousers, teamed with a scrunchie and bow tie.

Also wearing a monochrome ensemble was Sofia Carson who chose a bizarre, floor-length gown teamed with a bold red lip.

The fitted design by Giambattista Valli featured an embroidered sheer overlay complete with frilled tulle around the decolletage and a satin bow around the waist. 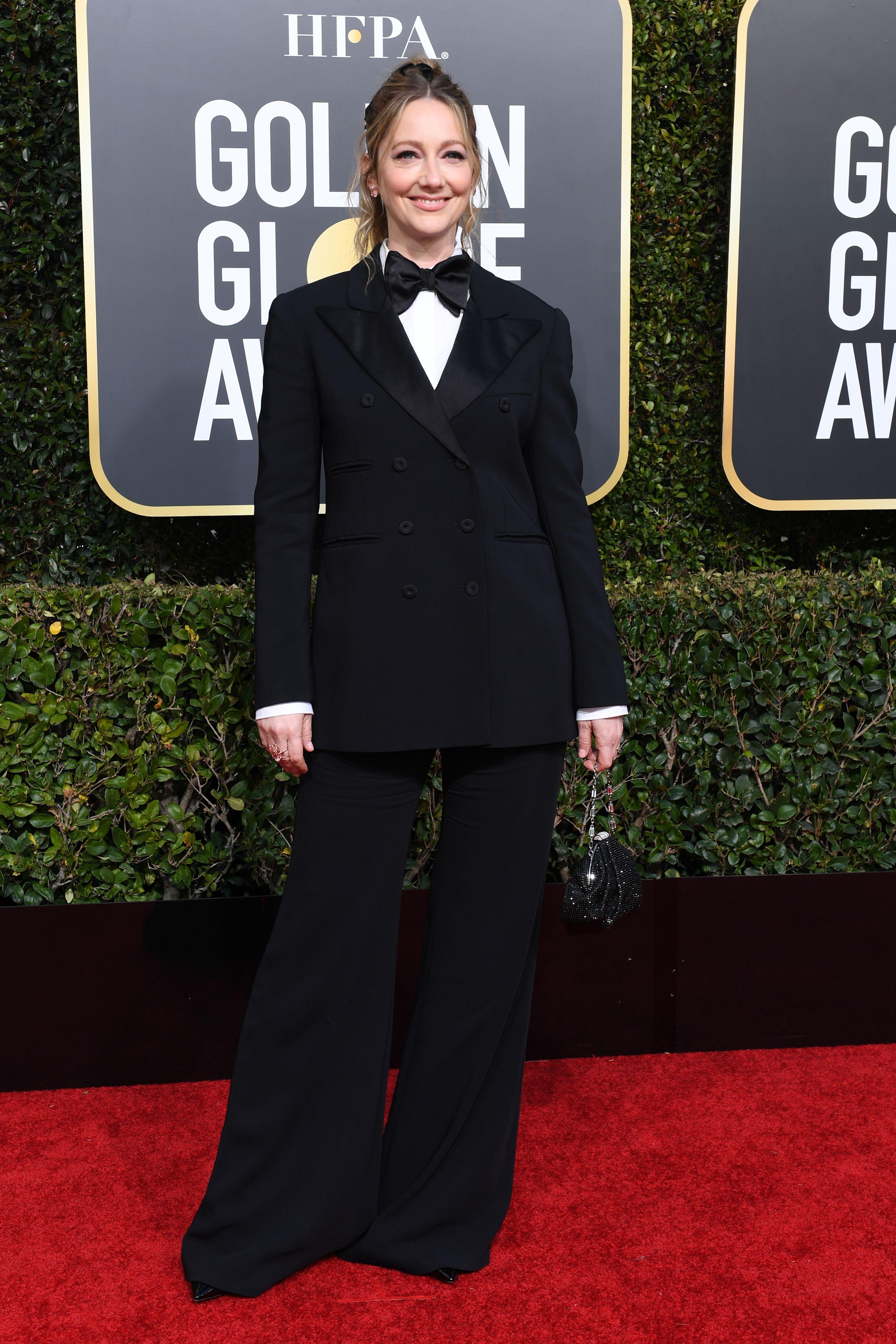 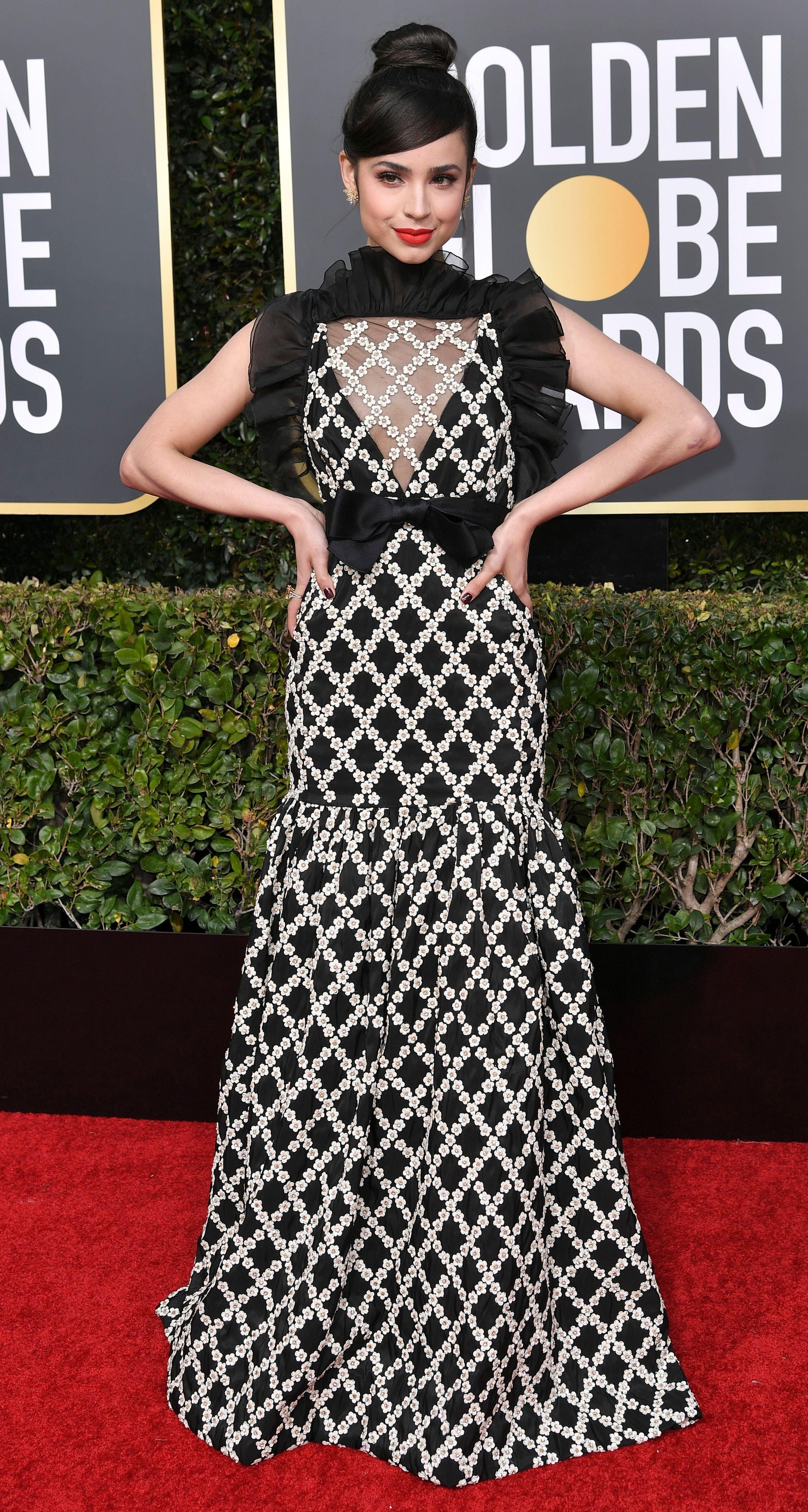 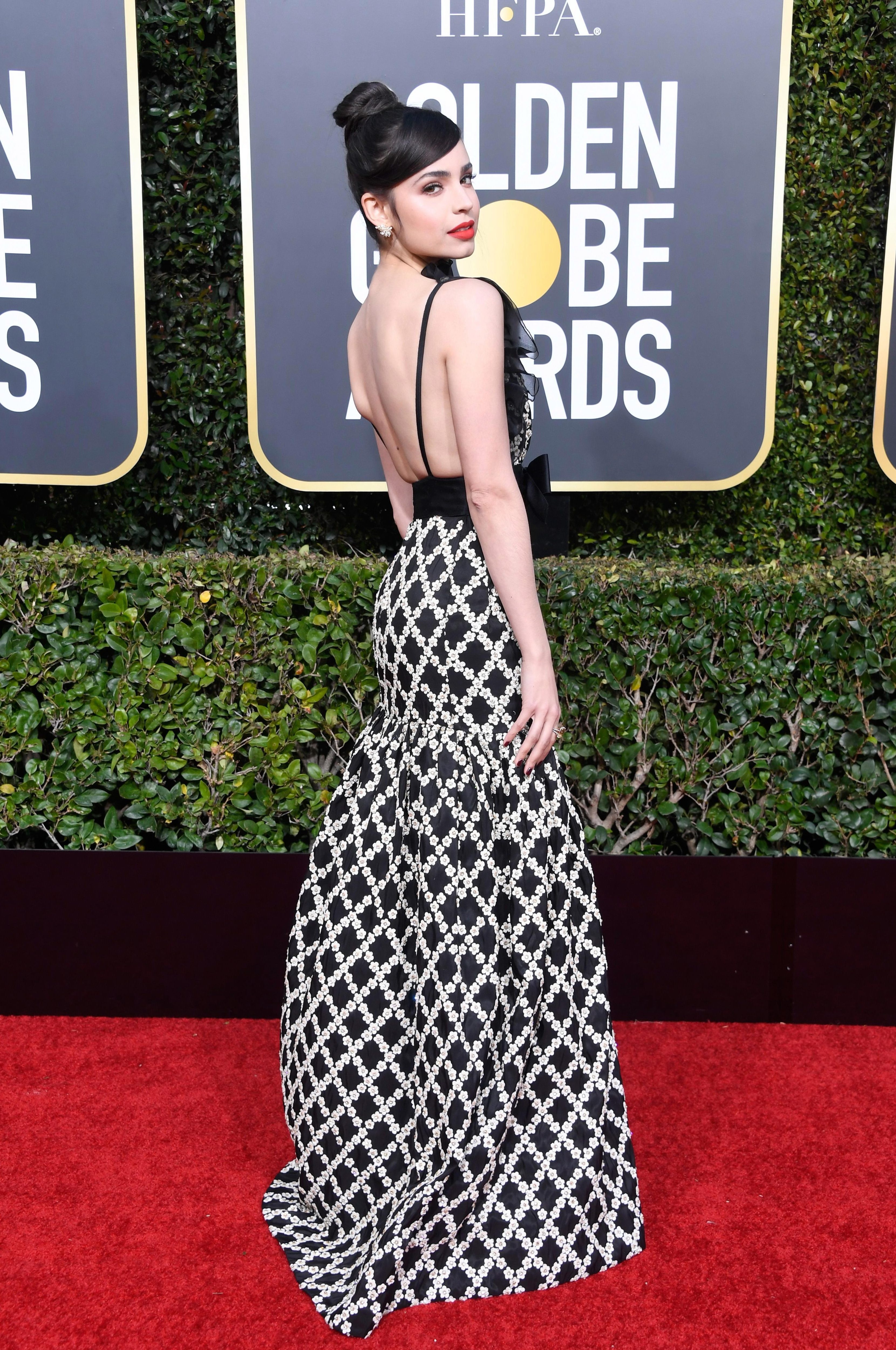 Several stars – including D'Arcy and Jameela Jamil – have chosen to carry black and white "Time's Up" ribbons, designed by Arianne Phillips.

The ribbons symbolise commitment to creating and ensuring a safe and fair workplace for all women around the globe. 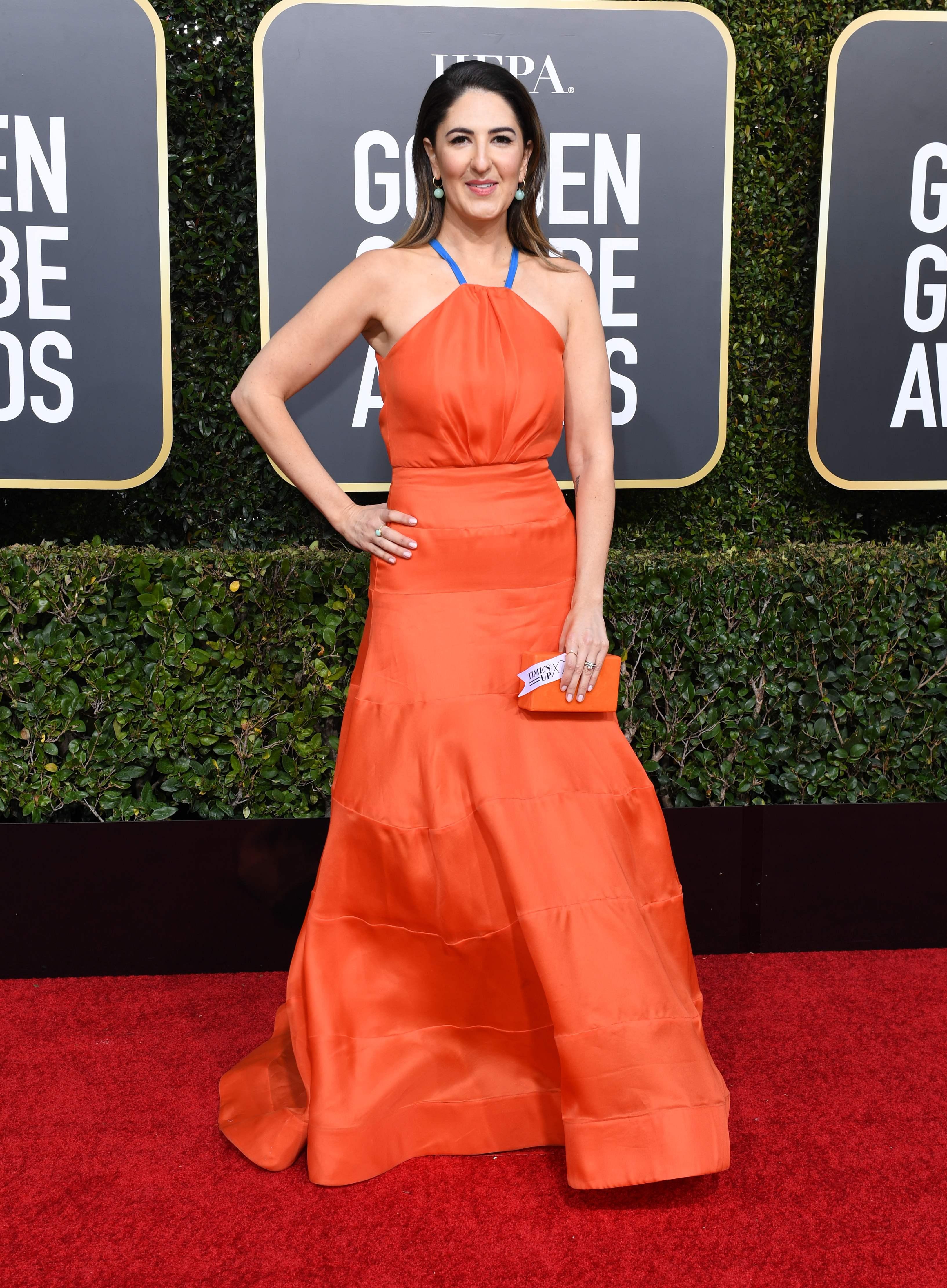 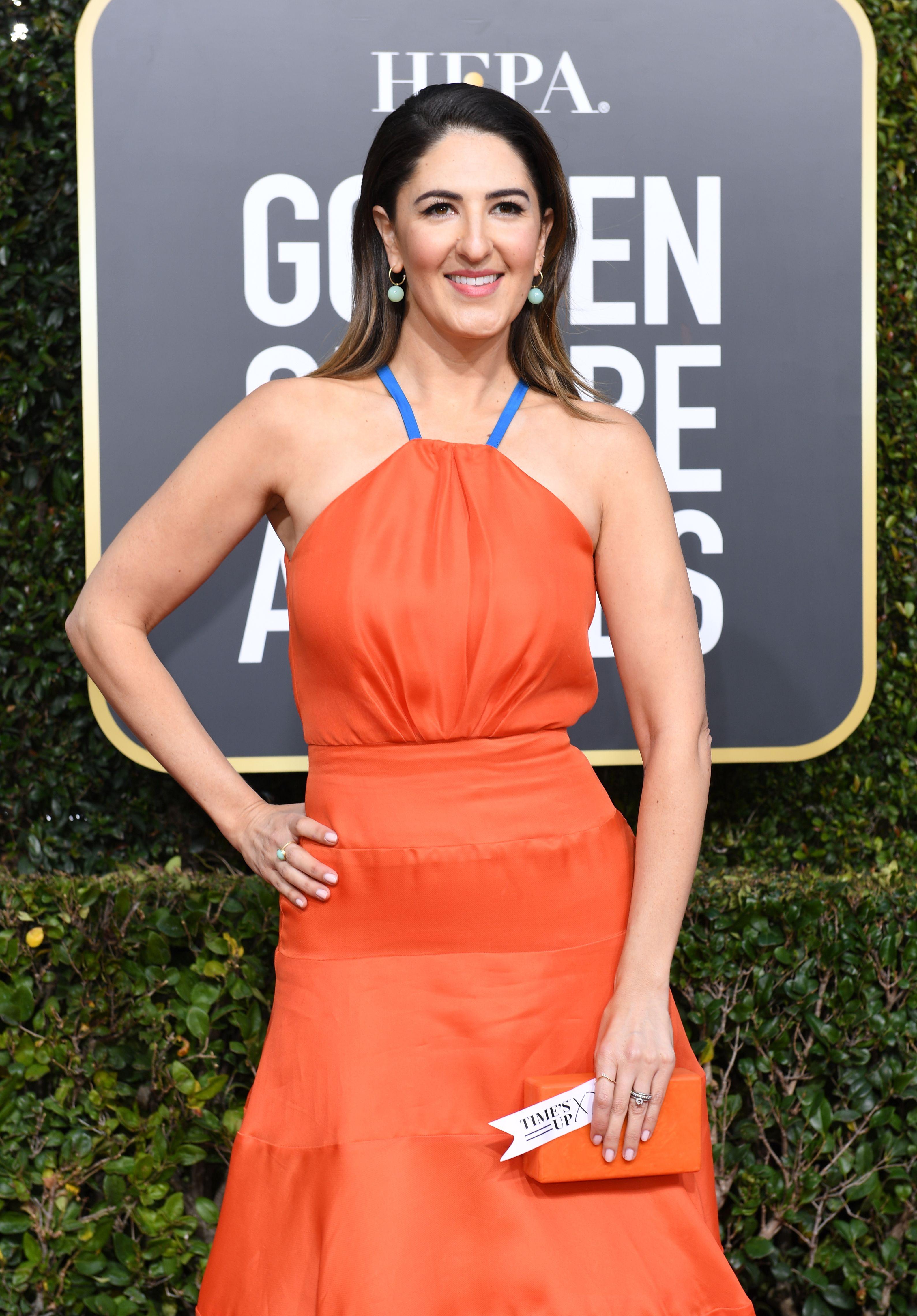 Penelope Cruz, 44 also chose a halterneck style and graced the red carpet in an iridescent black and purple gown. 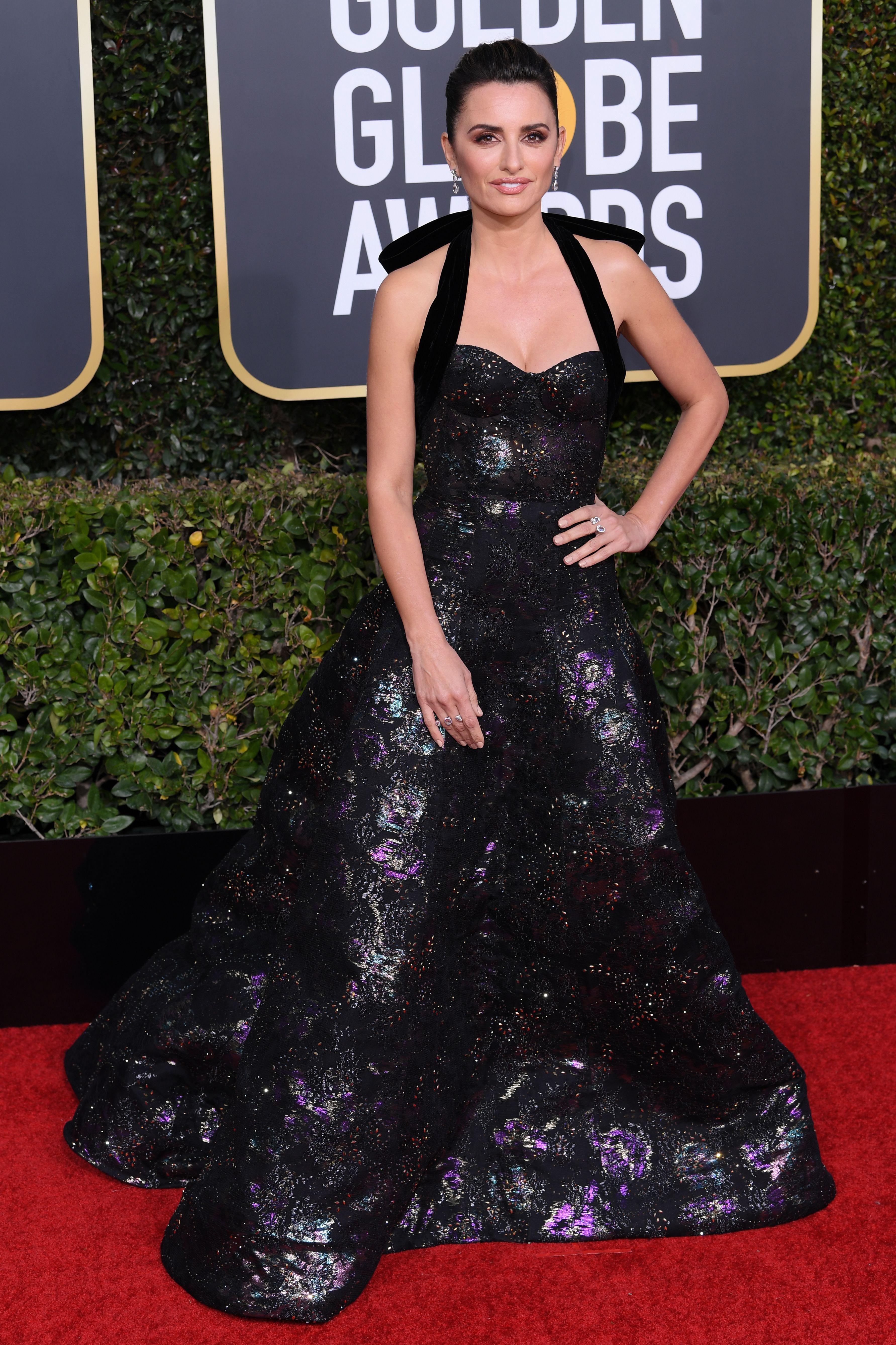 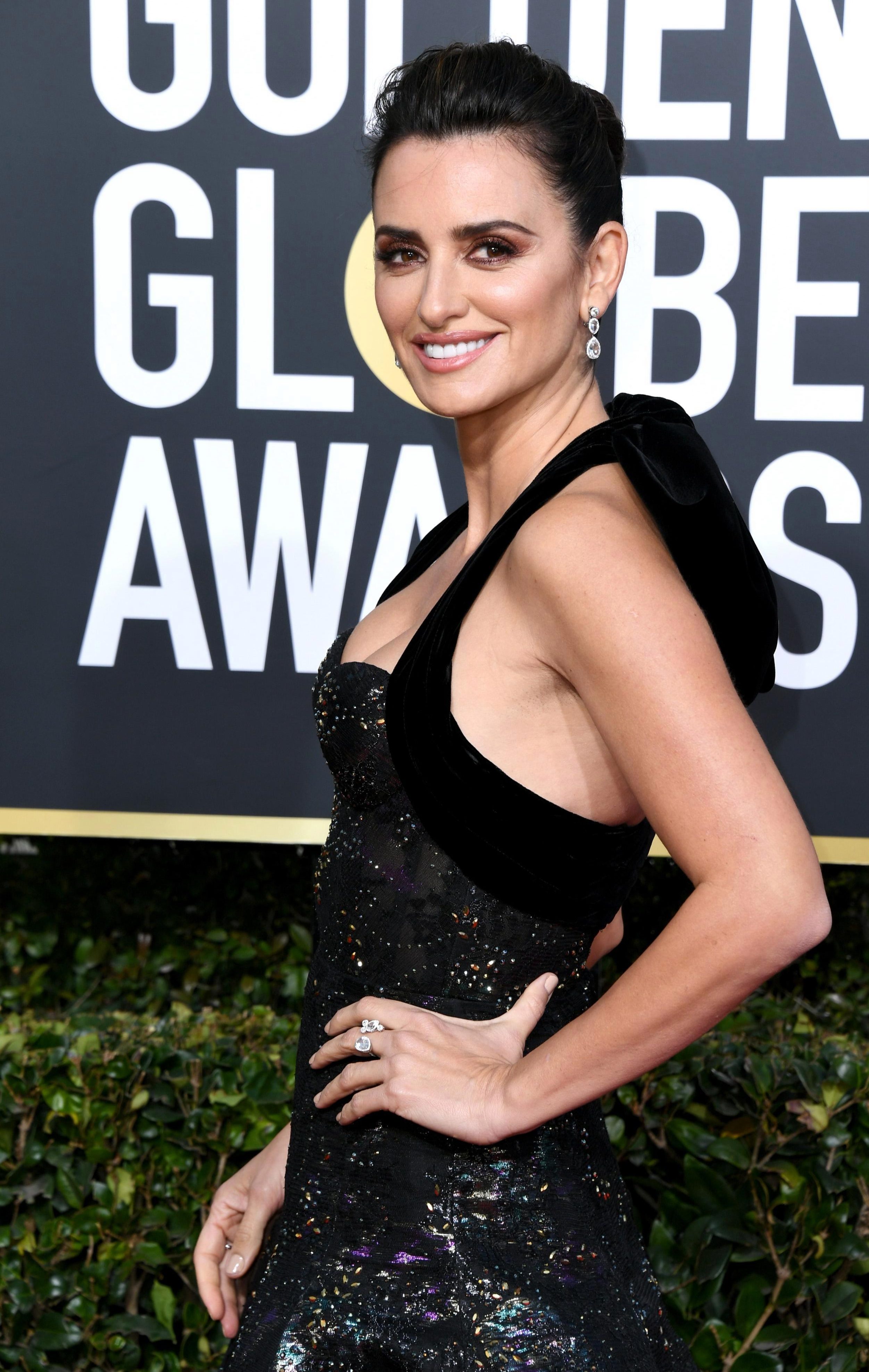 Another star who wore a rather bizarre look was Janelle Monae, who arrived at the awards in a gold, black and white ensemble by Chanel.

The quirky style featured a black and gold knitted tunic, complete with gold belt, white under skirt and an extravagant metallic, armour-esque neckline.

The Elie Saab design featured a metallic, animal print bodice and the actress teamed the ensemble with diamond earrings and strappy sandals. 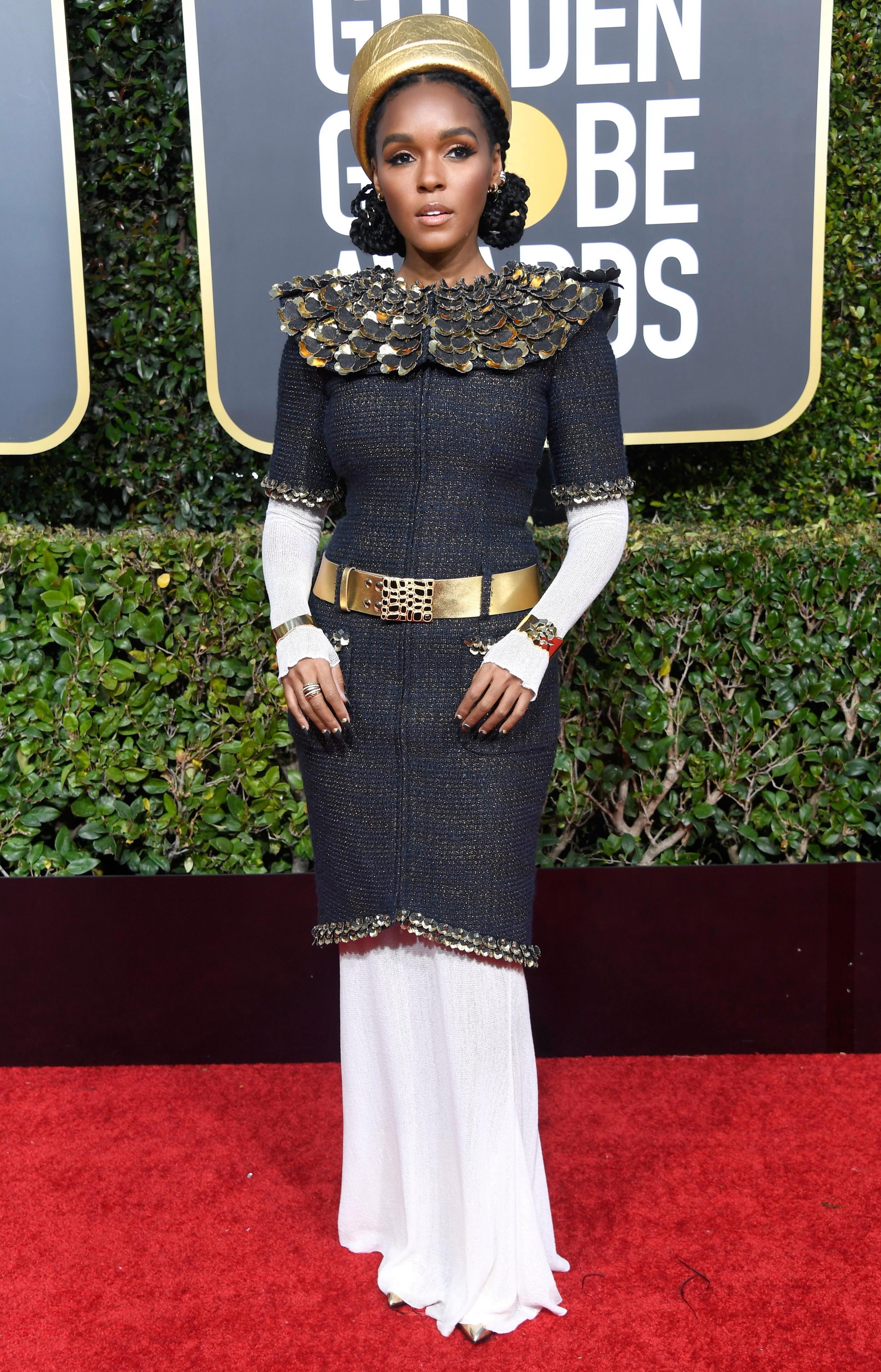 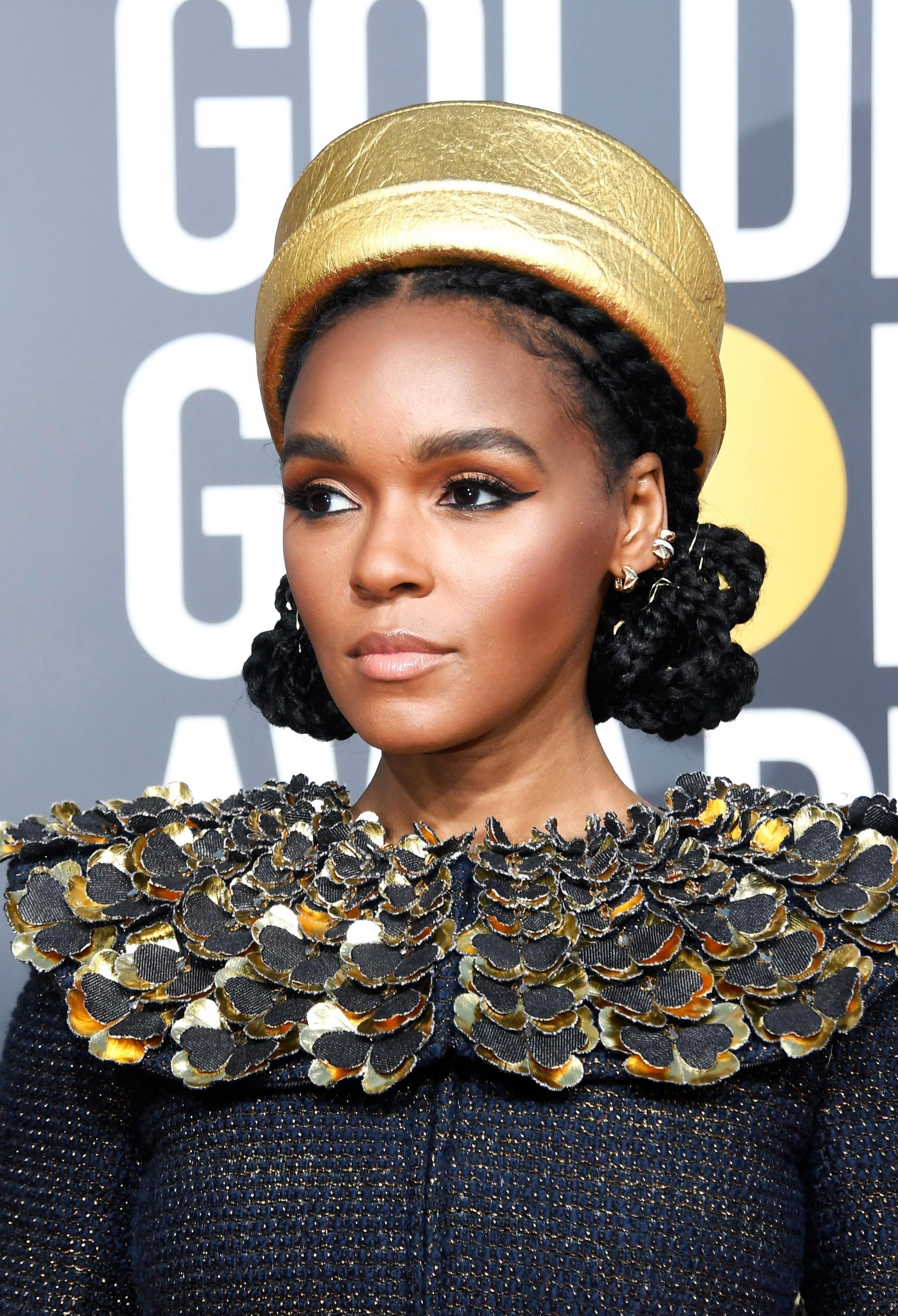 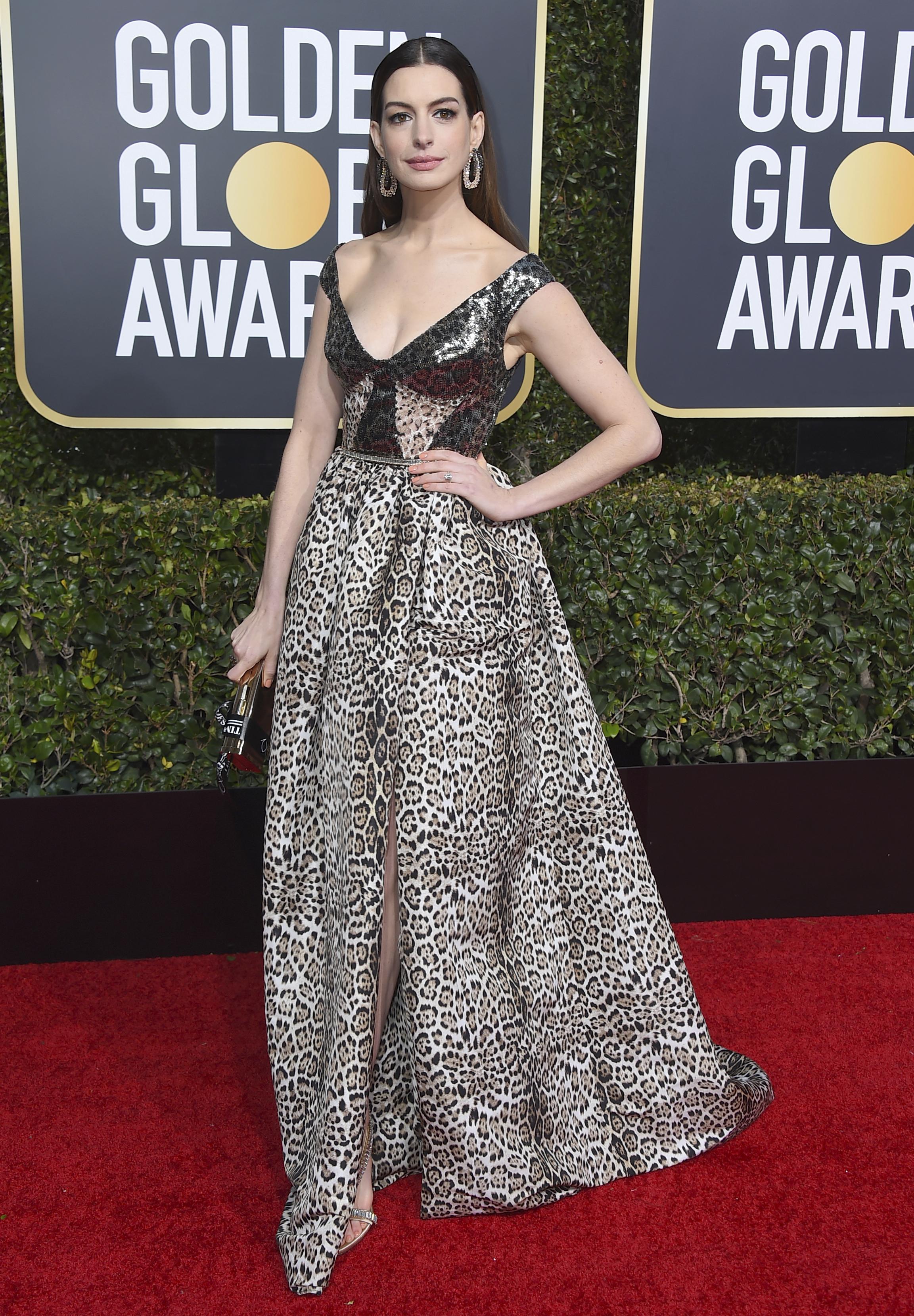 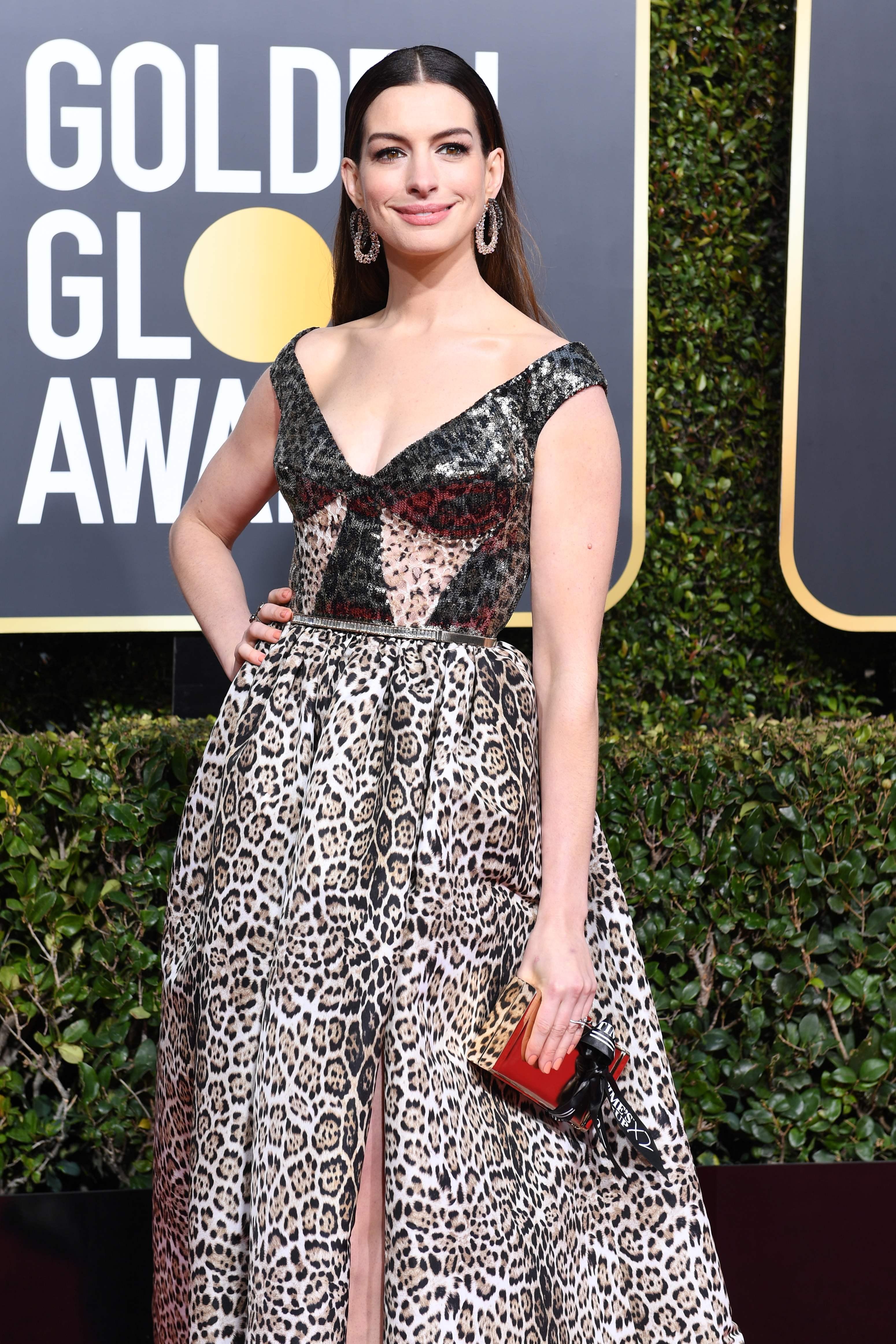 52-year-old Halle Berry flashed her toned pins on the red carpet this evening, but we weren't keen on her burgundy-coloured gown with see-through detail. 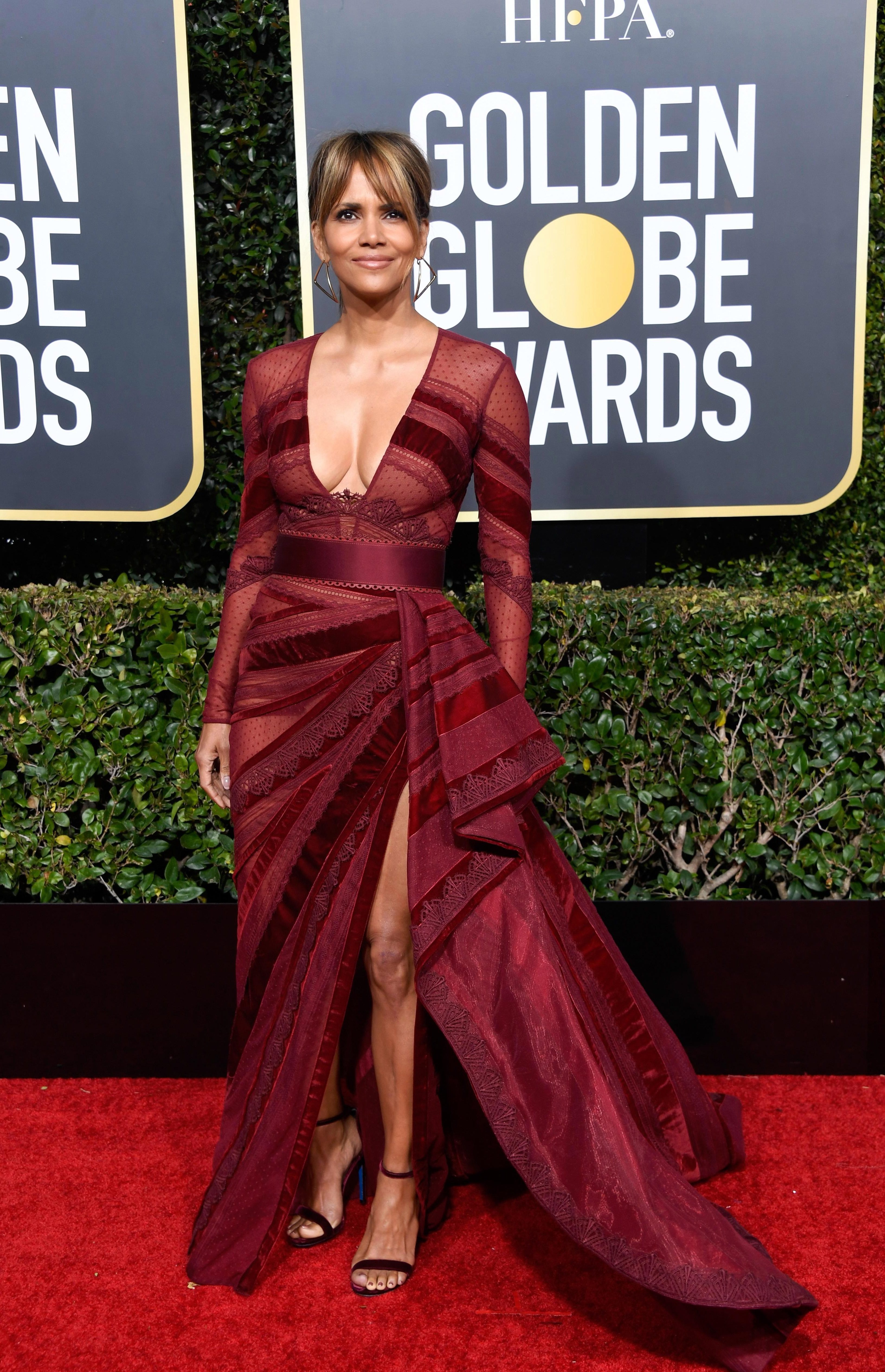 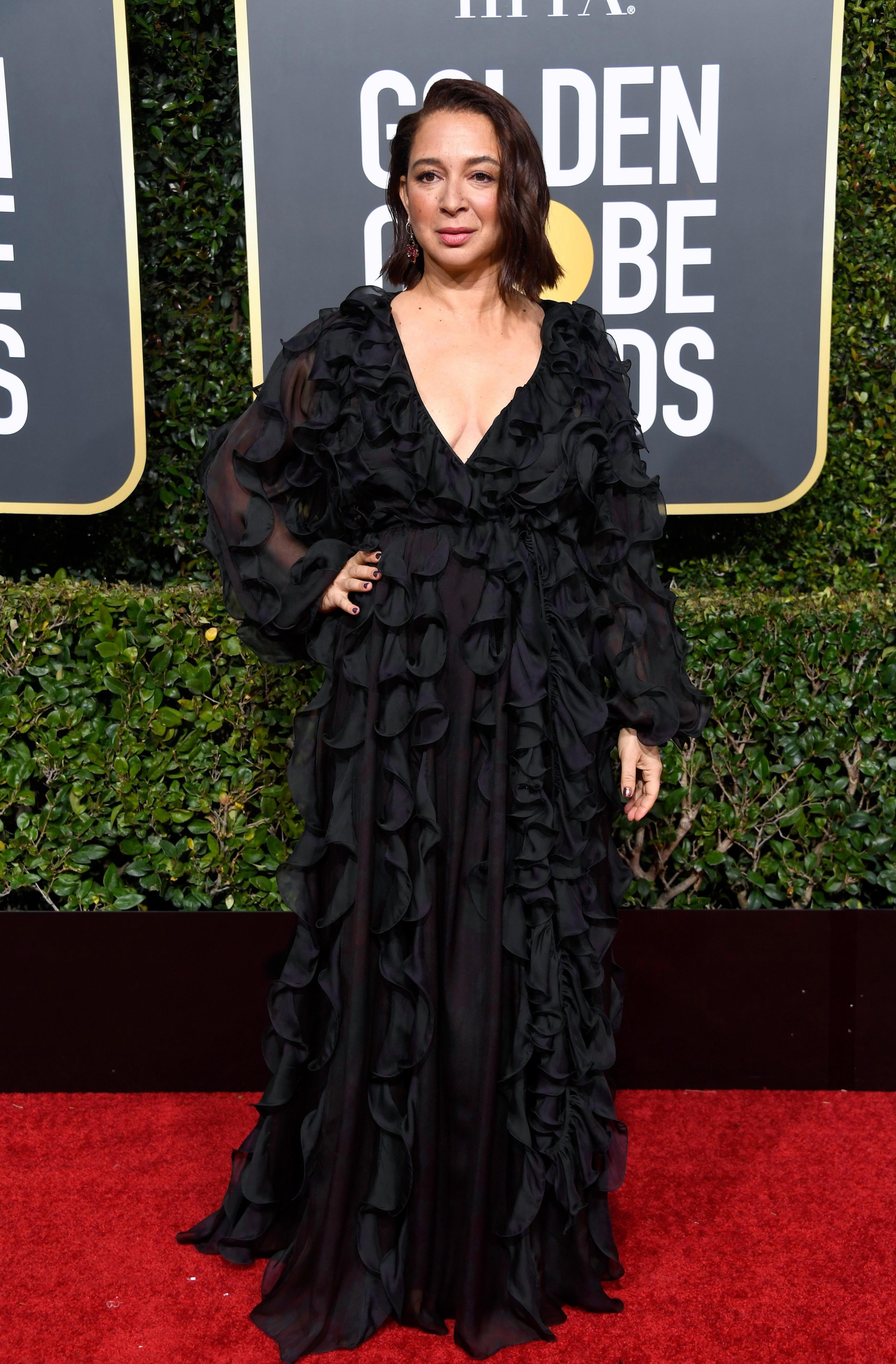 The Golden Globes is the first big awards ceremony in the Hollywood calendar.

It takes places five days before Oscar nomination voting closes and has had a big influence on the outcome of the Academy Awards in previous years.

This year, the ceremony is being hosted by Killing Eve's Sandra Oh, 47, and Brooklyn 99 star Andy Samberg, 40.

Both hosts have won a Golden Globe before – Sandra for her Supporting Actress role in Grey's Anatomy in 2006, as well as a Best Actress nomination for Killing Eve in this year's awards, and Andy for Best Actor and Producer on Brooklyn Nine-Nine in 2014.

Why did everyone wear black at last year's event?

Earlier this week, we told you about the most awkward Golden Globes moments of all time, including Lady Gaga bumping into Leonardo DiCaprio and Emma Stone’s epic hug fail.

And we showed you ex-Vogue editor Alexandra Shulman calls for glamour on 2019 Golden Globes red carpet – ‘not more MeToo misery’ with everyone in black.