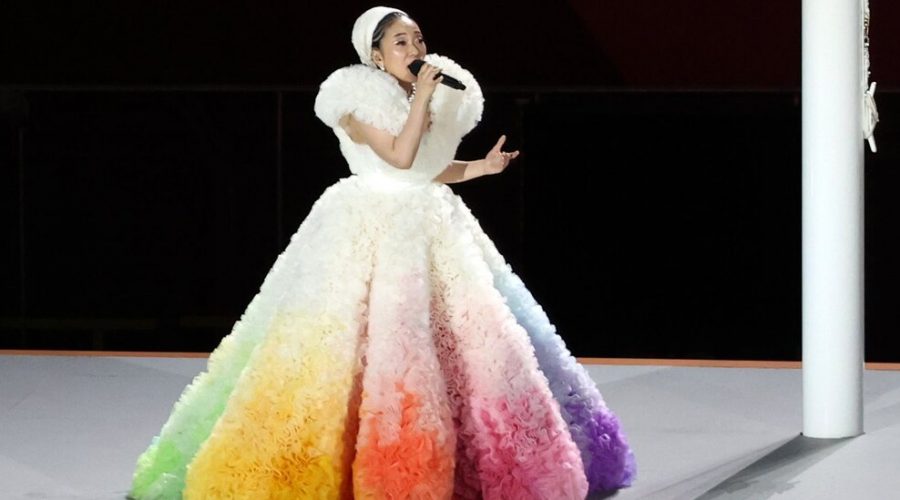 The 2020 Olympics in Tokyo have been among the strangest in memory. Delayed by a year, and unloved and underway in a host city that didn’t want them, the Games have still provided a bevy of brilliant sporting stories, including bold debuts and smashed records, underdog triumphs and superstar broken hearts.

They were also big on style. Wild tattoos and unisex team uniforms, kaleidoscopic hairdos and hand-knit cardigans: Tokyo has had it all. Here are some of the highlights.

Cupcake Couture by Tomo Koizumi at the Opening Ceremony

Tomo Koizumi gained international recognition after finding a fan in Lady Gaga, who wore his designs, and a breakout New York Fashion Week debut in 2019 masterminded by the stylist Katie Grand. Known for his frothy candy-colored organza ball gowns, the Japanese designer made headlines once again when he dressed the singer Misia for the Olympic opening ceremony.

As she sang the Japanese national anthem, Misia wore a vibrant rainbow-hued dress with puffed sleeves and dense white layers of recycled organza that cascaded toward the hem in cloudlike waves of spray-painted pink, orange, yellow and green. Forget the flame; for a moment, the creation of a self-taught, homegrown fashion talent lit up a near-empty stadium.

This year the most fashion-forward team uniforms weren’t on athletes from countries with fashion capitals, like the United States, Italy and France. Instead, it was Liberia that proved willing to take a leap of faith.

Liberia’s three athletes wore unisex unitards and silk mesh basketball tunics, one-shouldered tank tops and loosefitting tracksuits in shades of blue, red and white sprinkled with stars in a nod to the colors and symbol of the Liberian flag. They were the brainchild of the Liberian-American fashion designer Telfar Clemens, who is based in New York. Liberia may not have won a medal in Tokyo, but it went for gold when it came to the style stakes.

AirPods Everywhere (But Especially on Skaters)

Medals and Olympic ring tattoos weren’t the only ubiquitous accessory this year: AirPods were everywhere. In particular, they were in force at the skatepark, where dozens of athletes sailed through the air with beats from their buds blasting into their ears (and in some cases, the iPhones in their back pockets). The American skater Jagger Eaton even stopped to search for an AirPod he’d lost during a trick, before going on to win a bronze medal in the men’s street event.

Indeed, skateboarding, which made its official Olympics debut in Tokyo, brought with it new ideas on what it means to dress to perform as athletes, including the 13-year-old British bronze medalist Sky Brown in her pinstripe pants; Kokona Hiraki of Japan in a white Nike boiler suit; and the Finnish skateboarder Lizzie Armanto, who designed her own uniforms.

The Brouhaha Over the German Gymnasts’ Unitards

Female gymnasts competing at the Olympics have worn bikini-cut leotards for decades. But in the early qualifying rounds in Tokyo, the German women’s gymnastics team took to the mat in mid-sleeve, long-legged unitards. They were worn, the team said, in a stand against “sexualization” in the sport.

The subsequent controversy sparked major debate — on culture, on rule makers, on who gets to say what female athletes wear. The German team may not have progressed beyond the early rounds in Tokyo, but its choice of clothing left a lingering reminder of the latent objectification still faced by some female athletes.

Nor were the German athletes the only ones making statements with what they wore. Three members of the United States men’s fencing team wore pink masks to protest the presence of a teammate accused of sexual misconduct.

The Winning Hair and Nail Choices

From Naomi Osaka’s scarlet braids and the hurdler Christina Clemons’s butterfly clips, to the sprinter Shelly-Ann Fraser-Pryce’s two-tone neon ponytail and the weight lifter Emily Jade Campbell’s half and half colored space buns, Tokyo has been awash with unapologetic and individualistic hair styles. In part, this is a reflection of modern athletes’ mind-sets and determination to be themselves. And for some Olympians, bold hair, acrylic nails and jewelry are a celebration of Black female prowess on a high-profile global platform.

The British track star Dina Asher-Smith’s highbrow manicure by the nail artist Emily Gilmour featured a recreation of the Japanese Hokusai artwork “The Great Wave Off Kanagawa.” The Swiss tennis player Belinda Bencic, the French shooter Mélanie Couzy and the Hong Kong swimmer Camille Cheng all wore patriotic tips. And at least one athlete offered a performance-focused slant for her look. Sunisa Lee, who won the all-around gymnastics gold for the United States, said that her long, square-shaped Olympic rings acrylics (courtesy of Little Luxuries Nail Lounge in Minneapolis) brought her “good luck” and helped her compete.

“Whenever I miss the bar, it hurts really bad, so it makes me catch the bar,” Ms. Lee said. “That’s why I get them.”

Inked Skin Was In, Despite Local Tattoo Taboos

Tattoos may be considered taboo in Japan, but they were omnipresent on the elite athletes gathered in Tokyo. While countless stars have Olympic rings commemoratively inked on their feet, arms, necks or abs — the gymnast Simone Biles and the swimmers Caeleb Dressel and Adam Peaty among them — others showed off more ambitious body art.

“It slowly just became an addiction,” the American skateboarder Nyjah Huston said of his sprawling sleeve and neck tattoos. Mr. Peaty, of Britain, who has a large lion on his arm, said the tattoo “represented not fearing who I am up against.”

And the Puerto Rican hurdler Jasmine Camacho-Quinn paid tribute to the “todo es posible” (anything is possible) tattoo on the inside of her wrist. She got the tattoo after falling in the semifinals in Rio in 2016.

“I wasn’t going to let that race take over my life,” she said after winning gold in the 100-meter hurdles in Tokyo. “It’s on my lead arm when I run. It comes up to my face. So it’s kind of like a message too.” (She also has a tattoo of Puerto Rico overlaid with Olympic rings on her bicep.)

Ms. Liukin clearly honed her personal style from her own time on the mat: She is the 2008 Olympics all-around champion and a five-time medalist for the United States. As a pundit for NBC this year, she brought her wardrobe A-game to Tokyo. The looks included a tangerine power suit with matching Nike sneakers, a shimmering raspberry jacket and leather shorts, a one-shouldered pink pantsuit with flared legs and a braid inspired by Elsa from “Frozen.”

Ms. Liukin’s stylist, Gabriela Tena, told Women’s Wear Daily that there had been intensive preparation for her moment in the spotlight.

“Everything is thought out, really symbolic and very detailed regarding the colors that she’s wearing,” Ms. Tena said. “We try to do a different color for each look.”

Tom Daley Unwinding in the Stands

Days after Tom Daley won his gold medal in the men’s synchronized 10-meter platform, the British diver became the center of attention once again when he was spotted knitting in the spectator stands. The internet was in stitches.

It soon emerged that Mr. Daley’s talents extend far beyond making purple dog sweaters. On a dedicated Instagram account with almost a million followers, he posts snaps of his crafty creations, including colorful crochet sweaters that would give Jonathan Anderson a run for his money, and a little flag-emblazoned pouch for the latest addition to his trophy cabinet.

“The one thing that has kept me sane throughout this whole process is my love for knitting and crochet and all things stitching,” he said in a video, before displaying his latest and most ambitious D.I.Y. project yet: an oversize cream cardigan with the Olympic rings and “Team GB” on the back.