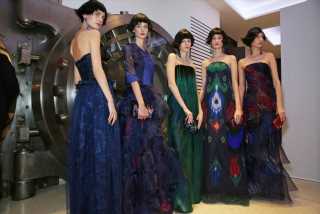 IN CAMERA: Faced with the continued high number of coronavirus cases in Italy, Giorgio Armani has decided to stage his Armani Privé runway show without an audience.

The designer, who skipped his regular show during Paris Couture Week in July, had initially planned to hold the Armani Privé show in his headquarters on Via Borgonuovo in Milan on Jan. 26.

“Due to the ongoing emergency, it will not be possible to hold the event as previously announced,” Armani said in a statement. “With regret, Giorgio Armani announces that, contrary to his wishes, the next Giorgio Armani Privé show will take place behind closed doors, in Milan, without an audience.”

The runway display will take place at 7 p.m. CET and will be livestreamed on the brand’s social media channels as part of the Paris Couture Week calendar. Armani said in May last year that he planned to show a seasonless collection, including outfits suitable for winter as well as lighter pieces for summer.

“The activity of the ateliers has not ceased in recent months: the demand for new and special clothes from customers continues,” he said in his update. The made-to-measure atelier was reopened in June for individual appointments, offering a wide selection of styles from current and previous collections.

01/06/2021 Fashion Comments Off on Giorgio Armani to Stage Couture Show Without Guests
Recent Posts
We and our partners use cookies on this site to improve our service, perform analytics, personalize advertising, measure advertising performance, and remember website preferences.Ok