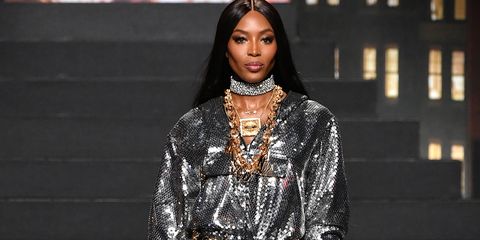 With just a few weeks left until Moschino x H&M hits stores, the collaboration made its runway debut last night with an all-star model lineup in New York.

The show, which saw Joan Smalls, Winnie Harlow, Candice Swanepoel, and all three Hadid siblings hit the runway, was opened by Gigi Hadid and closed by none other than Naomi Campbell. The iconic super served as the finale look in a sparkling silver mini dress, layered chain necklaces, and over-the-knee boots.

Meanwhile, Gigi Hadid opened the show in a hoodie sweatshirt dress topped off with a gold puffer, over-the-knee boots, and an abundance of gold jewelry.

Making it a Hadid family affair, Anwar and Bella Hadid also graced the runway, with Bella wearing a sexy black leather dress from the collection.

Much like the runway casting, the collection was diverse. As first revealed in the look book, the Moschino x H&M collab offers up a range of influences from MTV to Disney, hip hop culture, and over-the-top bling—all of which feel true to Moschino’s signature aesthetic. There were black and gold chain ensembles, logo sweatshirts, and colorful faux fur coats—making for an eclectic hodgepodge of runway looks.

As for the show itself, Jeremy Scott transformed the venue into its own Times Square-esque setting complete with billboards, flashing lights, and street carts serving New York classics like hot dogs, falafel, and giant soft pretzels. For the Italian fashion brand, it was a way to fully invest in the New York scene—even if it was the touristy version.