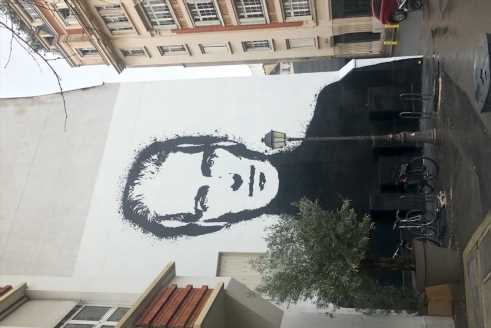 STREET STYLE: A supersized portrait of Hubert de Givenchy has gone up in Paris’ Marais district, three years after the designer’s passing.

Givenchy Parfums commissioned the work, which is a modern-day interpretation of a famous photograph of Givenchy by Victor Skrebneski. In black and white, it’s made to look like it was created with an airbrush and stencil, street-art style.

The two-story-high fresco, at the intersection of Rue Vieille du Temple and Rue des Quatre-Fils, shows the designer in a black turtle-neck gazing outward.

Givenchy, who died in March 2018, was considered as the true gentleman of fashion. He founded his eponymous house in 1952 and was best known to the general public as the creator of the film and personal wardrobes of his longtime muse, Audrey Hepburn, in movies including “Breakfast at Tiffany’s” and “Funny Face.”

Hepburn can also be credited with inspiring the launch of Givenchy fragrances, an empire in its own right for more than 40 years, founded under Givenchy’s late brother, Jean-Claude.

In 1954, Givenchy created a custom floral scent for his friend and muse. When he informed her three years later that he planned to commercialize the scent, Hepburn allegedly declared, “I forbid you,” an assertion that gave birth to the name L’Interdit (or Forbidden) and started a fragrance legacy.

Other scents, such as Amarige and Very Irresistible, followed.

With his perfect manners and old-school discipline, the couturier had a distinguished presence that colored the fashion industry for more than 50 years. He left behind a fashion house that defined the very notions of refinement and elegance.

The fresco of Givenchy will remain up until March 21.