Jeff Rohrer was sitting at a crowded tequila bar in West Hollywood, Calif., three years ago when Joshua Ross walked in and joined a conversation already in progress.

“This guy starts bragging about playing college football, and how he would have made it to the N.F.L. if he hadn’t been injured, same old boring war stories,” Mr. Ross said. “Jeff just sat there, smiling and drinking, and let the guy go on and on.

“That’s the kind of guy Jeff is, polite and respectful,” he added. “He’s not about to hurt anyone’s feelings.”

Mr. Ross, 36, was just a young boy growing up in De Leon, Tex., a few hours from Texas Stadium, when Mr. Rohrer, 59, was playing linebacker for the Dallas Cowboys in the 1980s.

“Josh can be a little bit of a brat sometimes,” said Mr. Rohrer, laughing as he spoke, “but I love him to death.”

Mr. Rohrer, a 6-foot 3-inch, 228-pound tackling machine with America’s Team in his heyday, will wrap his arms around Mr. Ross on Sunday, and hold on tight, at Wattles Mansion Gardens in Los Angeles — where they will be married.

“I’m sure there’s going to be some people out there who have a negative reaction to this,” Mr. Rohrer said, “and I’m fine with it.”

Mr. Rohrer is the first known National Football League player to be part of a same-sex marriage. The man who once spent four quarters chasing quarterback Vince Ferragamo on a Sunday, will look like a million bucks on his wedding day thanks to Salvatore Ferragamo, which provided the midnight blue tuxedos that will be worn by both grooms (Mr. Rohrer will also be wearing black, patent-leather shoes by Ferragamo, while Mr. Ross will sport a pair of Rollover Black Velvet Shoes by Christian Louboutin).

“If I had told the Dallas Cowboys in the 1980s that I was gay, I would have been cut immediately,” Mr. Rohrer said. “It was a different world back then, people didn’t want to hear that.” 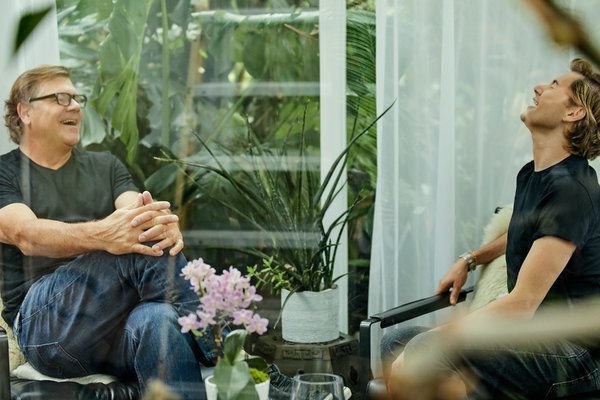 But times have changed, said Greg Aiello, the longtime N.F.L. senior vice president of communications, who retired earlier this year.

“While coming out was taboo back in Jeff’s day, the N.F.L. community is now very sensitive about this subject,” he said. “The league office and the teams have done a lot of work to ensure tolerance and inclusion in the workplace. There’s now a lot of sophistication about these kinds of issues.”

Mr. Aiello happened to be on the Cowboys public relations staff when Mr. Rohrer was selected in the second round of the 1982 N.F.L. draft, the 53rd overall pick. (He played in the league from 1982-87, his last three seasons as a starter.)

“Jeff was a bright and very personable guy that everyone liked,” Mr. Aiello said. “People who really know Jeff will be happy for him, and proud of him for living his truth.”

Mr. Rohrer said the truth didn’t come easy for some.

“I’ve given at least five people heart attacks with this news,” he said. “But for the most part, many of my closest friends, including some of my former teammates with the Cowboys, could not have been more happy and supportive.”

It was a first marriage for Mr. Ross, and second for Mr. Rohrer, whose first ended in divorce a decade ago. He has two children from that marriage: Isabella Rohrer, now 15, and Dondillon Rohrer, a 14-year old freshman playing high school football.

They will be joined on Sunday by 150 guests, most of whom will receive Champagne upon arrival, as well as a rose quartz stone (a symbol of love), and an amethyst stone (symbolizing friendship), in which to hold and place their hopes and wishes for the couple during their exchange of vows before the Rev. Jon Olson, a Universal Life minister.

After a photo session with both grooms and their families, guests will dine on grilled lamb chop lollipops with carrot harissa and market vegetable kebabs, and also enjoy a full raw bar with crab, shrimp and fresh oysters complete with live shucking and desserts, including a wedding cake by Sweet Lady Jane.

The two days leading up to the wedding will be just as festive for the couple. On Friday, they will host 50 of their closest friends and family, complete with dinner and a rooftop toast, at the Pali House in West Hollywood, and on Saturday evening they will host a Texas-style hoe down honoring their connection to the state with yellow roses and a barbecue at Sunset Ranch in Beachwood Canyon, Los Angeles.

Mr. Rohrer said that one of his wedding invitations was returned by a doctor friend “who actually thought it was a joke.”

“I guess he thought, ‘No way, this can’t be true,’” Mr. Rohrer said. “All I can do is hope that people can appreciate that everyone is different.”

When Mr. Ross walked into his life in May 2015, Mr. Rohrer said he was “completely in the closet.”

Billy Bean, the former baseball player who, like Mr. Rohrer, publicly announced he was gay after retiring from the game, said “it’s hard to explain how damaging the closet can be.”

“I think Jeff is going to be very happy about his decision to come out,” said Mr. Bean, now a vice president, special assistant to the commissioner of Major League Baseball. “I was paralyzed with fear until I stopped living in denial, but once I came out, my relationships with family and friends improved as I no longer had to be guarded around them.”

Mr. Rohrer let his guard down quickly once in the presence of Mr. Ross.

“I see this big, gregarious guy sitting there, though I wasn’t sure if he was gay,” Mr. Ross said. “But once we started talking, I realized he was.”

“What attracted me most to Jeff was his unselfishness,” Mr. Ross said. “I guess that came from being a husband and a father, and always making sure his family came first.” (Mr. Rohrer did not reveal to Mr. Ross until months after they met that he was once a professional football player.)

When Mr. Ross recalled several friends asking how he felt about taking on “the extra baggage,” referring to Mr. Rohrer’s two teenage children, he began to cry.

“Baggage? What baggage?” he asked aloud. “We are adding two beautiful children to our wonderful modern family.”

Mr. Ross, who earned his aesthetician license in Los Angeles, develops skin-care treatments at SkinLab, which he founded in 2014. Known in some circles as the “aesthetician to the stars,” he has enjoyed his own measure of fame since appearing last season in an episode of “The Real Housewives of Beverly Hills,” in which he gave facial treatments to all of the housewives, including Lisa Rinna, Teddi Mellencamp Arroyave and Camille Grammer, “all of whom are now regulars,” said Mr. Ross, who continues to be a main aesthetian source for such publications as Reader’s Digest, Us Weekly and In Touch Weekly magazines.

Mr. Rohrer, who grew up in Inglewood, Calif., played football at nearby Mira Costa High School in Manhattan Beach. He became an Ivy League star at Yale, and played all six of his N.F.L. seasons in Dallas alongside such Cowboys legends as Tony Dorsett, Randy White and Ed (Too Tall) Jones.

His television commercials have since earned Gold and Silver Lions awards at Cannes, and an Emmy. (His most notable commercial was for the N.F.L.’s, “Super Bowl Baby Legends.”) Mr. Rohrer is also a well-rounded artist — he paints, sculpts and is a master potter —who paints portraits of people he “would like to go to lunch with,” he said. His collection includes oil paintings of his former Dallas Cowboys coach, Tom Landry, as well as Vince Lombardi and Ted Williams.

According to SB Nation, a sports blogging network, there were only seven previously known gay players in N.F.L. history, none of whom came out during their playing days. (Four others, including Michael Sam, who played preseason games with the Los Angeles Rams, made it to various N.F.L. training camps, but never appeared in an N.F.L. game).

When asked why it took him so long to reveal his truth, Mr. Rohrer said, “people are born gay, as I was, though being gay was just something that had no place during the course of my football life.

“But when I got divorced, I said the hell with it, I’m going to do what I’ve always wanted to do,” he said. “Then I found Josh, and began to openly live the life I was born to live.”