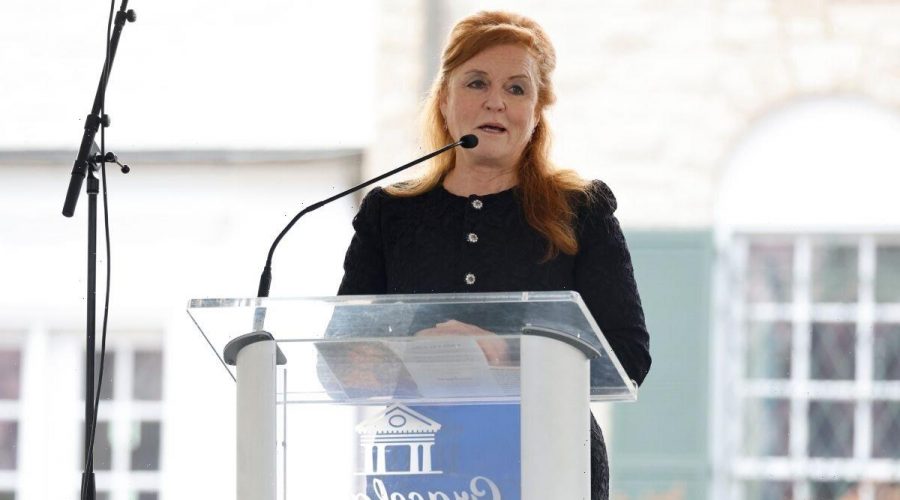 Sarah Ferguson spoke at the public memorial for Lisa Marie Presley in Memphis, Tennessee, who sadly died on January 12, 2023, at the age of 54. The memorial took place on Sunday, and the Duchess of York, who was a very good friend of the late singer, was one of the many celebrities to attend.

“You were my sissy, an amazing mother to Ben, Riley, Harper and Finley and a superbly loving daughter to Priscilla.

“You have been my devoted friend for many years and I am here for your family to support and love them. I am deeply saddened my sissy, you are in my heart.”

The Duchess stepped out at the memorial wearing her Dolce and Gabbana “Black Lace Coat Dress from SS14 Season”.

The coat dress looks like a black brocade coat gown with a black lace slip beneath.

The single-breasted coat which Fergie wore has five silver buttons and shoulder pads.

This is a repeat wear, with Fergie having worn the designer dress on two occasions before.

In 2014, the Duchess wore the dress for another memorial service, but this time was for Sir David Frost, an iconic journalist.

Then, in 2019, Sarah wore the beautiful lace dress at Ellie Goulding’s wedding, showing the versatility of the garment that it can be worn at weddings as well as more sombre occasions.

Four years ago at the celebrity wedding, Fergie accessorised her designer dress with a fancy monochrome feather fascinator and a pair of mules.

On her feet, the Duchess of York also wore cream shoes with black lace and a pointed toe back in 2019.

For the memorial service of Ms Presley, however, Sarah wore her ginger hair in a half-up, half-down fashion with a thin headband and looked extremely elegant for the sombre occasion.

She also wore some simple black high heels to match her all-black attire for the public memorial.

Sarah appeared to be wearing no visible jewellery and no excessive adornments, out of respect for the poignant nature of the memorial.

The Duchess paid tribute to the late Queen Elizabeth II during her memorial speech.

She said: “My late mother-in-law used to say that nothing [that] can be said can begin to take away the anguish and the pain of these moments because grief is the price we pay for love. And how right she was.”

The public service was held on the front lawn at the Graceland mansion in Memphis, Tennessee.

Elvis Presley’s only daughter died on January 12 after being rushed to a Los Angeles hospital for a possible cardiac arrest at 54 years old.

However, her death, which occurred just one day after the Golden Globes that Lisa attended, is still being investigated.