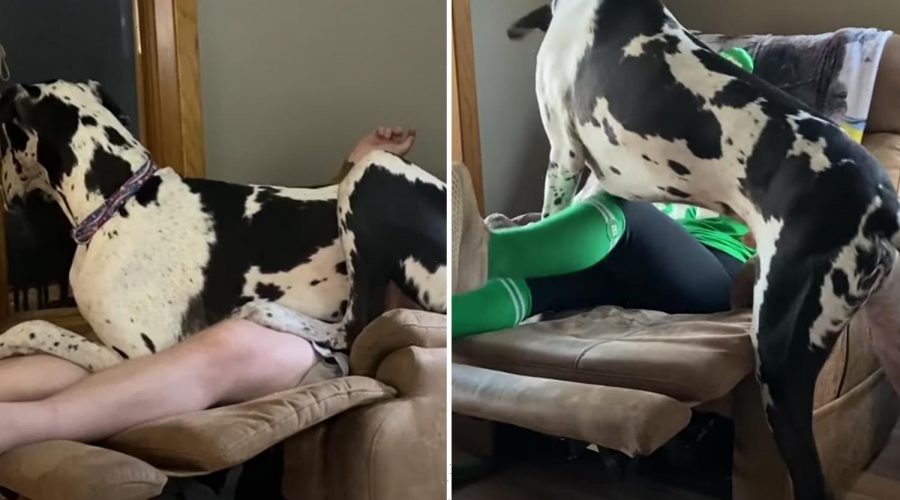 A SIX-FOOT Great Dane who "thinks he's a lap dog" has forced his owners to fork out more than $2,000 after he mangled THREE sofas – because the 168-pound beast can't resist leaping on them to enjoy cuddles with his family.

Larry loved affection as a pup and still wants affection despite the three-year-old now standing at six feet tall on his hind legs. 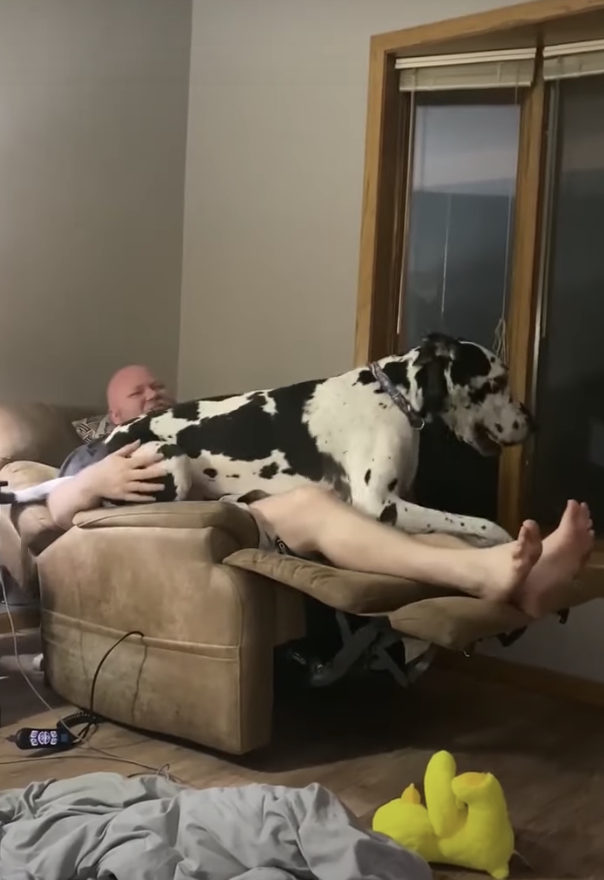 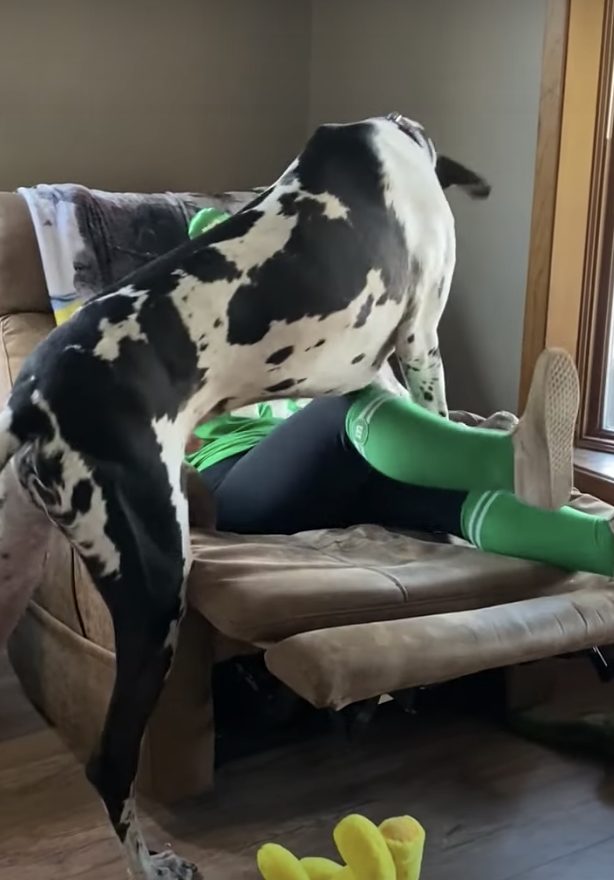 The 38-year-old has revealed her hound's hefty 128 pounds has busted foot stools, backrests, and arms of three recliners, leaving them to finally splash $1,000 on a "Larry-proof" one capable of dealing with his antics.

The dog is so tall he can help himself to food from the top shelf of the fridge and even enjoys his own room of the house – complete with a double bed.

Viral videos shared on the dog's 103,000-follower Instagram page show dad-of-three Ken Kempen, 40, relaxing on the sofa until troublesome Larry launches himself onto his lap.

Ken's shouts "oh s**t" before the pooch calmly stretches out to watch the TV – and more footage shows Larry carelessly springing from the audibly pained dad.

Beth explains he jumps to cuddle all the family, including their 12-year-old daughter Madalynn Kempen who "gets stuck" as she weighs around half as much as Larry.

She even complains the Great Dane’s leaps even leave the family with bruises.

Larry has become a viral sensation over the past couple of years, with fans loving to watch his "cute" lap dog-like mannerisms and laugh along with his family's reactions.

Beth, from Combined Locks, Wisconsin, said: "I knew Great Danes were big, but it's a different reality when you're living with a dog this big. Sometimes we'll fight it but when he wants to jump, he jumps.

"You never know when he's going to do it and he'll never take no for an answer. He'll do it to all of the family because if it's a lap he'll sit on it. He's got to be one of the biggest lapdogs in the world.

"Every night he'll block the TV. Ken will push him off his lap but then he'll jump right in. He knows that he's bigger so Ken has to give in. The jump is worse in the end because you get bruises.

"My daughter can't just push him off so she gets stuck there. He can be a little gassy too, so that's not nice when you get stuck under him. She has to call for help.

"She'll be doing her homework and Larry will just lie on top of her. We put up with it pretty well. In hindsight, we probably wouldn't have held him the first four months of his life.

"Ken always wanted a bigger dog, so we bought Larry as a puppy and we thought we needed to hold him all the time because he was going to get so big that we wouldn't be able to.

"That kind of blew up in our faces because now he needs to be held all of the time. He got used to the affection when he was younger. It was a mistake – now he's 12st.

"This recliner is our fourth in three years. We've had recliners pretty much fall apart because of Larry adding his body weight on top of whoever is sitting there. The chairs just can't hold that.

"On one, the back broke so it wouldn't sit up straight anymore, the footstool on one got all mangled so it couldn't go up and down, and the first one we had a long time before Larry but he buckled the arm out.

"We spent $1,000 on the last one because they said it would last, but we'll see. We told them we needed something with a good warranty and they laughed at us.

"It annoyed us at the time, but we blame ourselves. People say if they had a dog this size they'd stop him, but there's not much you can do to stop him jumping across the room.

"Despite everything we've made some truly amazing friends through our page and we love Larry so much. We wouldn't have it any other way."

Larry has been known to take food from the top of the fridge and eat leftovers from the sink, and he even has his own room in the four-bedroom house, fitted with a double bed.

Beth and Ken live with children Madalynn, Colin Kempen, 16, and their 16-year-old Yorkie Harley, while their third child John Kempen, 20, moved out earlier this year.

The family started the Instagram page to watch him grow and she says that within three months he was triple his size and is now bigger than 6ft Ken when he stands on his hind legs.

Footage of Larry jumping on Ken has been liked more than 1.6 million times, with being shocked by his "aggressive cuddles" and laughing at his lapdog tendencies. 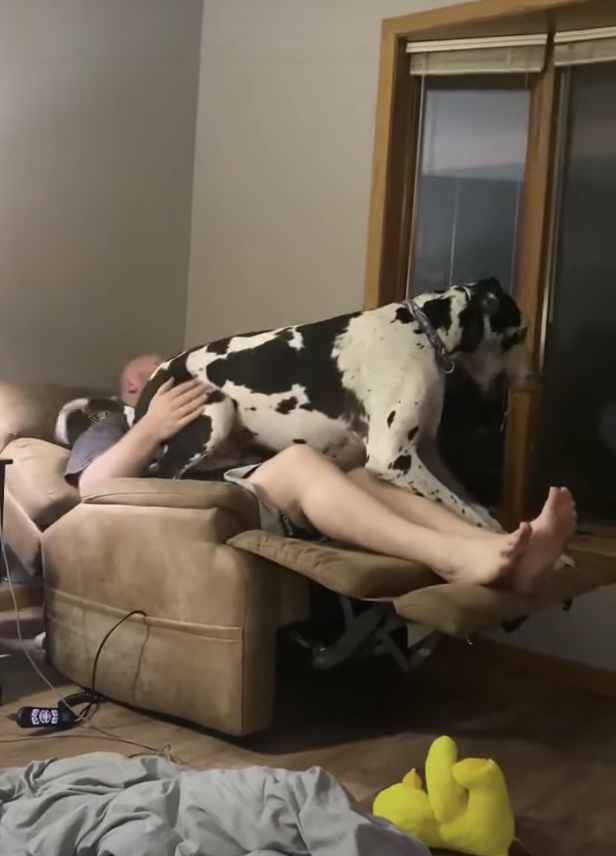 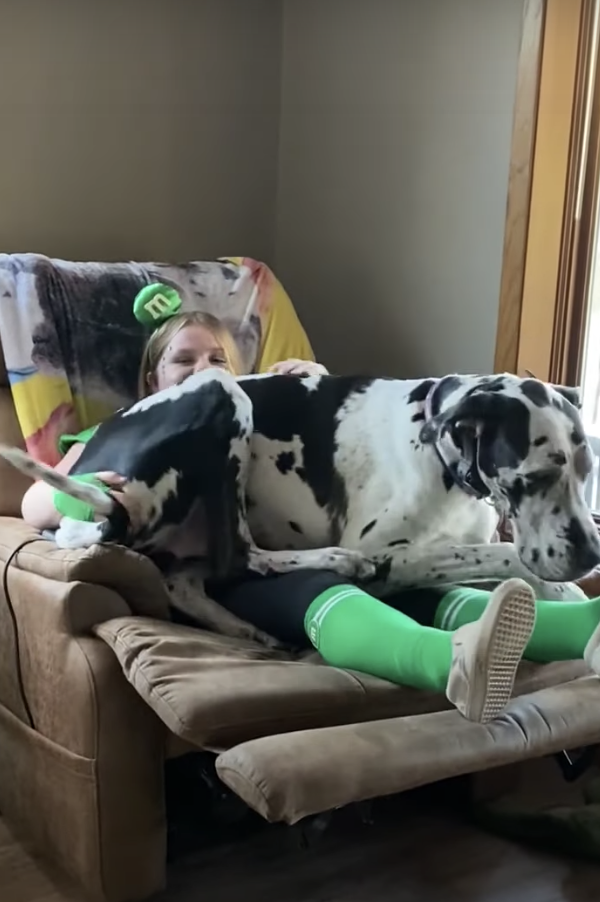 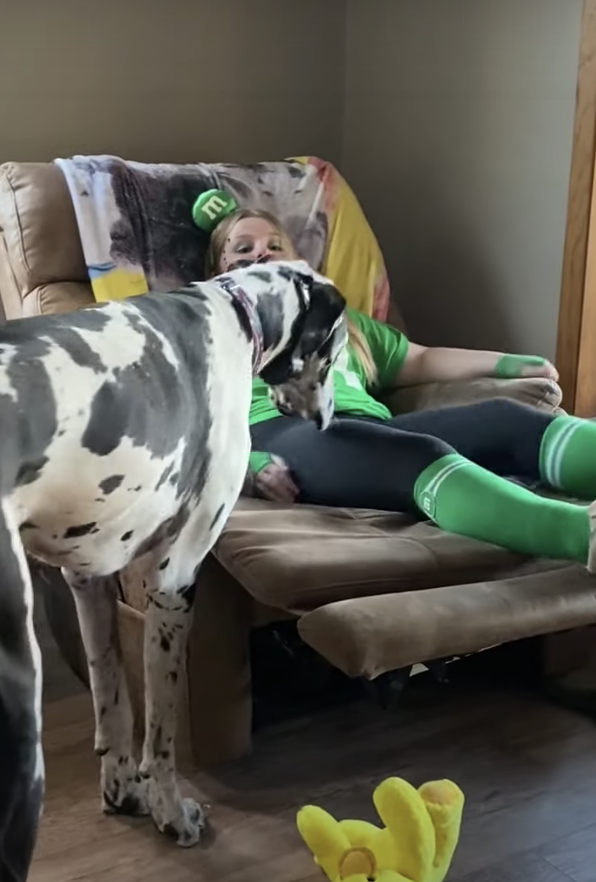