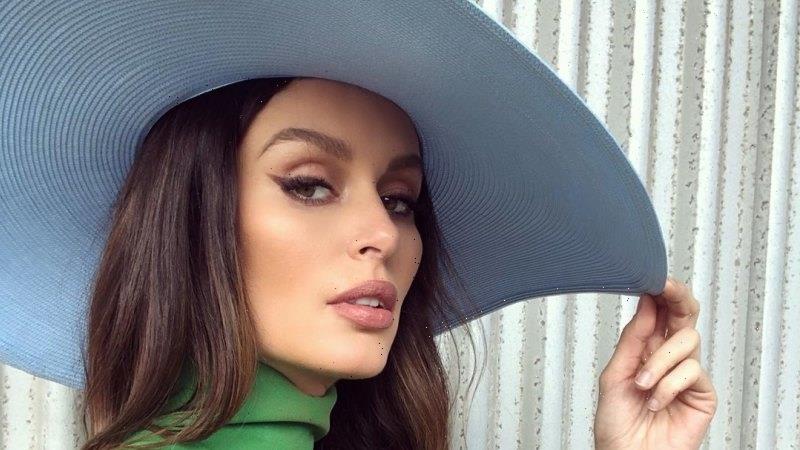 Kim Kardashian’s Marilyn Monroe “moment” at the Met Gala may have been mired in controversy, after the reality TV star wore the actress’ famous “Mr President” gown to the event, but Australian-born model Nicole Trunfio hopes for no such drama when she brings her own slice of old Hollywood to Derby Day as a guest of the Victoria Racing Club.

Trunfio, 36, says she plans to wear four outfits across Derby and Oaks Day – a trend she began on Derby Day 2016, when she wore two black Maticevski looks.

This time, Texas-based Trunfio, who was raised in Perth, is planning to wear a mix of Australian and international designers.

She will also don a vintage piece once worn by the actress Elizabeth Taylor, “and was sold for like $20,000, but it has to be tailored – it’s mind-blowing”. But that’s all she’s prepared to say about the piece, for now. 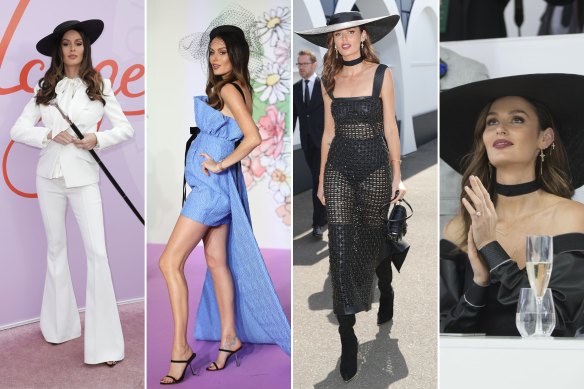 Model Nicole Trunfio made outfit changes a signature at Flemington in 2019, when she was six months’ pregnant (left, second from left), and 2016.Credit:Getty

A longtime lover of horses, which she has on the ranch she shares with her husband, American musician Gary Clark Jr, and their children, Zion, 7, Gia, 4, and Ella, 2, Trunfio recalled some of her favourite fashion moments at the Melbourne Cup Carnival.

You were discovered at 16, and catapulted onto the international stage. Now you’re a mother of three, how has your sense of style changed?

NT: As working mums we have to be really practical, and dress for comfort … I have become really consistent. I kind of have a uniform. But I have fashion in my veins and I live on a ranch, so I don’t get to exercise that enough. I have been to the world’s greatest fashion school, walking on runways and working with Tom Ford and Karl Lagerfeld and Donatella Versace … and there are two events where you can really go all out, and have fun with your fashion, and that’s your wedding day, and the races. 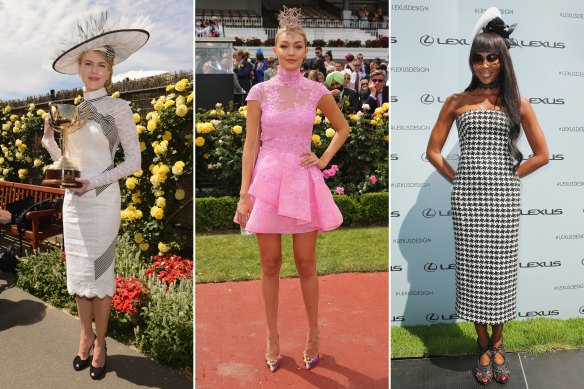 What about the Met Gala?

Oh my gosh, the Met Gala, that’s definitely a dream.

Speaking of going all out, this year’s Fashions on the Field competition has new genderless categories: best dressed and best suited. What do you think of the changes?

It’s such a monumental moment. Where we are now is an amazing and great place … of course there’s always going to be regressions … but there is a trajectory [towards inclusivity] and we are moving in that direction. I’m really hoping I see people feeling comfortable in their own skin and able to embrace themselves and show off who they are [in a fashion sense].

When it comes to dressing for the races, do you have any codes you live by?

The baseline is you have to keep it classy. For Derby Day, if you’re really unsure, just wear black. It’s about balance. When I say I am going all out, it doesn’t mean it’s a massive outfit. To me, sometimes simplicity is best. You can go back in time in fashion history and draw from that. All the advice you need is there, and then you can give it a modern approach.

Which era is the biggest influence on your style? 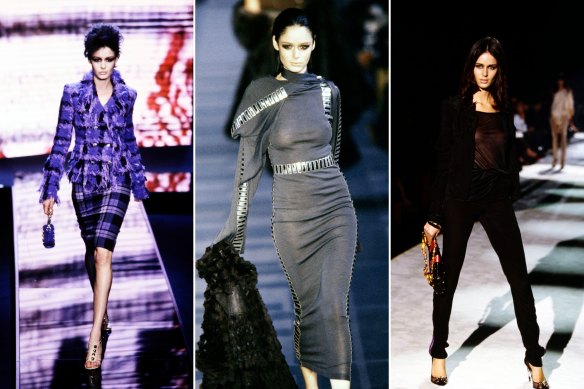 At the ready-to-wear shows we saw a lot of ’90s and ’00s-era models making comebacks. Would you consider a return to the runway?

I would do an international runway in a heartbeat. I just have a lot of priorities right now. But one day for sure.

Speaking of which, you were writing a book about motherhood. Will it be released?

It’s on our 2023 chart but I just want to make sure that it’s the right time … I want to use my discernment and integrity and make sure my message isn’t just an emotional reaction. It’s really raw – it’s not just my story, it’s a lot of women’s stories.

You have spoken before about the birth of your first child, Zion, how difficult it was.

I almost died from my first baby – I had a home birth, which was stupid, and then my sister had an emergency caesarean. It’s really traumatising, isn’t it? [But] the second [baby] feels really healing. I didn’t want to have a second one because I was really traumatised – but it healed those wounds. 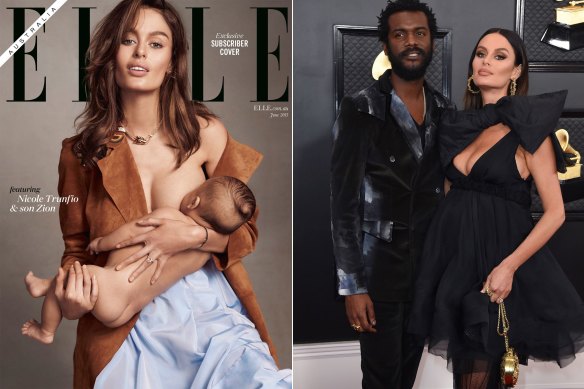 Nicole Trunfio on the cover of Elle magazine with son Zion in 2015, and with her husband, musician Gary Clark Jr.

You also have a pregnancy and postpartum clothing brand, Bumpsuit. How has it helped you connect with other women’s birth stories?

That question gives me goosebumps. There’s a lot of loss, there’s a lot of creation, manifestation, and massive learning curves. My overall goal as a human being on this planet is to empower women, and I am like this far [pinches fingers] into that journey and there’s so much more I really want to accomplish.

You’re bringing your family with you on this trip. What else will you do?

We’re going to have a family reunion. We’re hitting up Byron Bay – it’s my favourite place on the planet. I’m hoping to get my feet in the sand and some salt water, and we’re going to cook a lot and the kids can run around. Just simple.

How much do they know about their Australian heritage? Is that important to you?

They’re little now, so not enough. Coming back for this will be the beginning of a tradition. I’d love to take my family to the races and see the horses. We love horses, my kids are obsessed. I hope their Australian culture and heritage is something we’re able to embrace – because that’s a long ass flight!

10/18/2022 Fashion Comments Off on Elizabeth Taylor never made it to the Cup, but one of her outfits might
Recent Posts