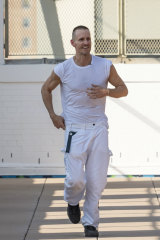 Dion Lee has been described as “Australia’s most cerebral designer” and includes actor Joel Edgerton among his growing fan base.

The acclaimed designer's spring/summer 2020 presentation featured a greater emphasis on menswear than past years, and included many deliberately unisex pieces.

"I'm playing with subverting the traditional ideas of masculinity and femininity," Lee told The Sydney Morning Herald and The Age after the show on Wednesday, local time (Thursday AEDT).

"A lot of women want to wear menswear and vice versa. The idea was to not have such a clear delineation between the sexes as you usually see with fashion." 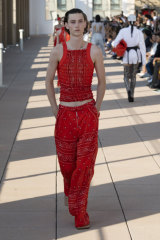 Lee's well-attended runway show was held on the rooftop of a public high school in the Lower East Side of Manhattan.

Australian actor and director Joel Edgerton, who said he was a big fan of Lee's work, was among those in the crowd.

The 33-year old designer from Sydney has been a fixture at New York Fashion Week since he made his runway debut in 2013.

Described by The Huffington Post as "Australia's most cerebral designer", the 2017 Australian Fashion Laureate is now based mostly in New York. This year's collection included several new iterations of Lee's signature fusion of underwear with outerwear.

One piece on Wednesday's runway, for example, combined a pinstripe blazer and shorts with a lingerie corset and sandals.

The show was a study of contrasts: suspenders and knee-high boots one moment, billowing parachute pants the next. 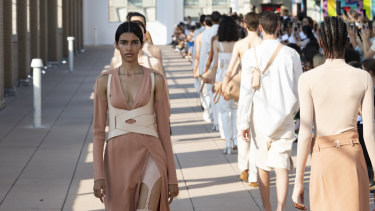 Dion Lee’s New York Fashion Week show was held on the roof of a school on Manhattan’s trendy Lower East Side.

There were many black and white items but also pieces in striking red, salmon pink, beige and olive green. Paisley patterns featured prominently with less sheer lace than in Lee's past collections.

Lee's show was the second and final runway presentation by Australian designers at this year's fashion week.

Sydney sisters Nicky and Simone Zimmermann premiered their latest collection at a runway show earlier in the week.