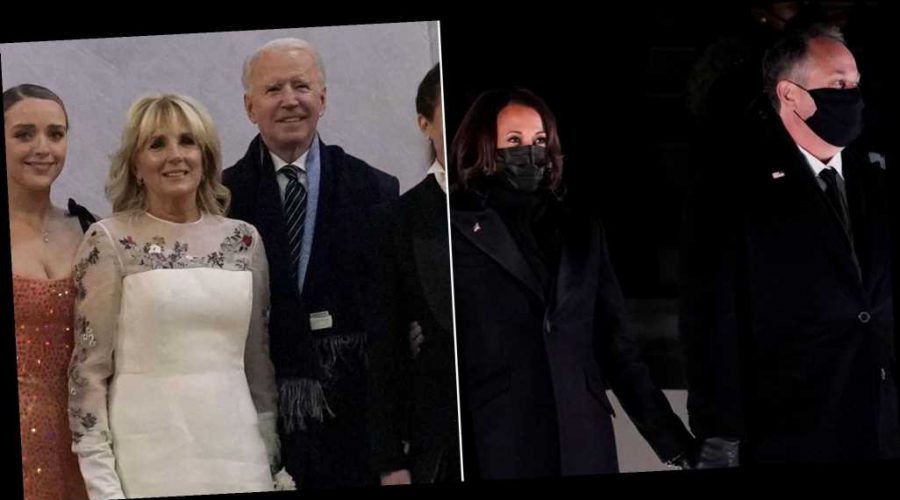 Wardrobe change! Kamala Harris and Dr. Jill Biden both changed out of their statement-making day looks into stunning evening wear for the 2021 presidential inauguration. But there was just as much meaning behind their night ensembles.

On Wednesday, January 20, Joe Biden was sworn in as the 46th President of the United States and Harris became the first Black, first female and first South Asian American to be Vice President of the United States. For the ceremony, Harris stunned in a purple coat and dress from Christopher John Rogers. But for the concert that took place later that night, the former California senator opted for a sleek black number by Sergio Hudson.

Underneath a floor-length silk tuxedo overcoat she donned a sequin cocktail dress, topping off the stunning ensemble with Irene Neuwirth earrings. “We kept the silhouette very structured and tailored, because that’s who the Vice President is,” Hudson told Harper’s Bazaar. “But the liquid sequins give her glamour and shine, because her influence and the way she’s broken barriers is a light for so many of us. She shines so we can all shine.”

Both designers Harris wore on inauguration day were young, Black American talents, with Hudson from South Carolina and Rodgers growing up in Baton Rouge, Louisiana. Both designers have dressed other notable woman including Michelle Obama, who turned heads at the inauguration in a plum-hued ensemble from Hudson. “People are looking for a moment of beauty and hope right now,” Hudson told Harper’s Bazaar of the buzz about Obama’s inauguration outfit. “and, well, I guess we gave it to them!”

Meanwhile, the first lady of the United States changed out of her custom-made blue Markarian dress and overcoat into an ivory Gabriela Hearst look complete with a double-breasted cashmere coat, a coordinating silk wool dress and matching leather gloves. The frock featured beautifully embroidered details “reflecting all of the state flowers of the United States and territories and the District of Columbia,” according to New York Times fashion director Vanessa Friedman.

This was the second young designer American designer Dr. Biden chose for inauguration day. Markarian designer Alexandra O’Neill noted this, telling WWD, “She chose an emerging designer for this big day so I know she’s looking to support new talent. That is very special and exciting.”

As for the blue hue she wore during the day, a press release from Markarian stated that it was, “to signify trust, confidence and stability.”

Listen on Spotify to Get Tressed With Us to get the details of every hair love affair in Hollywood, from the hits and misses on the red carpet to your favorite celebrities’ street style ‘dos (and don’ts!)