“An Accelerated Culture,” the exhibition that opened last week at the New York gallery Friedman Benda, was conceived, according to Marc Benda, the gallery’s founding partner, as the “first critical look” at a group of noted designers from Generation X.

Indeed, the show’s title is taken from Douglas Coupland’s 1991 novel, “Generation X: Tales for An Accelerated Culture.” But unlike Mr. Coupland’s characters, who face fewer opportunities than the baby boomers before them, these designers operate on their own terms, weaving craft, narrative and technology into a successful whole. Among the group are Michael Anastassiades, Tord Boontje, Ronan and Erwan Bouroullec, Paul Cocksedge, Matali Crasset, Martino Gamper, Konstantin Grcic, Joris Laarman, Max Lamb, Bertjan Pot, Raw Edges (the partnership of Shay Alkalay and Yael Mer) and Wieki Somers.

Libby Sellers — the curator who organized the exhibition with her fellow Gen X-er Brent Dzekciorius, who founded the architectural materials company Dzek — wrote in the exhibition’s overview: These designers, who entered the field in the late 1990s and early 2000s, “questioned everything, the design industry included,” and “developed independent, multidimensional and entrepreneurial methods to forge their own futures.”

They were certainly not the first designers to interrogate the status quo: Among their role models were the Memphis collective, founded by Ettore Sottsass, and the Dutch studio Droog. 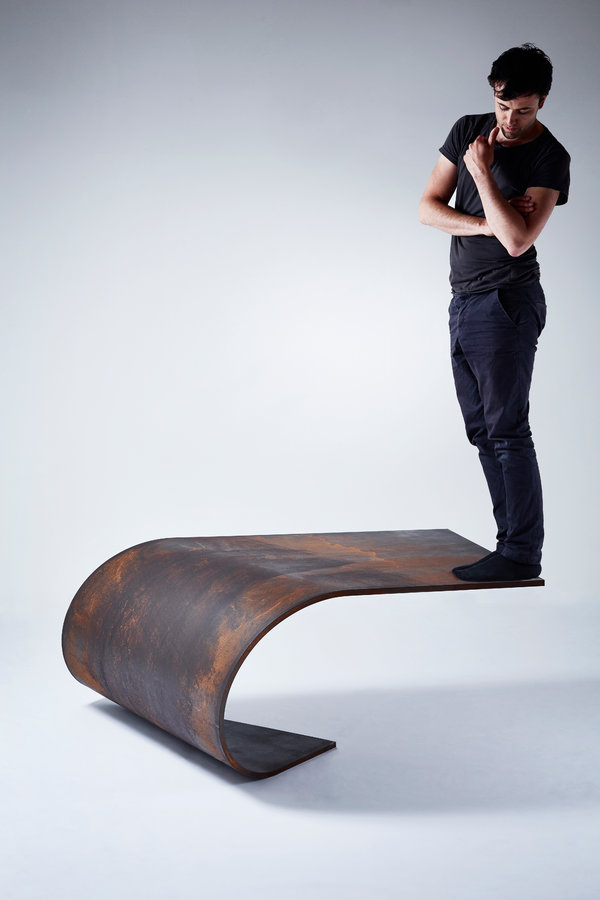 Many of the designers are associated with one of two influential schools: Design Academy Eindhoven in the Netherlands or the Royal College of Art in London. Joris Laarman, for example, studied at Eindhoven under Gijs Bakker, one of Droog’s founders; Mr. Laarman’s Heatwave radiator, a stunningly Baroque transformation of a little-loved object, is as arresting as his digitally designed, cast aluminum Bone Chair. Tord Boontje, another Eindhoven alumnus who later attended and taught at the Royal College, is known for his decorative evocations of nature — often digitally rendered — like the show’s table with floral-patterned perforations in its stainless steel top. Martino Gamper, Max Lamb and Paul Cocksedge all studied at the Royal College under Ron Arad, a star of the previous generation. Mr. Lamb is represented at the exhibition by a bench made from a plaster cast of an architectural detail; and Mr. Cocksedge by a hanging globe light made of Styrofoam coffee cups and by his curved, rolled-steel Poised table, which balances improbably on one corner.

Conversations with these designers reveal a healthy skepticism. Michael Anastassiades, whose poetically minimalist lighting has propelled him to fame, said that for him, “only one model existed — it was important to be critical and establish the right distance.” Ronan Bouroullec, in spite of his and his brother Erwan’s success, is still “full of doubt” about the future of design. Bertjan Pot, the Dutch designer who achieved early commercial success with products like his Random light, made by wrapping resin-impregnated yarn around a large balloon, realized that his most successful designs were those he initiated, so when companies come calling, “I start with what I’m working on.” The exhibition showcases a recent series of masks and gloves that he has made — by himself, on a sewing machine — out of synthetic rope and yarn. Wieki Somers, who co-founded her eponymous studio with Dylan van den Berg, and whose work in the show is a group of coated aluminum casts of ad hoc, homemade stools and chairs she found in China, wants to “reawaken hidden qualities in ordinary objects, and invite people to look with fresh eyes at everyday reality.”

Ms. Sellers, Mr. Dzekciorius and Mr. Benda all noted that the start of these designers’ careers coincided with the rise of design galleries, which helped launch more than a few of them, and which provide a valuable incubator for their experimental work. And since this is a gallery exhibition, only scarce or limited-edition pieces are on display. But one of the hallmarks of this generation of designers is that they move fluidly between limited-edition work for galleries, and objects designed — with just as much innovative thinking — for production by companies like Vitra, Flos, Magis or Hay.

So it would be illuminating to see an exhibition that reflected this polyvalence. Then we might, for example, see what are arguably Mr. Boontje’s two most influential designs: his Blossom chandelier for Swarovski, a sparkling spray of branches laden with rosy crystals; and the more affordable Garland light, a swath of photo-etched metal leaves and flowers that wrap around a hanging light bulb, casting fairy-tale shadows. Both were notable for giving minimalism-weary design aficionados permission to love pattern, petals and sparkle (and pink). As Murray Moss, of the late, lamented design store that bore his name, pointed out: As a result of technological innovation, “industry can do things so much better that it’s dissolving the distinction.”

On the other hand, the speed of technological change may create an ambiguous future for the next generation. Ms. Somers said that younger designers “tend to reinvent the discipline. Same questions, new answers.” But Mr. Pot wonders if design’s importance will diminish, “because it’s not designers who are changing the world; maybe it’s scientists.” It could be, as Ms. Sellers writes in the overview, that “perhaps the designers of Generation X will be the last to have had a foot in each camp,” as “makers, storytellers and cultural commentators.”

05/07/2019 Fashion Comments Off on Design Became a Behemoth. Those Behind Its Rise Are Wary for the Future.
Recent Posts
We and our partners use cookies on this site to improve our service, perform analytics, personalize advertising, measure advertising performance, and remember website preferences.Ok