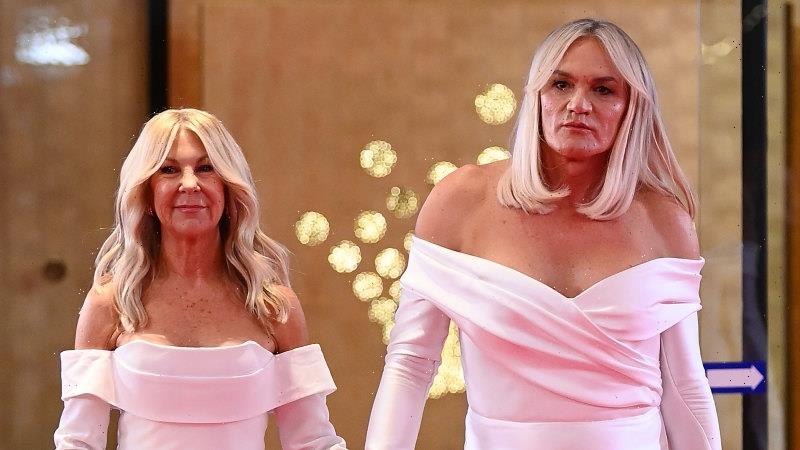 If red carpets are no longer just about dresses but about “moments”, then Sunday night’s Brownlow delivered in spades.

Saving their entrance until the very end, former North Melbourne coach Danielle Laidley and her partner, Donna Leckie, delivered the drama in what was an otherwise uneventful return to the red carpet after the Brownlow’s pandemic pause. 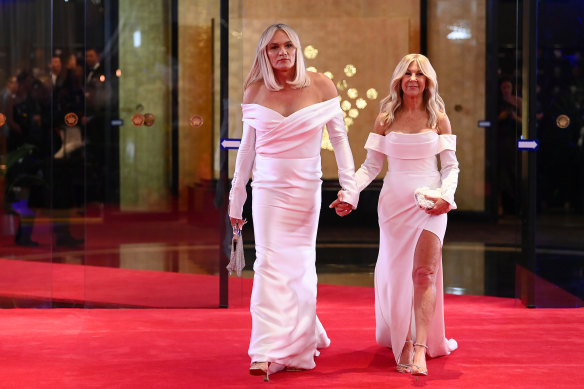 Belles of the Brownlow … Dani Laidley (left) and Donna Leckie.Credit:Getty

Arriving in matching white Marquise Bridal gowns, the couple held hands and were visibly elated – and a bit nervous – to be in the spotlight on football’s biggest night of the year.

“It’s a whole range of emotions,” said Laidley, who has become an outspoken advocate for transgender rights and an ambassador for the “rainbow community” in the broader AFL community.

Asked what the Brownlow meant in the context of the story of their relationship, Leckie said: “I don’t know how to answer that because every time I talk I start to cry, and I don’t think the girls would be happy if I had my make-up running … I love the fact Danielle is a huge part of this community and how they have welcomed her.”

Laidley added: “Our overwhelming feeling is you can’t be what you can’t see, and I’m so grateful that I have been accepted for who I am and hopefully that will lead to everyone, whether they’re transgender [or] the rainbow community … we are people, we want to be loved and we want to belong.”

Stylist Lana Wilkinson, who worked with the women, said it had filled her cup to be involved in such a crucial moment for the couple. “They’ve never really had a ‘glam team’ and been made to feel so special so, for me, to be able to play a small part in that has been an absolute joy.”

Wilkinson, who also has her own range of shoes, said she was relieved Laidley had fit into one of her styles – a fitting Cinderella moment.

However, aside from the “two DLs” – Laidley and Leckie – there was a distinct lack of high drama on the red carpet. 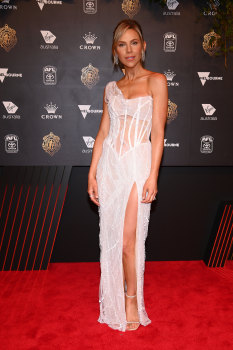 There was also a distinct reminder that while COVID forced the relocation and near-cancellation of the Brownlow for two years, its presence was still felt in the form of a red carpet “bubble” for flag favourites Geelong (most Sydney players and officials were at their own function at the Sydney Cricket Ground).

First to arrive were Geelong skipper Joel Selwood and wife Brit, who raced through the red carpet faster than Winx, in line with the COVID protocols.

No stopping. No chatting. And definitely no kissing (us, that is, not each other). The Selwoods announced their pregnancy last week, after a fertility struggle, but we couldn’t ask them about that.

Nor could we ask Emma Hawkins about how it felt to be at the Brownlow, with her husband Tom heading to the grand final and with a nine-week-old baby upstairs, though her Instagram post summed it up quite nicely. “Very happy to be my husband’s plus one tonight … I’ll do anything to get out of bath time,” she wrote earlier in the day, later posing for a photo with the couple’s three children.

But we could speak to Scott and Alex Pendlebury, fresh from the Magpies’ crushing loss to Sydney by the smallest of margins on Saturday night. The couple were putting on a brave show but it was clear it hadn’t been the most enjoyable 24 hours of their lives. “Hopeful then shattered” was how Alex, wearing a white Oglia-Loro column dress with sheer panelling, described the final seconds of the match.

In some ways, Pendlebury’s emotions summed up how many might be left feeling after the first Brownlow back after COVID. Ah, there’s always next year.