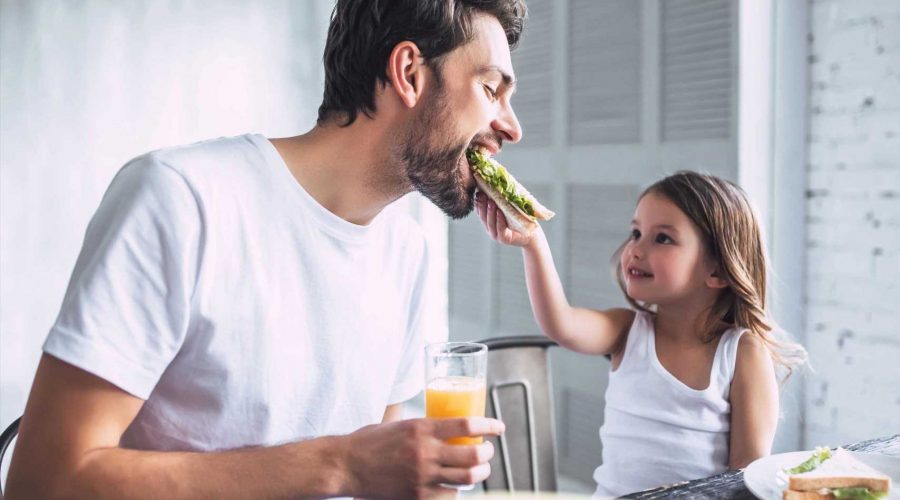 A DAD admitted he charged his ex to "babysit" his own child – and people are very torn on the issue.

Posting on Reddit, the bloke explained how he shares custody of his five-year-old daughter and split from her mum three years ago. 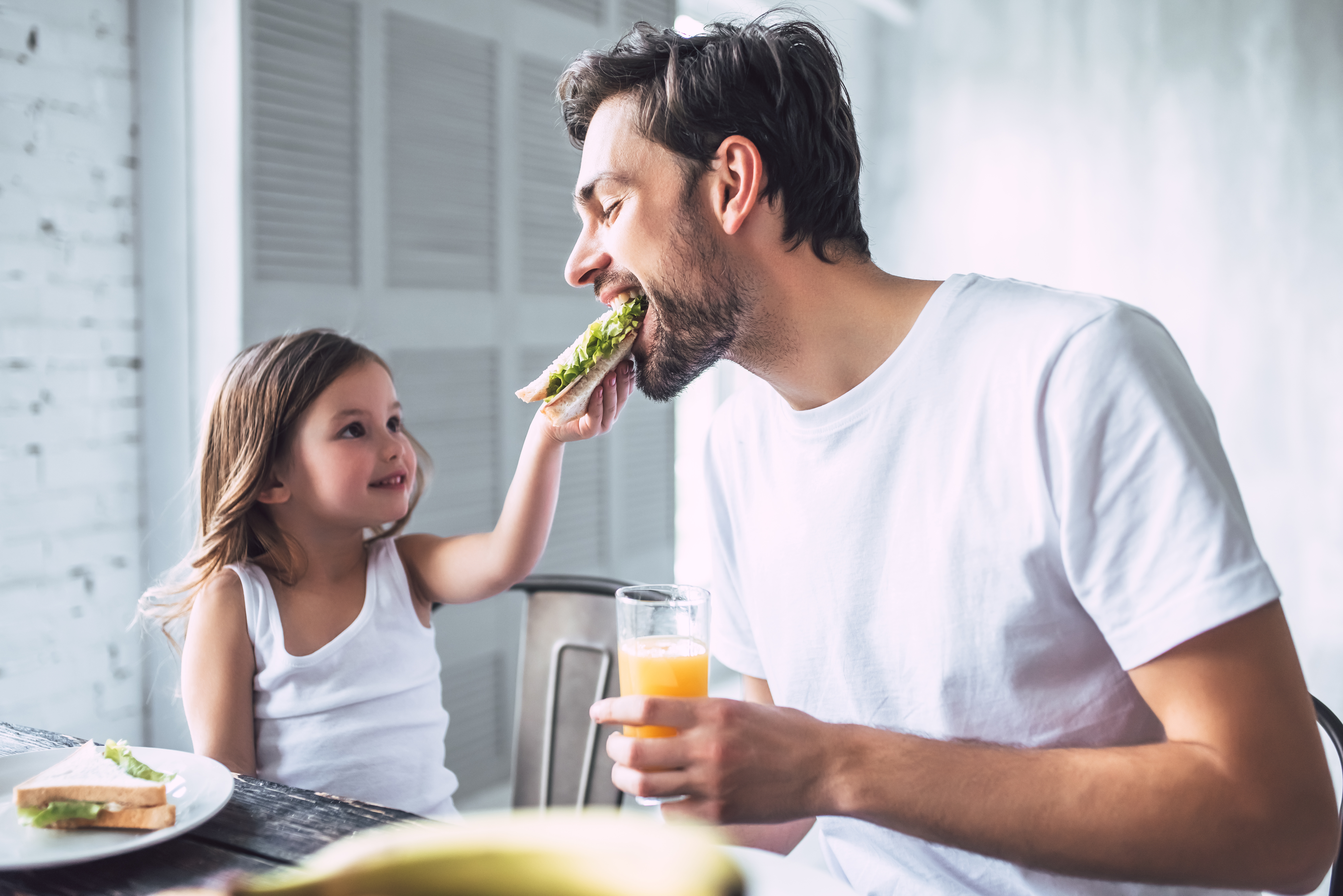 Two weeks ago, the dad was fuming when his ex rang him at 7am – telling him he needed to pick up their daughter because "her normal childcare (her Mom) and her backup (her Sister) are not available".

He explained: "I'm like WTF I have to go to work soon as well what happened?

"Apparently her grandfather fell the night before and had to go to the hospital so her Mom went to see him, and since she doesn't drive her Sister also had to go.

"This is the 3rd time this has happened in the past year. We talked about this the last 2 times and I clearly explained to her she needs to figure this out.

"I can't just bail on work to get (our daughter) for her on days when she's supposed to be taking care of her." 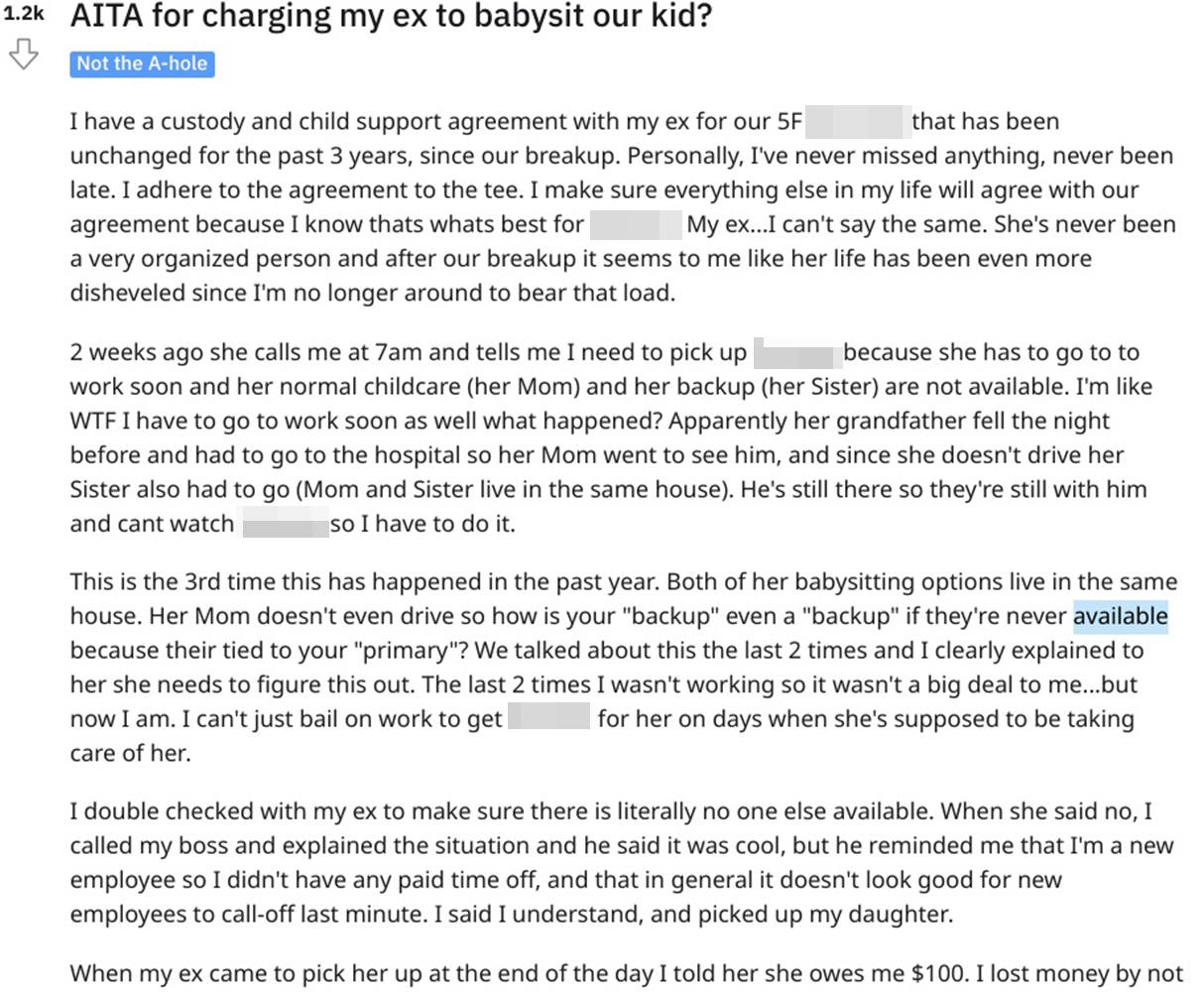 The dad asked his ex if there was anyone else available who could look after their girl, then called his boss and explained the situation.

He added: "He said it was cool, but he reminded me that I'm a new employee so I didn't have any paid time off, and that in general it doesn't look good for new employees to call-off last minute.

"I understand it was an emergency, but this is your fault for not having proper backup.

"Our agreement says I pay you child support to cover partial childcare costs when (our daughter) is with you, but then I turn around and provide the childcare.

"I can't both not work and still pay…its literally impossible. She BLEW UP on me. She started screaming and said she's not going to pay me to watch my own daughter.

"She called me a piece of s**t for trying to capitalize on her family emergency. She called her Mom on the phone so she can yell at me too. I stood my ground and collected my $100.

"AITA (am I the a**hole) here? Its not even about the money it was about sending the message that she's not being a responsible parent and she needs to face harsher penalties due to her lack of preparation. Grandpa is now fine, BTW (by the way)."

You're a parent, you aren't a babysitter. Her needing you to take the kid three times in a year when she's the custodial parent isn't that much

And people were very torn on the issue. One person, supporting the dad, said: "You made an excellent point. Next time just tell her no. She will have to be the one to miss work.

"If the situation was reversed I can promise you she would not have handled as well as you did, putting your child first. Plus you have a new job."

While a second agreed: "Her work is not more important than yours."

And a third wrote: "She needs backup care to properly provide the level of childcare you’re already assisting in paying for.

"Stuff happens, but when the same stuff repeatedly happens, she needs to figure out a new system that doesn’t jeopardize your job."

But others disagreed with the dad's stance, writing: "Grandpa was in the hospital, child care fell through, that happens.

"Even if you were happily married, childcare still can fall through (especially when you’re not using a daycare and relying on family). And you still would’ve taken a day off to care for your child.

"Having a child doesn’t always perfectly align with the court order. Sometimes you have to go above and beyond.

"I’m going to guess mom has primary custody and does the bulk of the day to day work in raising he child. Taking a day off to help in a family emergency isn’t like a crazy situation."

While a second said: "YTA (you're the a**hole) for trying to charge her to take care of your own daughter.

"I mean it's YOUR child, if it's the first time you miss work for it, it's not like you're going to lose a whole lot of money anyway, she had an emergency, it can't be planned."

A third slated: "You make it sound like a burden to help parent your kid, even if there's an emergency.

"How much do you actually help out without being court ordered? It sounds like you're doing the bare minimum required and just waiting out the 18yr obligation."

And another person wrote: "First off, you're a parent, you aren't a babysitter.

"Second, if you were going to charge her, you needed to provide that info up front.

"Thirdly, her needing you to take the kid three times in a year when she's the custodial parent isn't that much.

"Is she even aware you have a job you needed to call out from? Why don't you have a babysitter to call if you need one?"