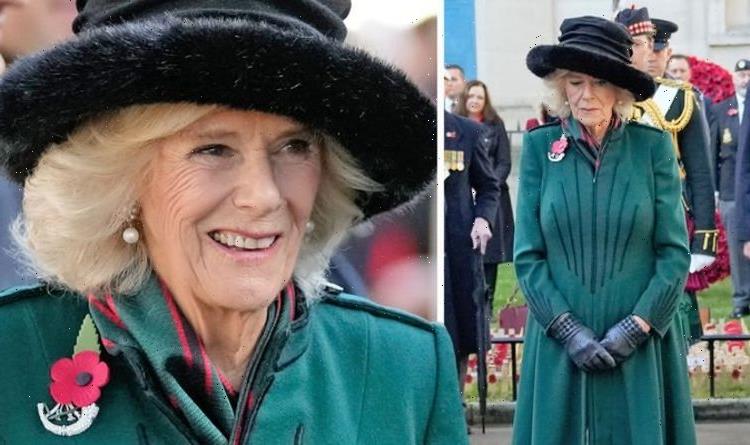 Camilla Parker Bowles was seen without Prince Charles today as she attended an engagement for Remembrance Day. The Duchess of Cornwall joined the Dean of Westminster to lay a Cross of Remembrance at Westminster Abbey in light of Armistice Day. The royal was photographed wearing dark green and a sparkly brooch as she made the solo appearance.

In her trademark cut, Camilla opted for a dark green coat which was cinched in at the waist and had an A-line hem which sat below her knees.

On her head, the Duchess had chosen a black had with a thick fluffy rim.

To complete the look, the royal added a small scarf in the colours green and red and tucked it into the collar of her coat.

Alongside a poppy, Camilla had chosen a brooch suitable for the occasion.

According to Clarence House, the silver Bugle Horn is used as the cap badge of The Rifles and is worn by every Rifleman today.

Considered to be the ideal replacement for the drum, the bugle horn was adopted by Light Infantry and later Rifle Regiments from the early 1800s to pass orders across the battlefield.

The silver brooch was commissioned by The Rifles and was previously presented to Camilla by General Sir Patrick Sanders, Colonel Commandant of The Rifles.

On her ears were diamond studs with a large pearl drop and she kept her makeup neutral.

The Duchess of Cornwall’s been Patron of The Poppy Factory since 2013.

The Poppy Factory makes poppies for The Royal British Legion and the Royal Family since 1922.

The Poppy Factory supports veterans with mental or physical health conditions back into work throughout the UK.

Over 1,300 wounded, injured, and sick veteran have been supported back into meaningful employment in their communities by the charity since 2010.

Yesterday, Camilla visited the factory to add the finishing touches to The Prince of Wales’ Cenotaph wreath and her own Remembrance cross.

The Remembrance Sunday ceremony at the Cenotaph is attended by politicians and members of the Royal Family, as well as the Queen every year.

However, with the monarch having cancelled several engagements on doctor’s orders recently, her attendance remains uncertain.

Buckingham Palace released a statement earlier this month stating it was the Queen’s “firm intention” to attend the Remembrance Sunday service this year.

But the Queen will be missing the Festival of Remembrance on Saturday, following advice from doctors last month that the monarch should rest.

If the Queen does miss this year’s Remembrance Sunday, it will be only the seventh time in her near seven-decade long reign that the Queen has missed the event.