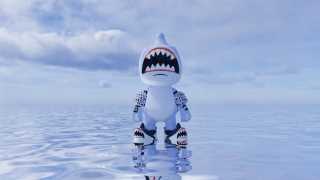 LONDON — Burberry wants to lead the way in digital ownership and gaming.

After experimenting with its own games, the British label is now looking to go a step further, releasing its first NFT vinyl toy and digital clothing on Blanko’s Block Party, an open-world, multiplayer game where players can collect, upgrade and sell digital toys.

The launch is part of a tie-in with Mythical Games, the company behind Blanko’s Block Party, announced last June at the Electronic Entertainment Expo in Los Angeles.

Burberry’s version of a Blanko, or digital toy, was inspired by the brand’s Animal Kingdom house code — which has been translated into everything from deer prints to Bella Hadid posing as a panther, in the past. This time, the label’s team went for a shark, creating a digitized vinyl toy called Sharky B, who is dressed head-to-toe in clothing and accessories featuring the Burberry ‘TB’ monogram.

Sharky B’s outfit, including a jetpack, “TB” armbands and pool slides, will be on sale, too — marking the first time Burberry has released digital-only products. Players will be able to purchase them and use them to dress up any virtual toy they own.

“This feels very community-led, the platform is home to a lot of artists and other creatives, so it taps into everything we’re excited about in gaming,” said Rachel Waller, global vice president of channel innovation, in an interview.

Waller added that the project was an opportunity for teams across the company to get together, including members of the core design team: “You’re leveraging the same teams across physical and digital products,” she explained. “The opportunity for digital product is very exciting, and as our physical and digital selves continue to blur, the momentum around that conversation builds up. We’ve also seen it with games like Drest.”

The brand has been experimenting with online gaming for a while now, starting with China and expanding further into Asia, the U.K., the U.S. and Canada, with B Bounce, its own game where players get to control a Burberry-clad cartoon character and win custom GIFs and virtual Burberry puffers.

Last summer, it opened a social shopping store in Shenzhen together with Tencent. Shoppers were asked to set their WeChat accounts into action as they gamed their way around the store, making virtual — and real-life — discoveries.

Waller said those earlier experiments gave the team a confidence boost to get more creative, as feedback has also proven that gaming is a strong area of interest among the brand’s core consumer. “We do a lot of creative marketing with our physical retail, those crazy articulations of the brand across hot air balloons or sail boats — yet digital allows us to go even further. The lesson is that this is a space where we can be really experimental and build freedom. It gives the teams confidence and license.”

The focus will now be on understanding how products translate differently in the physical world and the digital meta-verse, and ensuring that the Burberry aesthetic and values remain intact in this new virtual realm.

“In the last year, we saw people engage in digital products, whether that was NFTs or digital art, in places and scales you wouldn’t have anticipated two years ago. Momentum is absolutely there and there’s a tremendous opportunity around how you can now express yourself with brands and share values. It’s just about making sure that however we articulate it and come to life in these spaces, we do it authentically to our brand and consumers,” Waller added.