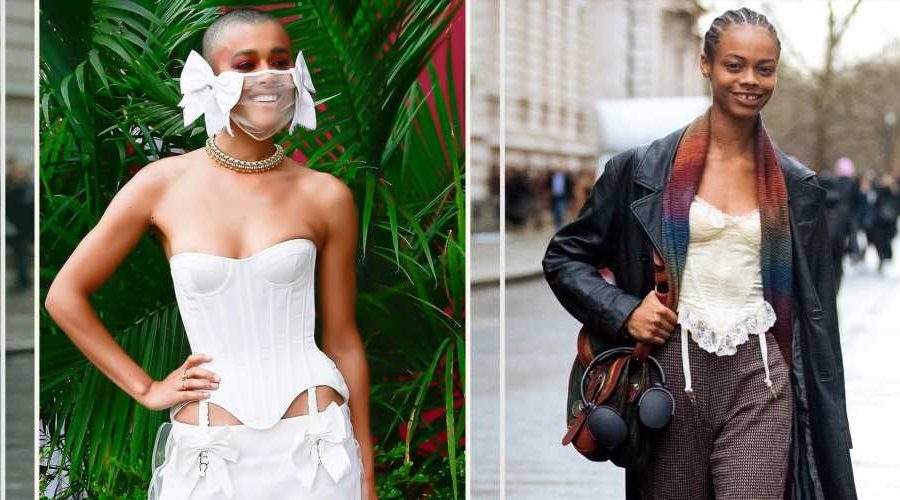 Sure, corsets have been around for a bit (as in, hundreds of years at this point), but in 2021, they've been majorly revamped and revived. It's as if everywhere we turn — or scroll — someone has one on, and if they're not layering them over puff-sleeved dresses in that whimsical, Cottagecore or Fairycore kind of way, they're using one to channel channeling a 2000s pop star, making this piece seem extra sexy and lingerie-like.

It's the latter that has lead us to a whole new phase in the corset trend, which we've begun calling "butterfly tails" because of its appearance (something shapely and gorgeous with straight-up strings flying out the bottom). In short, this new group of corset tops include garter straps that freely hang down over the bottom half of your outfit, as if you simply forgot to fasten them to your thigh-high tights (how very Cabaret of you). It's sexy, fun, and completely effortless, and once you have your corset top on, this is the no-fuss detail that makes that extra statement.

Even better, butterfly tails are already beloved by up-and-coming fashion icons like Jordan Alexander, who plays Julien Calloway in HBO Max's Gossip Girl. Her Wiederhoeft outfit from show's premiere featured garter straps with bow details, which matched her mask and gave her outfit a playful touch. This exact trend was also seen on the Fall 2021 runways. At Christian Siriano, a lace corset, which was layered over a structured top and paired with black trousers, featured chains right where the garter straps would be. It was fancier version of butterfly tails, but butterfly tails nonetheless. At Gucci's Aria show, a more equestrian version popped up, which included the fashion house's famous horsebit detail put to a more functional (if slightly steampunk) use. It's true this trend has been bubbling up for a while now, right under our very noses, if not under out very own torsos. It originally made an appearance pre-pandemic in early 2020, but as everyone stayed indoors, it didn't get the chance to truly shine. Now, we're finally finding reasons to get dressed up again, so it's on the rise once more. And with Summer being the perfect season for sexier fashion choices, the look fits right in, working as an alternative to twisted halter tops and cutouts.

Butterfly tails also work with almost every type of bottom, from skirts to jeans, and once things cool off again, they can be layered under blazers and trench coats. You can also style a corset the same way you would a vest, layering it over a dress and simply letting the straps flap in the breeze like you're a Longtailed Skipper, the southern butterfly whose eye-catching tail may have inspired the name for this trend. Plus, don't be surprised if you see butterfly tails evolving. Bella Hadid recently wore a $60 I AM GIA top with a "fluid hem," which definitely had the same effortlessly sexy effect. Right now, you can scoop up corset tops with butterfly tails from both designer brands and fast fashion stores. Dion Lee sells one for $490, while Shein's is just $19. There's also Meshki's $29 version, which is more of a T-shirt than a corset, Pretty Little Thing's $48 ruched corset with butterfly tail side-ties, and Charlotte Knowles's $380 bustier design, which is extra sexy with cleavage cutouts. One thing you can count on? It's gonna look fly.

07/13/2021 Fashion Comments Off on Bring On Butterfly Tails, the Laziest Sexy Trend of the Year
Recent Posts