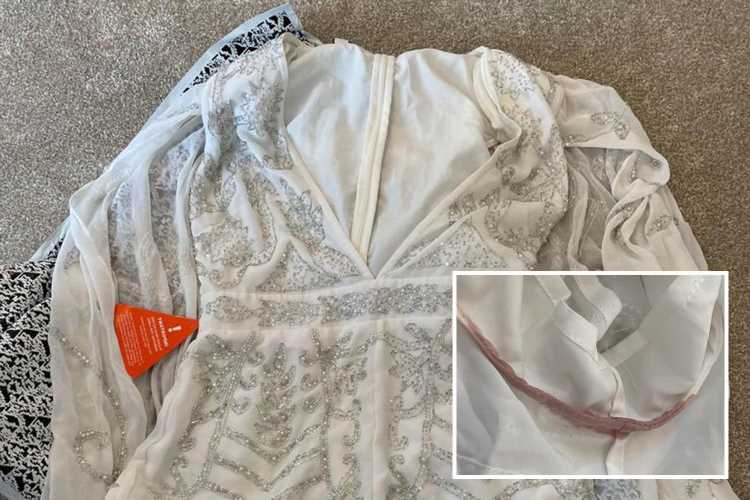 A BRIDE-to-be was left traumatised when the £125 ASOS playsuit she ordered for her hen do arrived covered in a “disgusting bloodstain.

The 26-year-old woman, who wishes to remain anonymous, was left in disbelief when she spotted what is believed to be menstrual blood on the crotch of an embellished white playsuit. 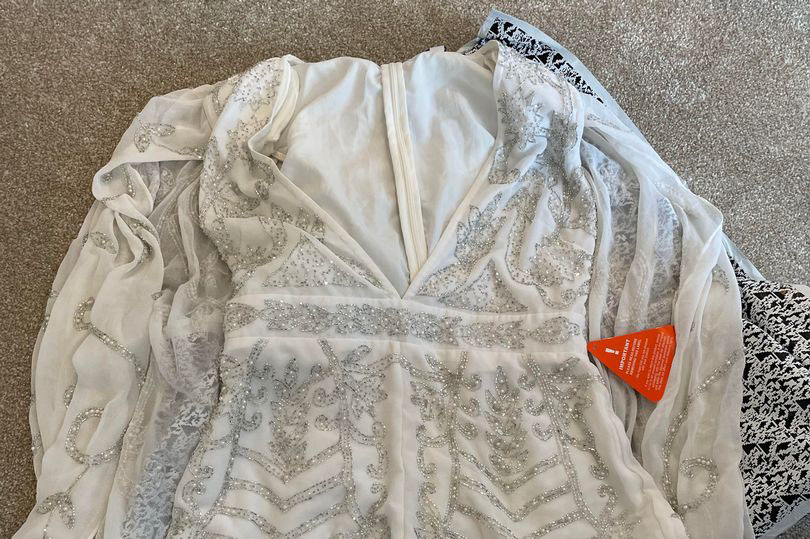 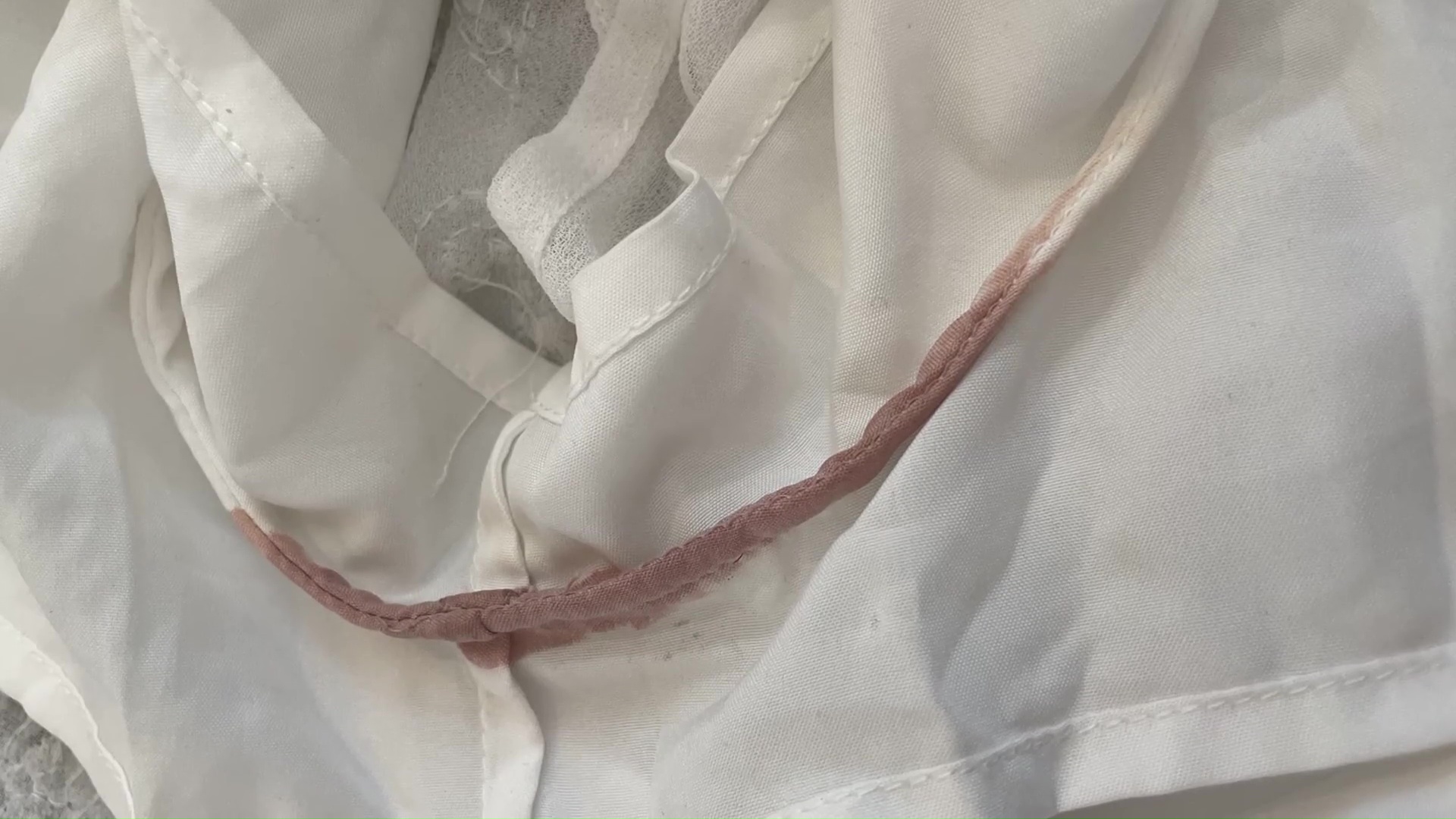 The online shopping giant has now apologised 'unreservedly' to the customer, with a spokesperson saying the firm was 'appalled'.

The discovery was made when the woman was excitedly trying on a number of different outfits from her latest ASOS order in front of her mum – planning what to wear for her long-weekend hen do with 25 friends in the Lake District.

But as she was explaining the design of this particular garment, she was left screaming in shock, dropping it to the floor.

“I was holding the playsuit up against me, and it was quite short, so my mum said, ‘I hope that’s a top, not a dress,’” the woman explained to the Manchester Evening News.

“I said, ‘no, it’s a playsuit’, and lifted up the crotch to show her, and then both of us just gasped.

“I was screaming. And just let go of it in shock. It was disgusting.”

The woman, who works in marketing but previously worked in retail, had only just finished renovating her living room and had fitted a brand new carpet.

Whilst the stain was dry, she was mortified at the thought of the garment touching her week-old carpet.

“It didn’t make a mark but it didn’t stop me going in with the Zoflora and Dettol spray,” she said.

“I’d just finished renovating my living room, I was traumatised. And it’s not just a smudge on the fabric, it’s like someone has bled all over it.

The item of clothing – a Frock and Frill Bridal Embellished Playsuit – cost £125 and was delivered to the Merseyside home on August 27.

The woman, who is to marry her fiancé in June 2022, says the material felt of good quality, was quite heavy in weight due to the beading, and that she “treated” herself to the pricey piece for the special occasion.

Following the discovery of the stain, she didn’t just want a refund, and wished to raise it as an important issue, so got in touch with ASOS via social media, but says she was ignored.

She then realised there was a live chat function in the ASOS app, where she had success in getting through.

An apology email was then sent on September 2 by a customer care staff member, but when she responded with more detail, as requested, she says she was ignored again, and that her emails started to bounce.

The woman then got in touch with the Manchester Evening News, and after they approached the online fashion retailer this week, she was given a full refund and a £50 voucher to compensate.

Apologising again, ASOS told the customer the lack of response was due to a 'technical error'.

“I didn’t just want a refund, I wanted to make sure it was taken seriously by them and investigated; it’s an actual health and safety issue.

“Blood-borne diseases aren’t something to be taken lightly, and you’d think after the year we’ve had, people would be more conscious about hygiene.”

She added: “Ideally I wanted them to pay for my carpet to be cleaned, but they ignored that request and sent me the voucher.”

She says ASOS said she can return it if she'd like, but they are yet to provide a postage label.

“It feels so weird to have this stained dress of someone else’s blood in my house,” the woman said, who fears if she does return it, it could be wrongly sent out again.

“I don’t know how I’m supposed to return it, and if I do send it back, it’ll go to a warehouse and some poor person is going to end up touching it.”

The shopper, who says she loves ASOS clothing and their premier delivery too much to stop shopping there, is now more wary of what she purchases online.

She says she believes returns should be opened under a blue light by staff in order to check for bodily fluids.

Which money-saving deals are are available near where you live? Find out by adding your postcode.

“This is on white fabric, so it’s made me think about all the blackjeans, leggings, knickers that I’ve bought off ASOS, and now I’m grossed out thinking about what bodily fluids could have been all over those things,” she said.

“I haven’t shopped at ASOS since but I’m obsessed, so I know I will. But I probably wouldn’t buy jeans, or a playsuit, or bodysuit again.

“Thinking about it makes my skin crawl.”

When the M.E.N approached ASOS, a spokesperson said they have ‘robust' processes in place for returns and that they were ‘appalled' to hear about the customer’s experience.

An ASOS spokesperson said: “We want all our customers to have a positive experience when shopping with us so were appalled to hear that this wasn’t the case for (this customer).

“We have robust processes in place to ensure that returned items are up to standard ahead of resale, however on this occasion, it is clear that that this item fell far short of the standard we would expect to deliver.

“We have apologised unreservedly to (the customer) and have raised this incident as a matter of urgency to the teams involved.”

Brand Frock and Frill, which sell their range on ASOS, has been approached for a comment.