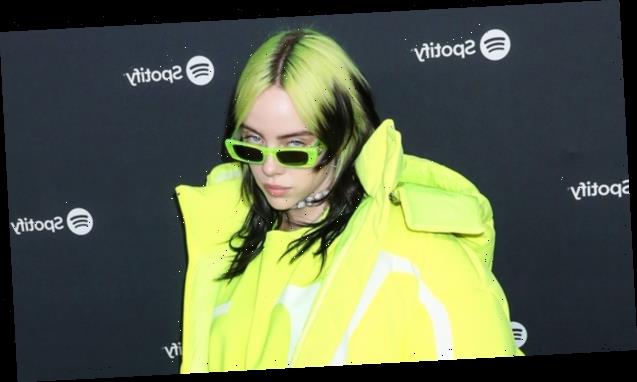 Billie Eilish is a vision in neon green in a slew of new photos she shared to Instagram on January 27! The singer coordinated her full look — from her square sunnies, down to her platform moon boots!

It’s no secret that Billie Eilish loves to wear neon — duh! The Grammy-winning singer, 19, did just that in a mini photoshoot she shared to Instagram on Wednesday night — proving she’s sticking to her signature (baggy, neon) fashion in 2021. The “Bad Guy” singer rocked an oversized bright green hoodie by Bloody Osiris, a popular streetwear brand, in which she tagged in her post.

Billie paired the oversized sweatshirt with matching pants that had two convenient pockets just above both knees. She posed outside in a grassy area while wearing mid-calf, green moon boots. Her thick-framed sunglasses poked through her poker straight green and black hair, which looked freshly dyed on top. Billie, who barely showed her face in the four snaps, simply captioned her post with three green snake emojis.

Fans in the comments went wild over the singer’s neon-themed post. One fan even declared, “Billie Eilish invented green.” While the latter is untrue, she’s certainly boosting the popularity of neon threads. More fans praised Billie for her “epic drip” and “great fits” in the comments, while others begged her to drop new music. 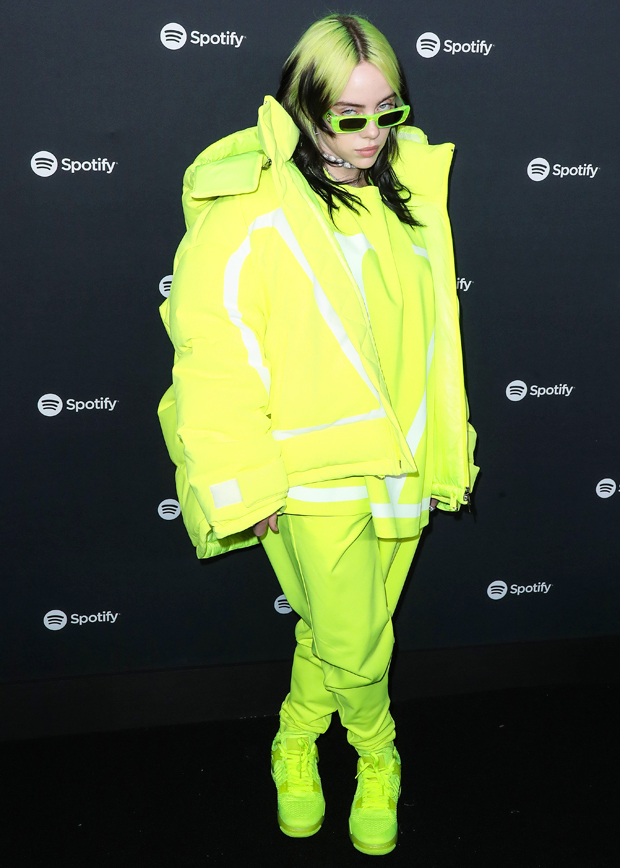 Billie, who’s nearing the February 2021 release of her Apply TV+ documentary, Billie Eilish: The World’s A Little Blurry, recently updated her fans on the new album she’s currently working on. In a series of since-expired Instagram Story posts, she hilariously warned fans to stop making fun of her hair, or else she won’t release the new record.

“I have a fun story to tell you, but first: f—k you guys. Stop making fun of me,” Billie said at the time. “My god. I’m f—king making you an album. I will not put it out if you keep making fun of my hair. Shut up!”

As for what sparked Billie’s hair discussion? — The “Everything I Wanted” crooner took notice to chatter on social media about her “mullet” haircut, and felt the need to respond. A few days later, Billie returned to Instagram Stories to share the origin story behind her famous top layer of shorter green hair. When a fan asked her to share a photo of “The most f–ked your hair’s been,” Billie provided photo and video evidence of a past dye-job gone wrong, which led to her “mullet” hairdo’.

The video showed Billie standing in a bathroom mirror while she pulled short strands of hair from the top layer of her locks, near her scalp. She captioned the clip with a warning to fans who may be contemplating dying their own hair: “don’t trust just anyone who says they’re good with color [sic] my hair continued to (f)all out in chunks for the next two months after this.”

Though, fans will soon see Billie’s hair makeover after the release of her new documentary. “I’m changing [my hair] after the doc comes out. It’s going to be the end of an era,” she said in reference to her signature black and green hair, adding, “I’m gonna give you a new era.” — We can’t wait for it!