Bella Hadid opted for a sporty look as she met up with friends in NYC, just days after her sister’s boyfriend Zayn Malik had an altercation at a bar.

Bella Hadid, 24, is in better shape than ever! The Malibu native stepped out in a bra-style white crop top as she met up with friends in New York City on Saturday, June 5. She rocked the revealing top with a red tracksuit, consisting of a loose fitting pant to reveal matching white underwear and zip down, bomber style jacket by Stussy. 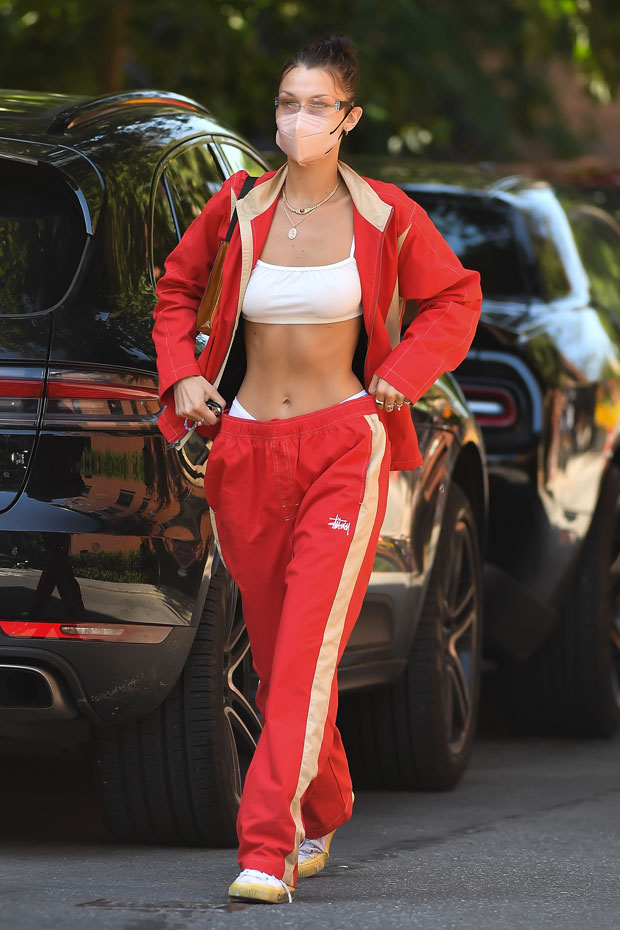 Her toned abs were on full display in the ensemble, which she completed with sneakers and a protective face mask due to COVID-19. The brunette threw her hair up in a banana-clip style bun for the low key outing, accessorizing with various jewelry pieces including mixed silver rings and layered gold necklaces. 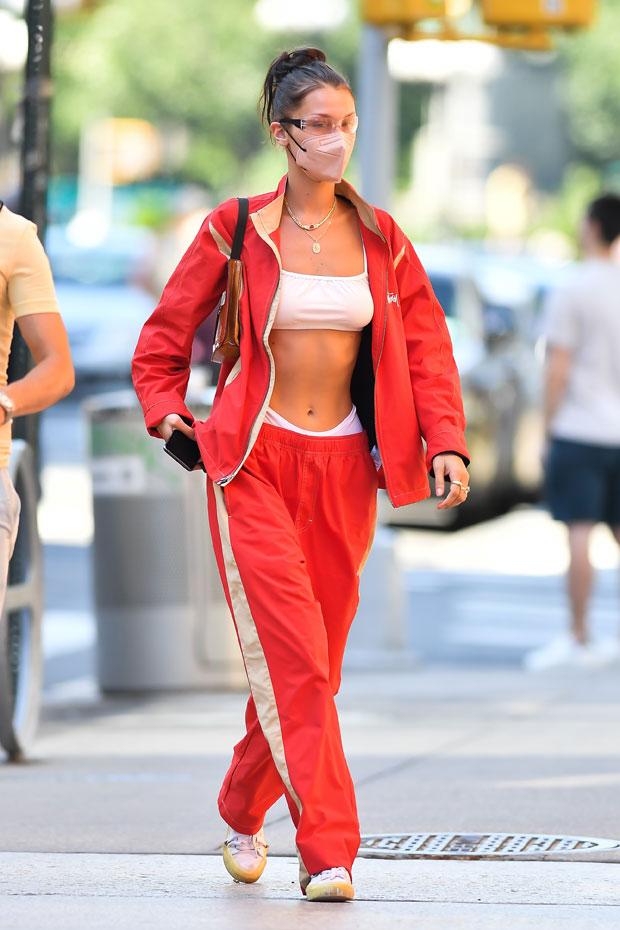 Bella has previously credited her toned body to fitness and a healthy diet. “I train and I work out hard for two hours — I don’t like to do the whole yoga thing. I think yoga is calming, it’s amazing, but if I’m going to go for it, I’m going to go hard,” she said back in 2017 to E! News. On the food side, she does have her vices, though — specifically pizza and coffee. “It’s like, every day,” she confessed of her pizza eating routine around the same time, adding, “I’m also a big coffee drinker. I’ll have three espressos before noon.”

The model’s latest outing comes amid her sister Gigi Hadid‘s boyfriend Zayn Malik having an altercation at an NYC bar. The former One Direction member was shirtless when the incident went down at Amsterdam Billiards Club in Manhattan’s East Village neighborhood on June 3. A “group of guys” left the bar next door — called Little Sister Lounge — when the confrontation happened in the early morning hours. Sources said that Zayn — who is dad to baby girl Khai with Gigi — allegedly tried to pick a fight.

In recent weeks, Bella has kept a low profile sans stepping out to pro-Palestine protests in May (Hadid is of Palestinian descent via her father Mohammed Hadid). “I am proud to be Palestinian,” she declared last month on Instagram, sharing a photo of her father’s passport. “There is no place for this. Especially in 2021! It has always been free Palestine. Always. I have a lot to say about this but for now, please read and educate yourself,” she also said. “This is not about religion. This is not about spewing hate on one or the other. This is about Israeli colonisation, ethnic cleansing, military occupation and apartheid over the Palestinian people that has been going on for years,” she posted via Instagram.