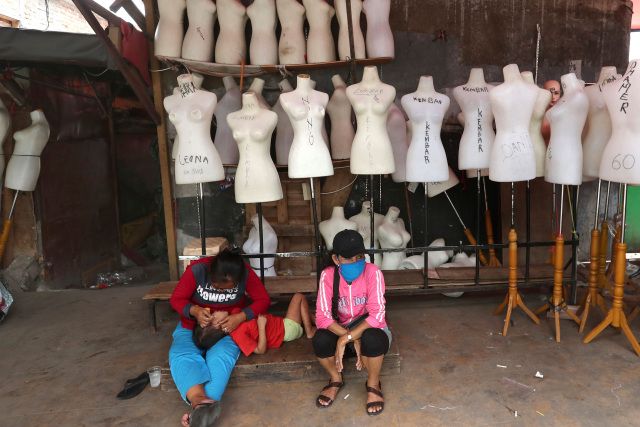 In fashion, there’s glamour and there’s garment work — and the former has done too well to distance itself from the latter.

But the fact of the matter is, much of the world’s mass market clothing and footwear is still made in one region of the world: Asia Pacific. And fashion can’t distance itself from the support it owes to the region.

More specifically, the Asia-Pacific region employed roughly 65 million garment workers in 2019, the most recent year for which data is available, according to the International Labour Organization. That’s 75 percent of all garment workers worldwide.

“It’s a staggering number,” designer Derek Lam said in a new video experience presented by WWD and Facebook, “The Foundation, The Future and the Stories Between: Fashion and the AAPI Experience” that will debut exclusively on Facebook Live from WWD’s official Facebook page on May 27. “There are a lot of ethical, environmental, sustainability issues in that 75 percent — that’s a large part of what’s being made on earth.…I feel like we have to be much more conscious of what we’re doing because it is such a large footprint.”

That’s one reason fashion’s light support for the Asian American and Pacific Islander community amid the recent upsurge in violence against them has come off, in some cases, as unpalatable. It takes more than brands touting “who made your clothes” in marketing messaging to show support for a community the industry’s foundation is built on.

What’s more, as designer Josie Natori points out in the video, “Where’s the business coming from? It’s Asians buying, right? So, it’s kind of like, hmmm.”

The power differentials between brands and suppliers has to change if fashion hopes to get itself on the social impact path many companies claim to be headed down, according to Joni Simpson, senior gender specialist for the ILO’s Regional Office for Asia and the Pacific.

“On the brand side, I think they could do some soul-searching around how they do business…with their suppliers. A lot of the costs are deferred, a lot of the responsibilities are deferred and there’s all kinds of repercussions of that that then play out,” she said. “There needs to be more done, even just in a broader sense, in thinking about how this is not sustainable in terms of working conditions and livelihoods of people who are working in the sector.”

The further away from the end consumer, the more the industry has overlooked what’s happening and underemphasized the supply chain issues that have long needed to be addressed. But it’s now those same end consumers calling on companies to be more transparent about what they’re doing where the clothing gets made.

“There are a lot of layers of exploitation and a lot of layers of core issues that need to be resolved. And that’s also the bigger picture, which is the global fashion industry is rooted in colonialism and racism,” said Johnson Yeung, regional urgent appeal coordinator of the Clean Clothes Campaign East Asia Coalition, from his home in Hong Kong. “Most of the garment production is based in Asia, particularly Southeast Asia and in developing countries, but there’s also the complexity of the Asian issues. When we talk about Asia, it’s a very huge place, but for the garment center it is the most vulnerable, marginalized, poor neighborhoods and communities who are engaging in this labor-intensive industry.”

When the fashion industry started looking to outsource in the ‘80s and ‘90s, Yeung explained, they looked to China and the Philippines, and then to places like Cambodia, Vietnam and Myanmar. (When one looks at the top 10 countries from which the U.S. imports apparel — China, Vietnam, Bangladesh, Cambodia, India, Indonesia, Mexico, Pakistan, Honduras, El Salvador — seven of them are in Asia).

“Most of these places are politically unstable, there is no infrastructure or rule of law, oftentimes the government is authoritarian and labor rights are not their priorities,” Yeung contends. “So, combining the colonialism and racism, it makes labor even more vulnerable and it makes exploitation really easy — and particularly for women of color in production countries.”

It happened when the pandemic hit and brands, concerned about the store closures that would dig into profitability, pulled out of placed orders with factories, calling in force majeure clauses and the like to absolve themselves of — or to defer — costs that factories had already footed the bill for. In many cases, it meant factory owners didn’t have money to pay workers who already struggle to make ends meet with what they earn making clothing (which can be less than $3 a day in places like Myanmar). In many ways, most brands tried to sweep this under the rug until call out campaigns like #PayUp forced them into taking care of their workers.

“It’s been disastrous for the garment sector here,” said Simpson from her home in Bangkok, though addressing the region at large. “I’m in touch with leaders from the worker and employer side in the garment sector through one of our programs and they’re not getting paid. And in some instances [workers] haven’t been called back [after being laid off or put on hold until there was work for them to do or funds to pay them with]. “…The conditions of work are getting worse because employers aren’t able to guarantee the contracts, so it’s been highly detrimental.”

While Simpson did indicate some positive trends of businesses taking the opportunity COVID-19 presented to unlearn a lot of behaviors and practices and improve conditions for the human capital side of things, there’s still a lot of “unfinished business,” as she put it. And particularly as it pertains to women.

For the most part excepting luxury and niche markets, the rest of fashion has built a foundation based on low-cost, low-skilled, largely female labor. Roughly 80 percent of garment workers globally are women, according to the ILO. In Asia and the Pacific, 35 million women work in the garment, textiles and footwear sector.

“That makes about 55 percent [of the overall garment sector],” Simpson said. “And that may sound low and that’s because South Asia — for example, Bangladesh, of course, is a major garment producer and South Asia has a very low women’s labor force participation.…If you took a cluster like Southeast Asia, the rates [of women workers] would be much higher.”

It’s high enough, according to Yeung, that exploitation is commonplace.

“Since 80 percent of the garment workers [globally] are mostly women — sometimes they are under age, too — it’s really easy for their male counterparts or their supervisors to exploit their social status by tricking the workers into that trap by asking for sexual favors, or even just gender-based violence occurs in factory plants and it’s used as a tool to keep women down and keep them exploited,” he said. “It’s not just in the [Asia-Pacific] region — in every single production country, brands are not doing enough, and the reason why the brands and companies decide to put their factories, or find suppliers in these producing countries is because labor is cheap, there’s no labor rights protections, or really minimum protections for workers, and that causes exploitation and a lot of atrocities.”

Addressing some of those atrocities, a report released in September by global risk consulting firm Verisk Maplecroft, said modern slavery risks have been surging in Asia’s manufacturing hubs over the last four years, and the pandemic has only worsened the problem.

With consumer demand stilted at the height of COVID-19’s rage, factory orders dried up, owners sent workers home as factories either shuttered or had to downsize, and more of those in need of work have been pushed into the informal economy where labor protections are severely lacking, if present at all.

“The industry is facing multiple pressures brought on by coronavirus-related disruptions, which in turn are fueling labor and other human rights abuses,” said Verisk human rights analyst Sofia Nazalya. As the September report — which ranks countries by their risk to businesses as far as association with modern slavery — noted, “The data shows a key factor for the drop in ranking for many of Asia’s manufacturing giants has been an increase in the severity and frequency of violations. Growth in such abuses has been witnessed across Bangladesh, Cambodia, China, Indonesia and Vietnam.”

Hiding behind hashtags and doling out donations downstream, when the garment workers who make the glamour possible upstream still don’t earn a living wage, is an unsustainable business model for fashion to rest on. And if the Triangle Shirtwaist Factory fire brought widespread attention to sweatshops in 1911, the Rana Plaza building collapse in 2013 proved the issue ongoing, and sweatshops still exist in 2021, the problem is systemic.

“The industry really needs a systematic change. Twenty-five years ago, when I was a kid, we heard about sweatshops, we heard about child labor, they still exist, systematically. We have an internment camp — not an internment camp but lots of internment camps — in Xinjiang in northwestern China where Uighur minority and other Muslim minorities were incarcerated and they are forced to work for garment factories and cotton yarn and then it becomes forced labor,” Yeung claimed. “The industry needs to first — like other industries — they need to abandon profit maximization as their sole purpose in their businesses. Because when the entrepreneurs or those who are sitting on boards or the investors, if all they care is about profit, then a very sensible option for them is to try to lower the labor cost, try to minimize preventive measures because those will cost them money.”

The solutions to more ethical supply chains for fashion aren’t new or groundbreaking and discussions and forums around what should be done have been going on for years. Most working in this fight for fashion’s labor force agree that it boils down to a handful of seemingly simple things: transparency — including disclosing factory names and locations; really giving workers a voice and a seat at the table; taking codes of conduct a step further, instead enforcing binding agreements between brand, supplier and union (which would mean workers are allowed to organize themselves without repercussion) against things like harassment and unreasonable working conditions, and paying a living wage.

“By paying a fair share of wages to workers you can actually help them, not just lifting them out of poverty, it can make them have a real life, to develop their life goals, to have quality time with their children and family,” Yeung said. “If we leave a huge bunch of, like, 75 percent of the world population in vicarious work and poverty, they will ultimately suffer a lot and our society will not be able to progress.”