NEWARK — “Clear the floor,” said Nile Ahmid, a D.J. at the Branch Brook Roller Skating Center in New Jersey. It was around midnight on a recent Sunday, and he had been spinning house and hip-hop tracks for the past three hours. “The next skate is for trains only,” he added.

The lights came on, and 400 skaters brought their wheels to a halt. On cue, they linked arms in prearranged groups of three to 10 rollers to form so-called trains, a hallmark of the skating style specific to New York and New Jersey.

Rollers ranged in age from late teens to 60s, and were both gay and straight. But in terms of race, about 95 percent were African-American, a demographic that has both defined and given historical context to similar adult-night skating events in scores of cities nationwide.

“Skating goes deep for us,” said Brandon Young, 27, a custodial worker in the Newark public school system, who skates at Branch Brook most Sundays and who teaches others the form. “It’s a whole culture.” 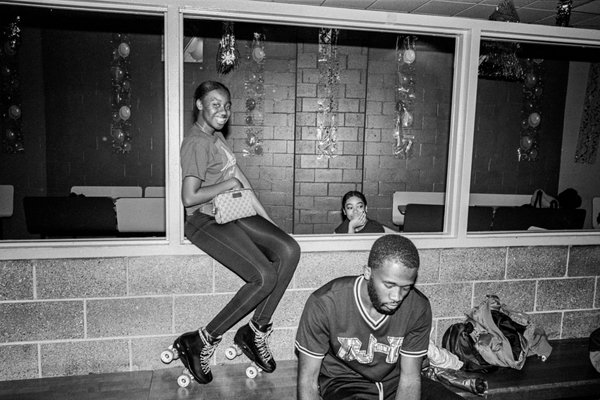 The connection between African-Americans and adult skate nights is deeply linked to the country’s wrenching history of segregation. That relationship, which includes racist policies and the rich culture that rose up in reaction, is the subject of “United Skates,” a documentary that opened this weekend in New York and Los Angeles and will be shown on HBO in February.

Guided by Tina Brown and Dyana Winkler, who are first-time directors, the film details the insidious machinations that have kept black and white skaters apart, dating back to the Jim Crow era. It also celebrates the art and style of the black night-skating scene.

There’s a certain urgency to the scene. Rinks in major metropolitan areas have been shuttering over the last decade, largely felled by gentrification.

Neither Ms. Brown nor Ms. Winkler skate, but several years ago they became fascinated by a group of day rollers they happened upon in Central Park, assuming they were the last vestige of the roller disco trend of the late ’70s and early ’80s.

“They told us, ‘Skating isn’t dead. It’s just gone underground,’” Ms. Brown said. “You need to come with us to a national night skate party.”

So that night at 3 a.m., they jumped on a bus at the Port Authority Bus Terminal in Manhattan, bound for Richmond, Va. Arriving at the rink at midnight, they saw thousands of skaters from around the country reveling in the scene.

Each region had a distinct style. The rich pageant included Chicago’s J.B. Style, in which skaters sync their steps to the funky songs of James Brown; Ohio’s “stride,” with its wide, loping skating patterns; and Philadelphia’s “fast backwards,” in which participants form trains that snake sleekly backward.

Phelicia Wright, a property manager in Los Angeles who skates in many styles, appears in the film. “At church, you leave your problems at the altar,” Ms. Wright said. “At the rink, we leave our problems on the wood.”

The night skate scene forms its own intimate community. At Branch Brook, many participants have known each other for decades. “I found it incredible that people would leave their bags on the floor, rather than use the lockers,” Ms. Winkler said. “It would be seen as disrespecting your family if you stole from someone.”

The rinks also played a pivotal role in the early promotion of hip-hop. In the ’80s, when artists like Salt-N-Pepa, Naughty by Nature, N.W.A. and their fans were eyed with suspicion by many established concert halls, robbing them of normal bookings, rinks happily accepted them. Dr. Dre got his start as a D.J. spinning at Skate Town in Los Angeles.

Respect for the rinks runs so deep that at the peak of the gang wars between the Crips and Bloods in Los Angeles in the ’80s, places like Skate Town (in Bloods territory) and World of Wheels (Crips) were considered exempt from the conflict.

The hip-hop connection continues to this day, captured in the movies “Roll Bounce,” a 2005 period piece starring the rapper Lil’ Bow Wow, and “ATL,” a 2006 comedy-drama with T.I. The music video for “Theme Music,” released this year by Fabolous, Jadakiss and Swizz Beatz, featured skaters from Branch Brook.

But the skating world’s sense of community belies the history of violence and prejudice imposed upon it. During segregation, rinks kept black and white patrons apart. “Skate-in” protests in the 1960s paralleled that day’s sit-ins.

Photos from that era by Richard Avedon show black skaters carrying signs that say things like “Put Down Hate and Let’s Skate,” while others show Ku Klux Klan members holding their own placards bearing swastikas.

Even after integration, many rinks kept blacks and whites separate by advertising special nights with coded names like “Soul Night” or “Martin Luther King Jr. Night.” In the ’60s and ’70s, if black skaters came during a white night, Ms. Brown said, “some rinks would hire thugs to trip them on the wood, or rink owners would claim they didn’t have skates to rent in those patrons’ sizes.”

Even today, many rinks have signs that read “no saggy pants,” or “no hip-hop music,” which some interpret as discouraging African-American patrons. Other rinks ban smaller custom wheels, a style favored by many black skaters, because, the rinks say, those wheels harm the wood floors.

Pete Russell, 43, who creates customized skates at his store SK8 Fanatics, near Long Beach, Calif., said those claims are unjustified. “We would never use a wheel that would do damage,” Mr. Russell said. “The special fiberglass wheels we use glides on the surface of the floor, whereas the normal wheel, with urethane, can actually pull the finish off the floor.”

The repugnant tactics that keep black and white skaters apart may have helped solidify a distinct culture. “One of the ironies of segregation is that it created freedom for African-Americans to create magic in their own spaces,” Ms. Winkler said.

That’s particularly evident in how the skate shoes themselves have become fashion statements. Mr. Russell can turn nearly any type of footwear into a skate. “We’ve done Nikes, Converse and Jordans, as well as work boots and dress shoes,” he said. “We actually did a pair of stilettos once,” for the R&B singer Mýa.

“It’s considered recreation, but if you look at what the people are doing on eight wheels, it really is an artistic form that needs to be recognized,” Mr. Russell said.

At the same time, the world that night skating occupies has been threatened by rising real estate prices. Over the last decade, scores of key rinks have closed, including Skate Depot in Los Angeles, Orchard Skating Rink in Baltimore, Rich City Skate in Chicago and the Empire Roller Rink in Brooklyn.

Despite the popularity of these establishments, they have often been replaced by big-box stores like Walmart and Home Depot. (A self-storage facility stands at the former Empire Roller Rink.)

Some cities now have no rinks at all, forcing enthusiasts to travel far to take part in specially advertised national shows, which invite skaters from all over the country to participate.

One rink still going strong is Branch Brook. For more than four hours on a recent Sunday, skaters raced, glided and mingled.

Wheel demons like Shaquan Moore, a 20-year-old security guard from Newark, blazed through the dense constellation of skaters like a shooting star. Others, like Sharon Lee, 60, of Elizabeth, N.J., a skater for half a century until a back injury sidelined her, come for the good vibes. “I just love to watch people skate,” she said.

Iva Kaufman, one of the few regular white skaters (and one of the oldest at 64), arrives weekly from her home on the Upper West Side of Manhattan. An alumna of the Roxy’s roller-disco scene, Ms. Kaufman, who consults for nonprofit businesses, said, “It’s the only place I know where I can interact with folks who wouldn’t be in my normal social circle.”

“Skating in this space allows me to cut across race, class, sexual orientation and generations,” she said.

Antwan Vines, 25, a delivery worker from Newark and a star of the local scene (he appeared in Fabolous’s recent video), said he prefers skating to just about any leisure activity.

“If you go to a basketball jam, you can’t have the great hip-hop music we have,” Mr. Vines said. “If you go to a club, you’re always looking around to see who’s there. But skating offers a kind of fun that goes to the soul.”