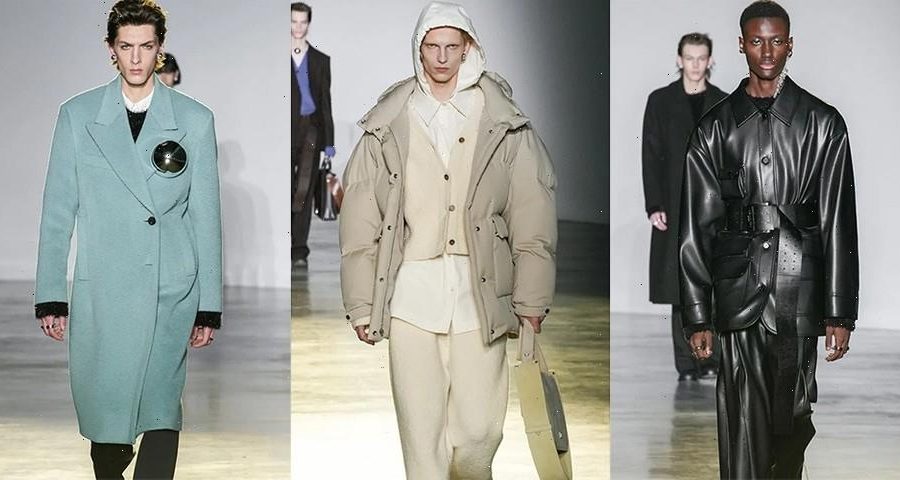 The eponymous House of Youngmi Woo, WOOYOUNGMI, has exercised traditions and tailoring with South Korean sensibilities for Fall/Winter 2023. Playing on proportions, the collection was obsessed with oversized belts, straps, and jewelry that took form on multiple looks, numbers that in contrast were fitted, effortless, and highly detailed.

FW23 was a mixture of the macro and the micro, a concept best seen in look eight. An oversized, down-filled padded jacket worn over a shrunken cardigan and an elongated white shirt was met with loose jogging pants and narrow running sneakers bearing a large silver orb on them; and it was these proportional tales that won the show.

Likewise, the nips, tucks, and folds of a dust blue double-breasted car coat were conflicted with the silver orb brooch, while a varsity jacket kitted in erupting volcano embroidery was worn with a micro skirt of a technical nature, combined ushering in WOOYOUNGMI’s delicate balance of refinement and maximalism.

If it weren’t for a palette of cream and gray, the collection would be seen as big, bold, and loud. But that was no mistake, as WOOYOUNGMI did what all greats such as Raf Simons, Jil Sander, Lemaire, Dries Van Noten, The Row et al, do: create a wearable capsule wardrobe of mix-and-match essentials.

Once the formalwear was out of the way, the brand played with textures and joy. Fuzzy blue tinsel glitter jumpers and vests met intarsia knit erupting volcano vests, workwear-inspired tailored jackets in burnt orange, extravagant chrome jewelry hanging from a single ear, and stalking trousers cut with cargo touches and riding boots to bring it back full-circle.

Take a look at WOOYOUNGMI FW23 in the gallery above, and stay tuned to Hypebeast for more Paris Fashion Week FW23 content.

In other news, here’s what Hypebeast had to say about Casablanca FW23.
Source: Read Full Article