Truthfully? The first time I saw “The Cher Show,” I walked in with a splitting headache. On that Saturday in early December, the men in sailor suits who strolled out at the top of the show to back Cher up on “If I Could Turn Back Time” didn’t make much of an impression on me. Neither did her words as she informed them that they were free to go.

“Thank you for your service, gentlemen!” said this version of Cher, imbued with potent charisma by Stephanie J. Block. “Ladies, front and center!”

As the male dancers exited into the wings of the Neil Simon Theater and a chorus of female dancers entered, the mission of the show had been spelled out. This blindingly sparkly jukebox-musical celebration of Cher’s life, which opened on Broadway this month, isn’t actually for the guys. It’s aimed at the women.

Mirrored walls and Bob Mackie costumes notwithstanding, “The Cher Show” — which has a book by Rick Elice (“Peter and the Starcatcher”) and stars three actresses playing Cher at different periods in her life, from her childhood in the 1950s to the present — is no winking ode to a camp icon. It’s something gentler and more compassionate, albeit with a wry sense of humor: the story of a female human being who became a superstar.

Granted, that is also more or less the arc of the earnestly elegant “Beautiful: The Carole King Musical,” which has been running for five years at the Stephen Sondheim Theater, and the chilly, plastic “Summer: The Donna Summer Musical,” whose much shorter residency at the Lunt-Fontanne Theater will end on Dec. 30. Phyllida Lloyd’s production of “Tina: The Tina Turner Musical,” which opened in London in the spring with a book by Katori Hall, is expected on Broadway next fall.

Like them, “The Cher Show” (props to its creators for deviating from the title template) doesn’t mean to be highbrow entertainment; the constraints of the genre don’t allow it. As a pop-culture amusement, though, it’s analgesic fun. (My headache? Swiftly vanished.) And for all its comedy, it takes Cher — who is one of its producers — seriously.

It also manages to explain, for those of us who puzzled over her attraction to Sonny Bono — her first husband and onetime singing partner — what this funny, spectacularly talented beauty was even doing with him. 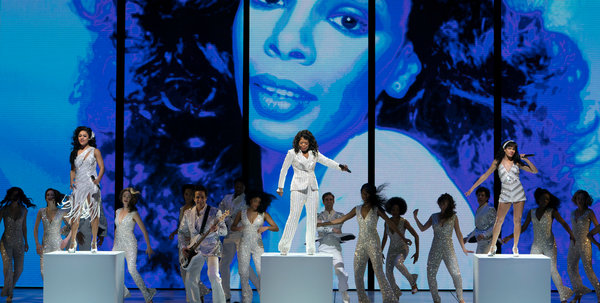 Tell me that’s not a mystery that needed solving. It was for me, and I’ve never particularly been a Cher devotee.

I’m not sure it’s quite accurate to call “The Cher Show” a feminist musical. Almost all key members of the creative team are men. (The teams for “Beautiful” and “Summer” have a similar gender makeup.) Yet onstage, women — including the splendid Emily Skinner as Cher’s resilient, supportive mother — dominate.

And at a moment of feminist resurgence, “The Cher Show” even has something in common with “Gloria: A Life,” the Gloria Steinem bio-play running Off Broadway. Inspiration can arise from seeing, up close and in flashback detail, how a famous American came defiantly into her power in a culture that expected demure acquiescence, and who along the way discovered herself.

In Cher’s case, that involved significantly more spangles — clothing being one of the ways that she rebelled. If a musical about her doubles as a costume parade from start to finish, how does that not make perfect sense?

A genre with cheese baked in

Nostalgia is a reliable lure for audiences, and jukebox musicals — whose long-ago pop hits and idealized period design whisk theatergoers back to their younger days — can have very long legs.

“Jersey Boys,” about Frankie Valli and the Four Seasons, ran on Broadway for 11 years, with a book co-written by Mr. Elice and a production directed by Des McAnuff (“Summer”). But shows like that can face a tough time with critics, who don’t mind a bio-musical that’s built from the ground up (“Hamilton,” say) but get skeptical if it’s constructed around familiar tunes.

It’s a genre with a quantity of cheese baked in, and it doesn’t help that the basic recipe, when it comes to shows about women, is so unvarying.

Amid the against-all-odds success will be man troubles, struggles to balance creativity with parenting, perhaps some egregious financial victimhood. Yet those tropes are drawn from the real world, and part of the appeal of these shows is validation: Even leading their extraordinary lives, these women couldn’t escape the hazards of being female.

But the quality of ingredients matters. “Beautiful” succeeds so well partly because of its score, made up of songs written by Ms. King and her first husband, Gerry Goffin, and by Barry Mann and Cynthia Weil. The depiction of the foursome’s friendship lends texture to a book that alternates screwball and corn as it follows Ms. King from age 16 to 29 — a far tighter focus than the grand sweep of “The Cher Show” or “Summer.”

There is spikier, more bantering humor in “The Cher Show,” and its physical design contributes enormously to the gentle time travel of the musical — even when you get back there and remember that those were the bad old days. Poor “Summer,” with its set’s reliance on cold electronic screens, never viscerally evokes the eras it traverses, and its dialogue is so artificial that not even LaChanze, as the eldest of its three Donnas, can make it seem otherwise. The problem isn’t the divided selves; it’s that they’re not convincingly written.

“The Cher Show,” however, makes excellent emotional sense of the three versions of its heroine: Star, the self-possessed Cher of the past several decades; Lady, the glossy-haired Cher of the 1970s; and the dreamily awkward Babe, who is only 16 when she falls for Sonny. Cher, we learn, has been wounded by being a punch line, and these iterations of her aren’t sendups. They’re tributes — friendly and vulnerable and ambition-fueled, and differing degrees of down to earth.

There is something moving in the way that the Chers argue with and encourage one another in between episodes from their life. When Star wins a role in “Come Back to the 5 & Dime Jimmy Dean, Jimmy Dean,” a Broadway show directed by Robert Altman (“Well, I think you ruined ‘Popeye,’” she tells him), she hands the task over to Babe, who dreamed of acting onstage.

True, “The Cher Show” skips over the disastrous reception to Altman’s production, but that’s not what the scene about the play represents anyway. It’s about Cher’s blossoming as an actress. Ceding the stage to Babe is a gesture of tender remembrance.

So is the depiction of Sonny and Cher’s transgender child, Chaz, whom we glimpse as an infant swaddled in a blue-and-white baby blanket. It’s a moment not of historical revisionism but of wordless acknowledgment that this little person was a boy all along, no matter what the birth certificate said.

Otherwise, though, the show largely leaves Chaz and Elijah, Cher’s son with Gregg Allman, in peace. Men, as you’ll recall, are not its primary interest. Cher is — she of the , impeccably made up, inscrutable public face.

And this is the surprising thing about “The Cher Show.” For all its excesses of shimmering costume and gleaming scenery — necessities of the genre, accouterments of Cher’s career — it strips away her masks to reveal a person underneath.

Well, three people. Blend them together and you’ll get one sort of like Cher. She’s a complicated lady.

12/20/2018 Entertainment Comments Off on Why ‘The Cher Show’ Gets Me, Babe
Recent Posts