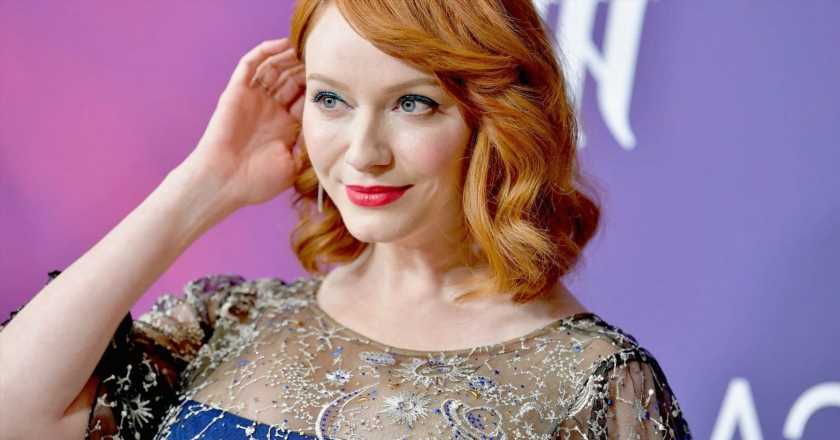 Kayleigh Dray is Stylist’s digital editor-at-large. Her specialist topics include comic books, films, TV and feminism. On a weekend, you can usually find her drinking copious amounts of tea and playing boardgames with her friends.

“There are only two sentences to say about a bra,” says Christina Hendricks, aka the star of Mad Men and Netflix’s Good Girls.

Frequently branded “the best show ever,” Netflix’s Good Girls sees Christina Hendricks step into the shoes of the enigmatic Beth Boland, a suburban mum turned criminal – and she does it with serious aplomb.

With the much-anticipated fourth season due to drop on the streaming platform later this summer, the talented actor has been fielding questions about the show from the press left, right, and centre.

However, Hendricks has reflected on how things have changed since her time as Joan Holloway on Mad Men, explaining that journalists wanted to ask her about one thing, and one thing only, during the show’s 2007 to 2015 run; her body.

That’s right; at the time, countless articles were dedicated to Hendricks’ “hourglass figure.” Indeed, M&S brought out an old-fashioned corsetry bra inspired by Hendricks’ character, and her costumes – fitted dresses with nipped-in waists and knee-length pencil skirts worn over girdles and long-line lingerie – influenced a host of fashion designers.

From the actor’s perspective, however, all of this proved an “annoying distraction” from the show’s storyline.

“There certainly was a time when we were very critically acclaimed, and getting a lot of attention for our very good work and our very hard work, and everyone just wanted to ask me about my bra again,” she explains to The Guardian.

“There are only two sentences to say about a bra.”

Refusing to minimise the existence of sexism and sexual harassment in the TV and film industry, Hendricks continues: “I don’t know one musician or one model or one actor who has escaped that [objectification].

“I have had moments – not on Mad Men; on other things – where people have tried to take advantage of me, use my body in a way I wasn’t comfortable with, persuade me or coerce me or professionally shame me: ‘If you took your work seriously, you would do this …’”

Christina Hendricks says the press only ever wanted to talk about her bra during her time on Mad Men.

Thankfully, the actor has found things to be very different on the set of Good Girls.

Fans of the series will already know that Hendricks’ Beth has an incredibly intense and chaotic – albeit frightening – relationship with Manny Montana’s Rio.

“It’s the most reactionary relationship that you can have,” Hendricks explains to Awards Daily.

“It’s mysterious and it’s confusing. It’s that power play that leaves you with that horrible feeling of letting someone control you. You want to fight back, and you want to be the controller.”

Hendricks adds: “The back and forth cat-and-mouse game is interesting. But it’s also business and there’s sex, but it’s much more than that too, so it’s really confusing for her.”

However, during a chat with The Black C.A.P.E. Magazine, the actor has stressed that her scenes with Montana are always filmed in a way that allows her to feel safe and in control of the situation.

“[Manny] is a great actor and we have great chemistry working together… it’s just a very sort of respectful work,” she says.

“It’s exciting and stuff, but it’s not as… it’s much more professional than anyone would think.”

It remains to be seen what’s next for Beth and Rio (not to mention the brilliant Retta and Mae Whitman’s characters, Ruby and Annie), but hopefully we won’t have long to wait before we can sink into some new Good Girls episodes.

In the meantime, we hope that Hendricks continues to be asked the smart, intelligent, and thoughtful questions she deserves to be asked about her work.

Because, let’s face it, there’s 1,000,000 things more interesting about a woman than the size of her goddamn bra.

Season four of Good Girls resumes in the US on NBC on 24 June. Seasons one to three are available in the UK on Netflix.