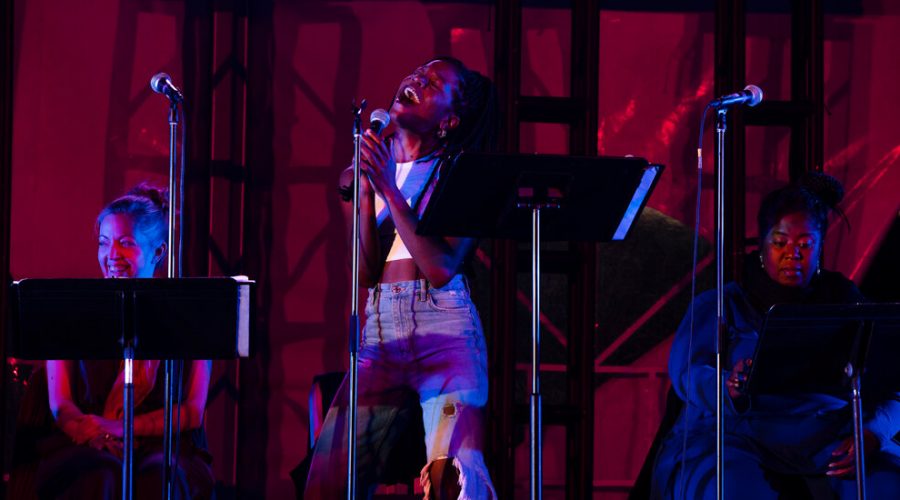 POUGHKEEPSIE, N.Y. — For Michael R. Jackson, the question was quite specific. What kind of underscoring do you write for a melodramatic yet serious musical inspired by soap operas, Lifetime movies and “Law and Order: SVU”?

Jackson has been developing his musical, “White Girl in Danger,” since 2017, through so many workshops and readings that he can barely list them all. He had already nailed down the plot, about a Black performer on a surreal soap who schemes, from the “blackground,” to outshine the white stars and get a story of her own.

Now he needed to figure out something smaller but crucial: how to apply the organ stings, ominous monotones and other instrumental plot thickeners that would underline the satire and keep the audience on track.

That was the reason he spent two weeks recently on the stately campus of Marist College here, working in free rehearsal halls and sleeping in an undergraduate dorm bed. He was a guest of New York Stage and Film, the quietly influential incubator of new plays and musicals (and screenplays and television scripts) offering year-round workshops and residencies. And though its theater season each summer is a must-see in the industry, even that is more inward facing than outward, with only a few performances of each show and no reviews allowed.

Call it a concierge service for works in progress.

“These days have been nothing short of stupendous and invaluable,” Jackson told me last week as “White Girl” was preparing for its debut under an open-sided tent along the Hudson River. He was not referring to the festival’s coffers; the Marist season was pay-what-you-can. Rather, like all the artists I spoke to, he was excited by what he’d learned in rehearsal, and by what he expected to learn from the audience that weekend as it laughed, gasped, cheered or fell silent.

“What question are you asking that you can’t ask anywhere else?” said Chris Burney, Stage and Film’s artistic director, discussing what he sees as the organization’s mission. “What’s your big dream project? That’s why we are here, outside the bounds of the commercial theater.”

Outside its bounds, perhaps, but not a stranger to it. Many shows developed at Stage and Film in its 37 seasons have had long and profitable afterlives. The best known is “Hamilton,” which appeared as “The Hamilton Mixtape” in 2013, but Poughkeepsie has also been a stop in the journey of “The Wolves,” by Sarah DeLappe, “The Humans,” by Stephen Karam and “A 24-Decade History of Popular Music,” by Taylor Mac.

Those were big works, and so is “White Girl”: Stage and Film hosted Jackson and a company of 22, while providing advice, support, space and two paid apprentices. Jackson, who won the 2020 Pulitzer Prize for his musical “A Strange Loop,” now wending its way toward Broadway, is a big name, too, and “White Girl” is already on track for a New York production, after several workshops over the last two years at the Vineyard Theater.

But the season’s smaller shows, by artists not yet as well known, got much the same treatment as they set out to answer their own idiosyncratic questions. Though I didn’t get to see “South,” by Florencia Iriondo, who was turning her five-character musical into a solo show so it could be performed more easily in a pandemic environment, I saw the other four productions on offer, three in the tent and one online, with a huge star, Billy Porter, attached.

At whatever stage in their evolution, from nowhere near finished to almost complete, the shows received the same careful, sheltered airing. Audiences included some theater professionals but they did not bring with them the hothouse feeling that so often and unhelpfully hangs over developmental work in New York City.

Well, the tent was hot, especially at matinees. (Admission included a precautionary temperature check as well as a jaunty paper fan.) And the atmosphere was more informal than in previous seasons, which were held at theaters on the campus of Vassar College nearby.

The switch was not an aesthetic choice, though. Two weeks before Burney was to announce his first season as artistic director, in March, 2020, the pandemic hit. Vassar shut down in the middle of spring break, meaning that Stage and Film, even if it were functioning by summer, could not do so there; the dorms that usually housed artists were filled with the students’ abandoned belongings.

The Vassar programs were canceled, but some of this season’s most promising productions emerged from the disaster. One was “Mexodus,” by Brian Quijada and Nygel D. Robinson, which began when Quijada was “scrolling good old Facebook many years ago,” he told me, and came upon a bit of history he’d never learned, about thousands of Black people who had escaped slavery not by the familiar northern route but by a southern one, leading to Mexico.

“My parents” — who are from El Salvador — “both crossed in the ’70s,” Quijada said, meaning from Mexico to the United States. “I wanted to explore this reverse border story but didn’t know how I would do it alone.”

He didn’t have to; Robinson, whom he met at a conference, was on board the minute Quijada shared the idea; they began riffing on ideas the next day, including one that became the first song.

“It could have just been a little passion project,” Robinson says, “if Stage and Film hadn’t put some fire under it.”

The fire came in the form of an offer, said Quijada, who had worked with the institution before: “They said, ‘Is there anything you want to do? We have funds.’”

This is not the kind of question artists, no matter how seasoned, usually hear from producers. When Quijada and Robinson picked their jaws up off the floor, they shared their idea, which as yet had no plot or structure.

Stage and Film loved it anyway, suggesting that the two write a song each month from their quarantines in different cities as they built the story into a virtual concept album. Then, when live theater returned, Burney promised to bring them to Poughkeepsie to work on it in person. “They even sent me a new bow for my bass,” Robinson said.

By the time the two men arrived here in July, the score was in good shape to tell the story they’d settled on, about an enslaved Black man (played by Robinson) who crosses the Rio Grande into Mexico after murdering a white man who has raped his sister. He nearly dies en route but is nursed back to health by a Mexican farmer (Quijada) with a troubled past of his own.

The specific question the authors needed to answer was technical: How could they perform the music they had created electronically during the pandemic, including frequent looping, in a live environment?

When I saw “Mexodus,” they were still sorting out that complicated choreography, but it never got in the way of the story, or of the feedback the artists were receiving from the audience.

The creators of “Interstate,” a more traditional pop-rock musical — if one about nontraditional characters — wanted to address a problem that was itself more traditional: How could their second act best develop the themes of the first? After nine years of work, the setup, about a lesbian and a transgender man who tour as a duo called Queer Malady, was working just fine. But when a developmental production in Minneapolis was shut down by the pandemic, Melissa Li and Kit Yan felt that the rest of their show, focusing on the duo’s conflicts and a desperate fan, still needed work. Stage and Film stepped in.

The presentation I saw thus skipped the first hour, starting just two songs shy of what would normally be the intermission. If that foreshortening meant meeting the characters in mid-arc, it allowed the audience to feel it was meeting the show in mid-arc, too; like the other productions at Stage and Film, it was revealing itself before being set in stone.

That’s a thrill pretty much unique to this model of development. Still, a static production of new work can be thrilling too. That was the case with Porter’s show, “Sanctuary,” for which he is writing the book, about a pop diva with big issues, and Kurt Carr is writing the gospel score.

The video that streamed for five days recently didn’t include any dialogue; Porter says that his work with Stage and Film is aimed at figuring out the tone of the book scenes in the context of such overwhelming music. (The soloists included Deborah Cox and Ledisi; Broadway Inspirational Voices was the luxury chorus.) If it was not quite stage and not quite film, “Sanctuary” is nevertheless the kind of thing Stage and Film does best: letting you experience new work before all its questions are answered.

08/03/2021 Entertainment Comments Off on Where Do Theater Artists Go to Ask Questions? Poughkeepsie.
Recent Posts