Connection or isolation? Intensity or escape? This spate of shows that put the watcher to work are rewarding, but often in contrasting ways. 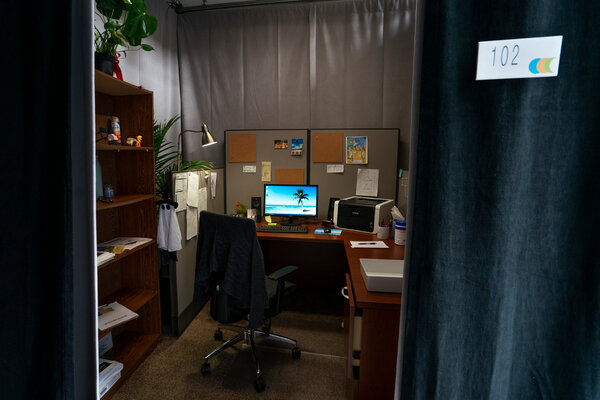 By Laura Collins-Hughes and Alexis Soloski

Could we get a volunteer up here?

That’s not an invitation theater fans are likely to hear from an actor on a physical stage anytime soon, but it is the beguiling come-on from a small flock of experimental productions happening right now — online, over the phone and even in person. (Well, in cubicle, if you participate in “Temping,” in the East Village.)

All of them depend on the willingness of a spectator to step forward and become a star.

We took individual turns in the spotlight, then sat down, remotely, one recent weekday morning to chat about this enticing development in pandemic theater. These are edited excerpts from our conversation.

LAURA COLLINS-HUGHES Alexis, in the Before Times, were you one of those audience members who are happy to be brought up onstage, or not so much?

ALEXIS SOLOSKI Well, on my third date with my husband, we went to a magic show and they asked for help with an ax-throwing act and I made myself the target. So yes, shamefully, I am. You?

COLLINS-HUGHES I would way rather hide behind my notebook in the audience. So it’s weird that I was eager to go to “Temping,” the show at the Wild Project that has exactly one performer: the audience member, playing a temp hired to fill in for an actuary. It’s a piece that predates the pandemic, but its setup is ideal right now.

SOLOSKI I’ve read the script, but I haven’t seen it yet. Is “seen” even the right word? “Done?” “Experienced?”

COLLINS-HUGHES “Seen” is wrong — there’s no audience, live or otherwise — but “done” is right. The audience member does everything, including, if your brain works like mine does, thinking about what you’re going to wear on your first day. 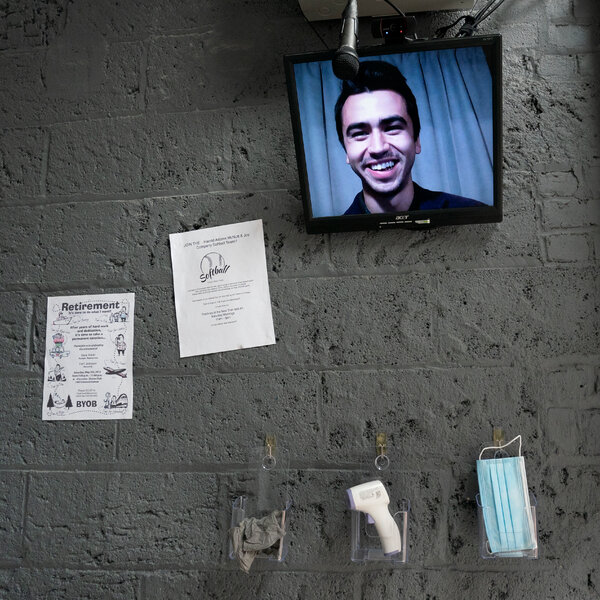 SOLOSKI So what did you wear?

COLLINS-HUGHES I decided on a skirt and a knit top, but it was in the 70s out, so I rationalized that my temp would be the kind of person who risks violating a no-open-toed-shoes rule. I wore sandals.

SOLOSKI I remember skirts. The show, presented by Dutch Kills Theater Company, tries to mix mundane office tasks and metaphysics. How was it?

COLLINS-HUGHES It is a show about how fleeting life is, and how necessary some degree of risk is to happiness, but really the storytelling is a weak link. The design is the strength, with loads of voicemails and audio messages to play, and emails to read and answer.

It does require a basic proficiency in Microsoft Office, and I wondered what happens if, say, you’re hopeless at Excel spreadsheets. But there are workarounds for that; the show responds differently based on your actions.

And it really is fun to have the lighting change according to what you’re doing right that second. That’s one clue that while you’re alone in the cubicle — which is nice and airy, so it feels safe — behind the scenes, someone is watching.

SOLOSKI So were you a good temp? And how did it feel to be the star, knowing that two members of the company, a room away, were surveilling you?

COLLINS-HUGHES I was a good temp! And it was reassuring that I wasn’t all by myself — that this show, which runs about 50 minutes, was more than just a video game that I could have played at home.

SOLOSKI So you are comfortable acting. Just for very small audiences. Me, I starred in a show, too, “Read Subtitles Aloud,” short videos from Media Art Xploration, PlayCo and the Turkish theater festival A Corner in the World, in which the participant plays a former member of a theater company web-chatting with onetime colleagues. Subtitles appear on the screen. When read aloud, they create the illusion of a conversation between you and the prerecorded performer.

COLLINS-HUGHES Did it work for you? I tried the first episode and found it frustrating.

SOLOSKI The first episode is frustrating. It assumes a ton of intimacy. Plus kissing. I don’t want to kiss anyone right now. Even through a screen. Even if they can’t see me. But I did enjoy the later ones as I learned more about the company, their relationships and what I guess I have to call “my character.” I’ve seen — sorry, done — the first five and I imagine I’ll do the rest, too.

COLLINS-HUGHES Did it bug you at all that, no matter how you delivered your lines, there was no exchange of energy with your scene partner?

SOLOSKI A little. It’s a necessary limitation of the form. But it doesn’t have to be too limiting. Last night, I went through it again, investing more emotion. The energy is there if you want it. It’s a dance, a pas de deux. If they step forward, you step back and then it mostly works.

COLLINS-HUGHES Did it feel theatrical?

SOLOSKI I felt theatrical! And occasionally embarrassed. There’s a part where I had to sing “Purple Rain.” So even though it wasn’t live, I felt present. Too often, pre-pandemic, I would see plays that didn’t seem to acknowledge the audience at all. Now, I find that a lot of experimental work takes particular care of us — I’m thinking of pieces like “Cairns” and “Tempest” in VR — valuing audience experience and trusting us to do a lot of the imaginative work ourselves.

COLLINS-HUGHES I experience the screen as much more of a barrier. I have seen some wonderful work, but a lot of it just makes me feel more alone — which frankly is a feat, given that I live by myself and haven’t hugged another human since March. Theater that contemplates our isolation is the last thing I need right now.

SOLOSKI I may have the opposite problem. I’ve been inside a 600-square-foot apartment with two kids for the duration. As I did pre-pandemic, I look to theater as a kind of escape. I don’t have any use for traditional fourth-wall theater online right now. But in immersive spaces, I’ve felt really seen and welcomed and taken out of myself. I know we both loved the first part of the new 600 Highwaymen piece, “A Thousand Ways.”

COLLINS-HUGHES Yes! It’s startling to so enjoy a phone call that’s just you and a stranger (again, there is no audience, and here no one is even listening in) being guided by an electronic voice that’s following a script. But “A Phone Call” — the start of a triptych-in-progress — is a lovely thing. And it’s delightful to have an ally in the other person so that you can decide whether and how much to follow the automated prompts. How was your call?

SOLOSKI Splendid. Funny and sweet and unexpectedly moving. I was partnered with a Canadian woman, maybe a decade or two older than me. The prompts took us through childhood, family, special skills. (She saved someone’s life once!) I may have cried a bit. I guess the flip side of any work about isolation is that it’s also necessarily about connection — however impossible. Nearly all of us have people in our lives that we can’t be with right now or can never be with again. (I was crying talking about my grandfather, dead for a decade.) Work that somehow takes that on, I have a lot of time for.

COLLINS-HUGHES I did think of that show as being more about connection, and using really simple tools to accomplish theatrical goals. One of the temptations of experimentation is to use every available tool. Pulling back and just giving us the space to listen and respond — asking us to risk nothing physically, because it’s completely distanced, but to be vulnerable emotionally — can be a more satisfying way to go. And voice can be so intimate.

SOLOSKI I’m eager for the second part — and eager for a moment when it can be staged safely — where you meet a different partner one-on-one, in-person. The only screen, I believe, is plexiglass.

COLLINS-HUGHES I’m eager for it, too — so mask up, everyone. There’s live theater to get back to!

A Thousand Ways (Part One): A Phone Call

11/15/2020 Entertainment Comments Off on When the Critic Is Also the Star. And the Audience.
Recent Posts
We and our partners use cookies on this site to improve our service, perform analytics, personalize advertising, measure advertising performance, and remember website preferences.Ok