Megan Fox embarks on an archaeological expedition to uncover the truth behind some of the world’s ancient myths, and aliens face a bleak reality on Earth in the Oscar-nominated “District 9.”

LEGENDS OF THE LOST WITH MEGAN FOX 8 p.m. on Travel Channel. In her new TV show, the star of “Transformers” and “Jennifer’s Body” travels the world in what the network calls an attempt to “uncover answers about the age-old mysteries that still perplex scientists and archaeologists to this day.” The four-part series, which seems to fall somewhere between “Tomb Raider” and the History Channel’s “Ancient Aliens,” follows Fox, a self-described “seeker,” as she treks from Stonehenge to Scandinavia to Turkey. On the premiere, she looks into findings that suggest female warriors fought with the Vikings.

THE PROFIT 10 p.m. on CNBC. Marcus Lemonis starts the sixth season of his business-reality TV series, which focuses on helping struggling small businesses around the country. In the premiere, he heads to NYC Bagel Deli in Chicago to offer input on the company’s branding, though the owner seems hesitant to change. The episode follows a special behind-the-scenes look at Lemonis’s trip to A. Stein Meats in Brooklyn, which shows at 9 p.m. 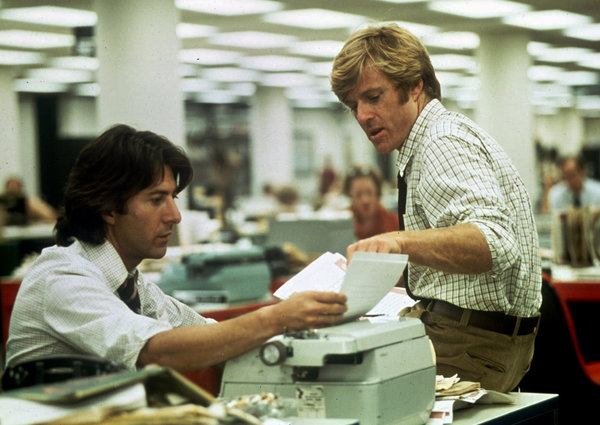 ALL THE PRESIDENT’S MEN (1976) on Amazon Prime, Google Play, iTunes, Vudu and YouTube. Now that Watergate has inspired a new podcast, it’s a good time to revisit this classic film account of the scandal that brought down President Nixon. The film, starring Dustin Hoffman and Robert Redford, won four Academy Awards, one of which went to the screenwriter William Goldman, who died last month.

DISTRICT 9 (2009) on Netflix, Amazon Prime, iTunes, Google Play, Vudu and YouTube. Neill Blomkamp’s Oscar-nominated sci-fi film explores what happens when an advanced alien civilization comes to Earth, only to be forced into an internment camp and subjected to xenophobia. Nearly 10 years after the film’s debut, its allegory remains relevant given the refugee crises. Upon its release, the critic A. O. Scott of The New York Times wrote that “the film’s implications extend far beyond the boundaries of a particular nation, which is taken as more or less representative of the planet as a whole.”

THE VIEW FROM HERE on Topic. In an incredibly candid look at death and mortality, the director Scott Z. Burns spoke to five individuals with terminal illnesses about the process and prospect of dying. Each episode in the documentary series focuses on one subject — Linda, Lee, Brian, David and Sally — as they reflect on their family, faith and what it means to come to terms with a devastating diagnosis. The moving series offers an open and honest conversation about a topic that many still see as taboo, giving those who are dying an opportunity to speak their piece.

Related posts:
12/04/2018 Entertainment Comments Off on What’s on TV Tuesday: ‘Legends of the Lost With Megan Fox’ and ‘District 9’
Recent Posts
We and our partners use cookies on this site to improve our service, perform analytics, personalize advertising, measure advertising performance, and remember website preferences.Ok