“This Is Us” finishes out an emotional season, and George Clooney makes a comeback in “Ocean’s Thirteen.”

THIS IS US 9 p.m. on NBC. This season finale is filled with new beginnings, from Kate (Chrissy Metz) pursuing a new opportunity to Kevin (Justin Hartley) going to Vietnam, where his father, Jack (Milo Ventimiglia), served in the war. Meanwhile, we glimpse into Jack’s past as he tries to get through to his brother. Everyone knows this series is a tear-jerker, so expect no less from the season closer.

COUNTING ON 10 p.m. on TLC. After the cancellation of “19 Kids and Counting,” following revelations that the Duggars’ oldest son, Josh, molested some of his sisters, TLC moved in a different direction with this reality series, which focuses on the adult bunch of the 19 Duggar siblings. This episode takes us back to the beginning of John David and Abbie’s love story just ahead of their wedding. Their nuptials, in front of 1,000 of their friends and family, are set to have several surprises in store. 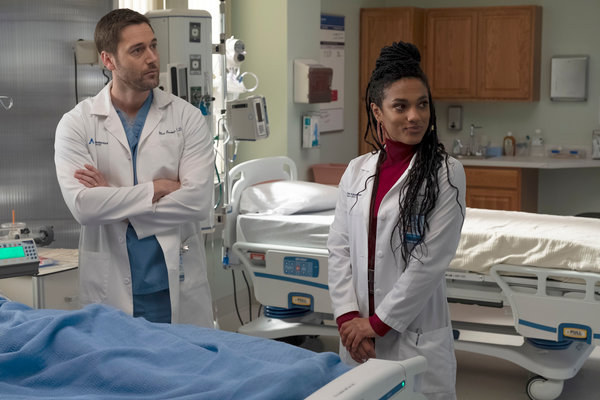 NEW AMSTERDAM 10 p.m. on NBC. This series, based on New York’s own Bellevue, the oldest public hospital in the country, closes out its inaugural season. Dr. Max Goodwin (Ryan Eggold) puts it all on the line to save the transplant recipient of his sister’s heart, while persuading Dr. Helen Sharpe (Freema Agyeman) to take a risk when it comes to his cancer treatment. In his review for The New York Times, James Poniewozik called the show “heartfelt, well meaning” and, well, “dull.”

OCEAN’S THIRTEEN (2007) George Clooney is back as Danny Ocean, and Matt Damon and Brad Pitt return alongside him. In the third installation of the series, Danny returns to Las Vegas to bail out his former mentor Reuben (Elliott Gould) and plot revenge on the man who double-crossed him, Willy Bank (an over-the-top Al Pacino). Danny and his boys hatch a plan that takes a hit at Willy’s finances and reputation to put him on the brink of ruin. This film was a Times Critic’s Pick, and Manohla Dargis praised it for pushing “at the limits of conventional narrative filmmaking” in her review.

THE SPY WHO LOVED ME (1977) It’s Bond. James Bond. And played by Roger Moore in this ’007 thriller. Bond teams up with the Russian agent Anya Amasova (Barbara Bach) in an attempt to defeat Karl Stromberg (Curt Jurgens), a shipping tycoon threatening to destroy New York with an arsenal of nuclear weapons. Expect the textbook formula: fast cars, beautiful women, cool gadgets and stunts galore. In her review for The Times, Janet Maslin commended Moore for being “so enjoyably unflappable that you sometimes have to look closely to make sure he’s still breathing.”