COLLEGE FOOTBALL on ABC, ESPN, CBS, FOX, CBSSN. Top teams will play in championship games this weekend before they’re ranked by the College Football Playoff selection committee. On Saturday, 16 teams will face off for FBS conference titles and, for some, the chance to compete in a semifinal game. Among them, Big 12 rivals Oklahoma and Texas play at noon, No. 1 Alabama will take on No. 4 Georgia in the SEC championship at 4 p.m., and No. 2 Clemson will play Pittsburgh at 8 p.m. for the ACC title.

AMLO: PRESIDENTE DE MEXICO 11 a.m. on Telemundo. Last July, the leftist candidate Andrés Manuel López Obrador was elected in a landslide to become Mexico’s next president. On Saturday, López Obrador (who’s often referred to by his initials AMLO), will be inaugurated in Mexico City. President Trump will not be attending, but Vice President Mike Pence and Ivanka Trump are scheduled to go. The event will be broadcast on Telemundo as well as streamed online and on the channel’s YouTube, Facebook and Twitter accounts.

DISNEY PARKS PRESENTS A 25 DAYS OF CHRISTMAS HOLIDAY PARTY 8 p.m. on Disney Channel. For a family-friendly way to kick off the holiday season, tune into Disney Channel’s half-hour Christmas special, featuring musical performances by Brett Eldredge and Gwen Stefani, as well as some of the latest crew of Disney Channel stars. The singer Jordan Fisher is hosting alongside Ruby Rose Turner and Dakota Lotus of “Coop & Cami Ask the World.” 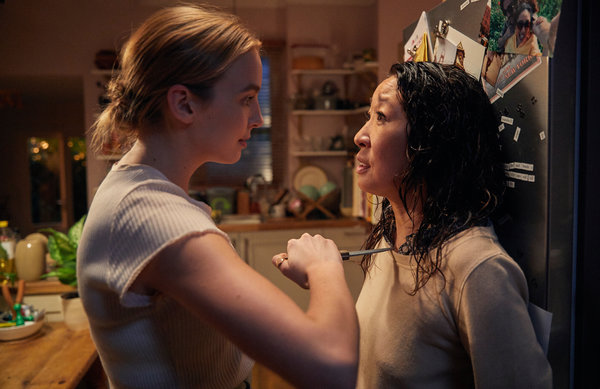 KILLING EVE on Hulu. The subversive spy thriller in which Sandra Oh’s MI6 agent Eve Polastri chased down the assassin Villanelle for eight incredible episodes has been available to stream on BBC America since it aired in April. But now the first season will be available to binge in its entirety on Hulu, as well. The New York Times critic Mike Hale said the series “unspools with the fluidity, narrative finesse and sardonic, dirty humor” that its creator, Phoebe Waller-Bridge, brought to “Fleabag.” Check out this Critic’s Pick before its second season returns next year.

ROLL WITH ME on Netflix. After a devastating car accident in 1992, an aspiring actor, Gabriel Cordell, became a paraplegic. He uses a wheelchair and, by his 30s, was struggling with drug addiction. But in 2013, the 42-year-old attempted an unimaginable physical feat: pushing himself in his wheelchair across the United States, from Santa Monica, Calif., to his hometown — West Hampstead, N.Y. The filmmaker Lisa France tagged along for the roughly 3,100-mile journey to make “Roll With Me,” a documentary about Cordell’s incredible resilience. The film was acquired by Ava DuVernay’s distribution collective Array this year and, after a run in select theaters, hits Netflix days ahead of the United Nations’ International Day of Persons with Disabilities on Dec. 3.