Brother and sister find themselves at the center of devastation in “Manifest,” and watch Jim Carrey do what he does best in “The Mask.”

9-1-1 9 p.m. on Fox. The season finale of this series finds the emergency workers under more stress than usual during the holidays. A stampede at a toy store, a less-than-successful mistletoe stunt and a Christmas-light showdown, which ignites a neighborhood’s competitive edge, create an atmosphere conducive to chaos. On top of it all, Eddie (Ryan Guzman) grapples with whether he’s going to let his son visit his mother, knowing it’s the only thing he truly wants.

MANIFEST 10 p.m. on NBC. Michaela (Melissa Roxburgh) and Ben’s (Josh Dallas) plan to save the other missing passengers goes wrong and lives end up being lost in this season finale. In the wake of the devastation, Ben and Grace (Athena Karkanis) reach a breaking point, while at the other end of the spectrum Michaela and Jared (J.R. Ramirez) are getting far too close. 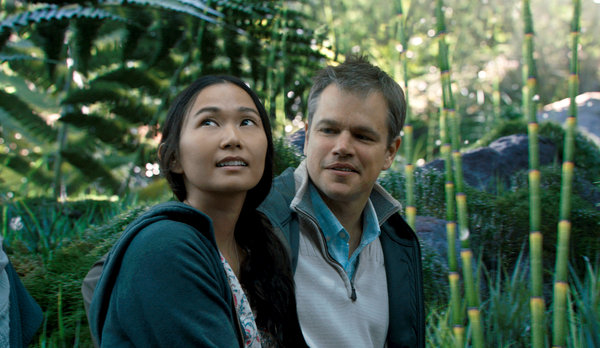 DOWNSIZING (2017) on Amazon, Google Play and Hulu. Paul (Matt Damon) and his wife, Audrey (Kristen Wiig), get the opportunity to ditch their stress-ridden lives. With the help of a monumental scientific discovery, the couple decides to join a growing movement of people choosing to shrink themselves down to five inches. But life on the smaller side is not as expected, and things quickly spiral out of control and throw Paul on an entirely different trajectory than he had anticipated. In his review for The Times, A. O. Scott called the film “an ambitious movie about the value of modesty.”

THE ADVENTURES OF TINTIN (2011) on iTunes, Amazon, Google Play and Vudu. Tap into your childhood daydreams in this animated film by Steven Spielberg, which Manohla Dargis called a “marvel of gee-wizardry and a night’s entertainment that can feel like a lifetime” in her review for The Times. Tintin (Jamie Bell) and his trusty pooch, Snowy, uncover a model ship called the Unicorn that holds a clue about a hidden treasure. A shady scoundrel named Sakharine (Daniel Craig) tries to take the ship from Tintin, but when he refuses, he’s kidnapped and thrown aboard a cargo ship under the command of Captain Haddock (Andy Serkis). From here, Tintin and the captain realize they’re better as a duo than they would be as enemies, and they embark on a journey of their own.

THE MASK (1994) on iTunes, Amazon, Google Play, HBO and Vudu. In this film, Jim Carrey does what Jim Carrey does best; plays the part of a zany, over-the-top source of comedic relief. And although Janet Maslin called the movie itself “astonishingly lazy” in her review for The Times, she lauded Carrey as “bright-eyed, crazily intense, irrepressibly silly.” His character, Stanley Ipkiss, used to be timid and shy until he discovered a mask with magical powers. When Stanley wears it, he becomes an exuberant and confident charmer, which eventually helps him catch the eye of Tina Carlyle (Cameron Diaz). But soon, things go awry.

11/26/2018 Entertainment Comments Off on What’s on TV Monday: ‘Manifest’ and ‘The Mask’
Recent Posts