ROOM 104 11:30 p.m. on HBO. A lot can happen within one set of walls. Created by Mark Duplass and Jay Duplass, this anthology series takes place in a hotel room — with new transient characters and stories appearing with every episode. Fights (verbal and physical), ghosts and dancing all factored into the first season. Many stories took interest in the macabre, but there was a lot of variation between episodes; last year’s set took its hyper-specific, intimate setting and filled it with wild shifts in tone. Those gave the impression that the static nature of the environment had challenged the cast and crew to constantly come up with new ways to vary things. With so much turnover between episodes, jumping right into Friday night’s second-season debut doesn’t require that the viewer have any previous familiarity with the series. This season features episodes with Mahershala Ali, Charlyne Yi, Michael Shannon and other familiar faces. 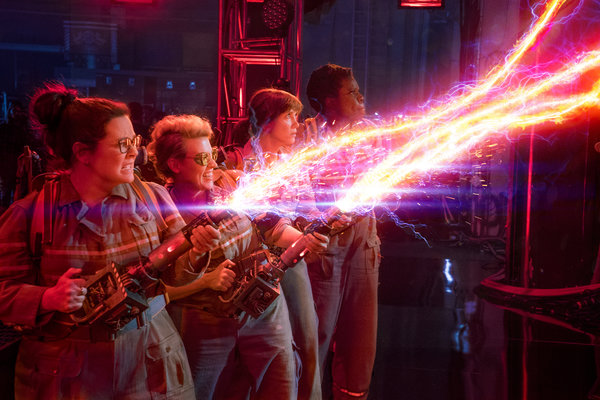 GHOSTBUSTERS (2016) 8 p.m. and 11:30 p.m. on FX. Melissa McCarthy, Kristen Wiig, Leslie Jones and Kate McKinnon took over for the marshmallow monster-fighting male stars of the original “Ghostbusters” in this 2016 remake. Like the original, this comedy concerns itself with an invasion of Manhattan by ghosts, and a calling to arms of a ragtag group of spirit-fighters. In her review for The New York Times, Manohla Dargis called the retelling “at once satisfyingly familiar and satisfyingly different,” making particular note of McKinnon’s performance. “Ms. McKinnon makes for a sublime nerd goddess,” Dargis wrote, adding, “Here, she embodies the new ‘Ghostbusters’ at its best: Girls rule, women are funny, get over it.”

OUTLAW KING (2018) on Netflix. Known in the world of movies for betraying Mel Gibson’s William Wallace in “Braveheart,” the 14th-century Scottish king Robert the Bruce led his country during the First War of Scottish Independence, eventually winning autonomy from England. It’s a story of blood and rebellion, of sound, fury and sword fighting — so it was, of course, destined for adaptation in our post-“Game of Thrones” age. This Netflix feature has brought together an impressive pair of raconteurs in the actor Chris Pine, who plays the king, and the director David Mackenzie (“Hell or High Water,” which Pine also starred in). Florence Pugh (“Lady Macbeth”) plays Elizabeth de Burgh, this king’s consort.

MEDAL OF HONOR on Netflix. This docuseries tells the stories of multiple generations of recipients of the military’s highest personal decoration, including service members who were active in World War II, the Korean War, the Vietnam War and Afghanistan. Through interviews with historians, family members, military leaders and others (and archival footage), the series tells eight stories covering decades but bound by profound acts of courage.