Shepherding a heritage fashion house forward is always a delicate balancing act, but Oscar de la Renta — a man who was as vibrant as his designs, which for many decades were considered the height of American elegance — left an especially vivid legacy. Laura Kim and Fernando Garcia were tasked with upholding it when they were named co-creative directors of de la Renta’s eponymous label in 2016, though by that point they’d already spent a collective 17 years working at the designer’s side. “He wasn’t just our mentor — he was family,” says the Korea-born, Canada-raised Kim, 36, who is from a family of architects and arrived at the house as an intern during her senior year at the Pratt Institute, swiftly rising through the ranks. “Meanwhile, I started as Laura’s lowly intern,” says Garcia, 31. Like de la Renta, who died in 2014, he grew up in the Dominican Republic and didn’t go to fashion school but impressed those around him with his sketches and charm. “We’re pretty much polar opposites,” Kim and Garcia say in unison.

Still, it’s a harmonious pairing: While Garcia sketches, Kim drapes. And though she is the pragmatist to his dreamy romantic, they’re fully aligned in their overall vision for the brand, which reveals a keen awareness of how Instagram and e-commerce have changed the fashion landscape. “We gravitate toward bolder graphic motifs and shoot everything on our phones,” Garcia says. “We’ve kept some Oscarisms,” Kim adds, “but we’re making it all lighter and more relaxed.” That’s translated to embroidered motorcycle jackets, camouflage walking shorts and cropped terry-cloth sweatshirts worn over billowing tulle skirts — and to a younger clientele. “Ultimately, we’re after a joie de vivre that came through in Oscar’s clothes,” says Garcia. “We want to make him proud.” 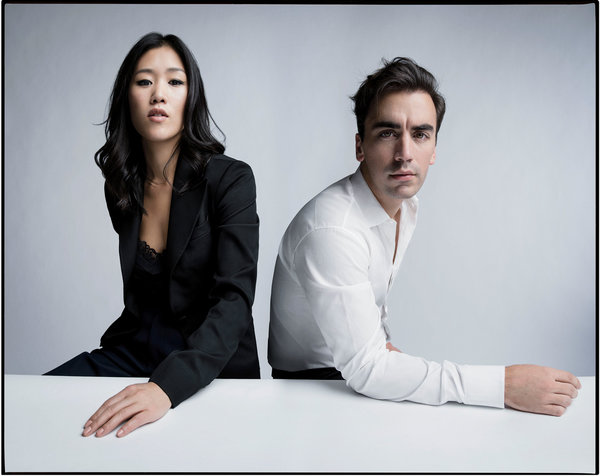 Fernando Garcia: “Tim Walker took this portrait of us in his London studio last October. He is hands down our favorite photographer, and though he shoots all our campaigns, working with him still feels surreal. Our debut collection last year was even inspired by his work, as well as that of Tim Burton. Basically, if your name is Tim, we’re going to love you.”

Left, Laura Kim: “My dad designed a number of residences and office buildings in postwar Korea. He used these rulers from college up until he retired, and he gave them to me when I started at Pratt. They were so clean, and I remember asking, ‘Dad, um, did you not work that hard?’”

Right, LK: “This is one of the watercolors in my paternal great-great-grandfather’s sketchbook, a prized possession of mine. He was a Korean politician and also really involved in the arts community. My mom’s family was in textiles. It was my grandmother who taught me to sew.”

LK: “In January, we’re opening a two-story boutique on Paris’s Rue de Marignan. It’s being designed by my sister, Jeang Kim, who’s also worked on stores for Tom Ford. The idea is to evoke the Madison Avenue flagship, which Oscar designed himself in 2004 — there’s a similar semicircular staircase and green marble detailing [inset] that nods to his love of gardening — while keeping things essentially Parisian.”

Left, FG: “Every summer, I go to Mykonos with my best friend, Marco. We like to visit in June, when the island isn’t terribly crowded. Our go-to hotel is the minimalist San Giorgio.”

Right, FG: “For our first season, we wanted to introduce pieces — like this textured wool-crepe jumpsuit — that our customers didn’t already have in their closets. Emma Watson wore the piece to the premiere of ‘Beauty and the Beast,’ and then we made a scarlet version for Zoë Kravitz. We added the brooch because the gardenia was Oscar’s favorite flower.”

FG: “Oscar attended Truman Capote’s Black and White Ball in 1966 with his future first wife, the fashion editor Françoise de Langlade — they went as cats! The picture is a reminder of how Oscar made it his mission to truly enjoy life. Almost every afternoon, he would ballroom dance around the office.”

Left, LK: “Using an iPhone app called Doodle Buddy, we make little animal cartoons for one another. It started as a way to cheer each other up on tough days. Three years ago, Fernando began compiling our drawings into these little books, about the adventures of Dog (Fernando) and Bunny (me). One day, we want to write a children’s book.”

Right, FG: “An exuberant mini-me at Disney World in the mid-1990s. My family and I are obsessed with Walt Disney and used to go all the time when I was a kid. I was a child model for Jacadi at the time, which my C.E.O., Alex Bolen, teases me about, but, despite his attempts at blackmail, nobody will ever see those pictures.”

Left, FG: “When we were working on the fashion entrepreneur Lauren Santo Domingo’s dress for the 2014 Met Ball, the bow that came from the atelier wasn’t big enough for Oscar’s liking, so he said, ‘Fernando, grab me that bolt of fabric!’ and whipped this one up on the spot.”

Center, FG: “A few months before the royal wedding, Meghan Markle called to ask if we’d be interested in designing her mother’s dress. She really wanted to have an American brand represented. So we flew to Los Angeles to meet with her mother, Doria Ragland, who was so sweet and even brought us snacks. We landed on a pistachio-colored ensemble with white silk embroidery — a look inspired by the work of Josiah Wedgwood.”

Right, LK: “We both live in TriBeCa and often go up to Tartine in the West Village, where Fernando, especially, is a regular. He loves their eggs Benedict.”

LK: “I’m the shorter one, and that’s my sister, Jeang, on the right. This was taken while we were on a road trip with our parents somewhere in South Korea. We moved to Calgary a few years later, when I was nine.”

LK: “We’re equally obsessed with Matisse, and so was Oscar. He used to say that there’s a light in his paintings, and that’s something we still think about. We wish we owned this cutout — ‘Composition, Violet and Blue’ (1947) — but they don’t pay us that much!" 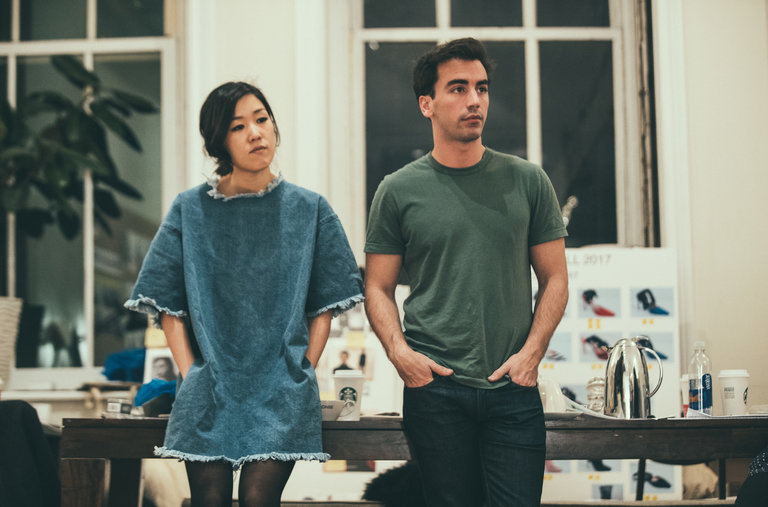