Tessa Thompson is more hopeful about the future than many of us are. The Westworld star is one of the faces of Absolut’s ‘It’s in our spirit’ campaign, which is bringing progressive voices from around the world together to have meaningful conversations to spark change. Change has indeed been sparked this year, and Thompson couldn’t be more inspired by it nor proud to be part of it.

“I think it’s been such an incredible year, in this country in particular. It’s been a year of real reckoning,” she told SheKnows exclusively. “And personally, it’s been a year of introspection. It has not come without its complications, but there have been many silver linings.”

Thompson, who joined other artists, including MNEK, Jolin Tsai, Ricki Ortiz, for the campaign, says she “loves being part of a global collective to illuminate the ways, when it’s safe to come together, in which having real life conversations is actually a tool to spark cultural change. I believe that political change is preceded by cultural change.”

Thompson talked to SheKnows about the campaign, why she’s so hopeful about cultural change in our country, and how thinking about diversity in television and movies is simply not enough. Keep reading! 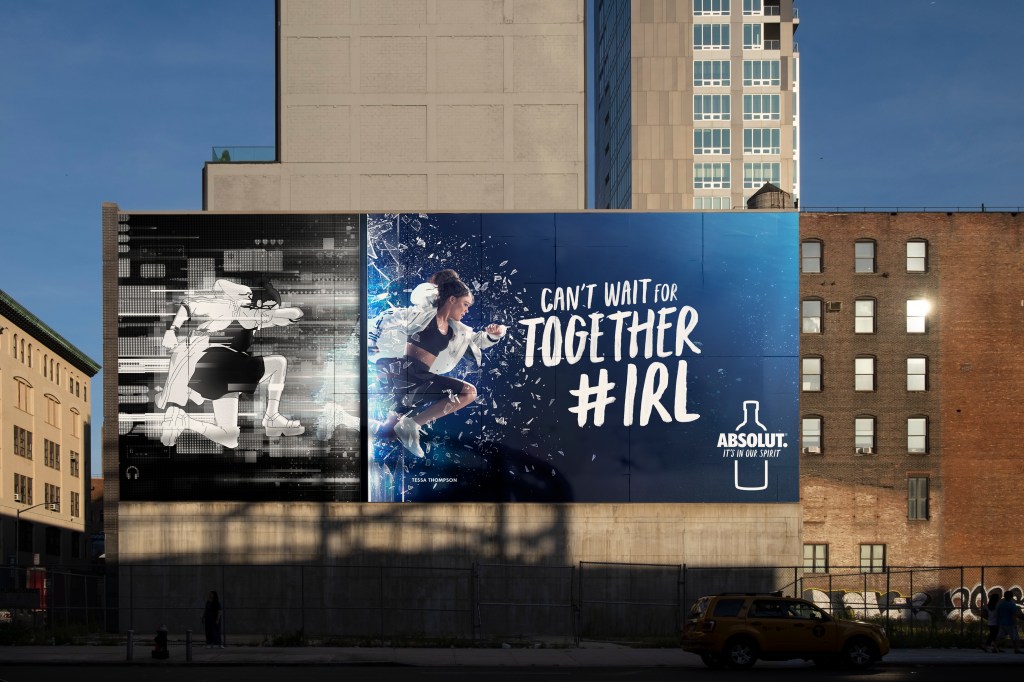 Her younger brother & TikTok give her hope for the future

Like many of us, Thompson says one of the silver linings of this difficult time in our country has been getting to spend time with her family — and  it’s shown her that she needs to be more present in her loved ones’ lives, even when she’s working. Also like many of us, she’s learned how to use Zoom, and she even has a ring light.

“Another silver lining has been getting to see my little brother, who’s 22, really be radicalized at this time,” she says, adding that she learned from Absolut’s research that 90 percent of her brother’s generation is willing to make a personal sacrifice to make the world a better place and to make it more equal and inclusive. “That’s something that I’ve been able to see firsthand with my brother,” she says. “We went from protesting together over the summer to more recently protesting while dropping our ballots off at the ballot box. And I think being able to really normalize being civically engaged is something that I see his generation doing with such grace and vigor. And it has made me really, really hopeful.”

Somewhat surprisingly, social media has also been a place of inspiration for her. While she admits it’s a space that can be very lonely, it’s also a place she sees people coming together, and she’s learned a lot on Instagram and other online spaces, like TikTok, just by watching people have meaningful conversations. “They’re really a generation that is primed to really be the change makers,” she continues. “And so it’s really inspiring to learn that so many of them, just in this year alone, have become so much more globally aware, conscious and activated.”  Thompson points out that BTS has fans that are activists and disruptors, “It’s incredible to see communities organizing like this.” Who knew in the end TikTok would save us all?

Beyond protesting, Thompson was part of the #GoodToVote campaign, which worked to make sure people were registered to vote; she also did a voter action campaign with Dave Matthews.

Why she wears red lipstick when she’s home alone…

When asked what she missed the most from the pre-Covid world — pants? Hugs? — she laughs, “I’m wearing pants right now, so I don’t miss that.” But what she hadn’t been doing at the beginning of quarantine, and has started doing again, is wearing red lipstick. “There’s no reason I need to be, but I’m wearing red lipstick right now,” she tells us. She’s trying to do the things she used to do. “I’ll dance on my own or make myself a cocktail, albeit not a great one, because I’m not that good at it.”

Dirty martini with a twist, please…

Another thing Thompson misses is the way she used to casually connect with strangers, whether it was asking for directions or sitting on a park bench, chatting with a stranger. In fact, it’s one her favorite things about New York City — those moments of connection that help everyone feel less alone. Until that returns, it’s red lipstick on Zooms and dancing alone for her.

But about that cocktail… When asked what her Covid cocktail of choice is (I instantly regretted it calling it that), she didn’t miss a beat. “An extra-cold Absolut martini with a twist. And sometimes, I don’t know if this is sacrilege, but I do a dirty martini with a twist. I don’t know if you’re supposed to do that, but I do that.” Hey, it’s 2020, we can do whatever we want.

Bath time is the busiest time….

While many of us are dreaming of just having a chair to sit down in the shower from this exhausting year — oh, is that only me wanting that? —Thompson said bath time is actually her most productive time. She calls it “bath multi-tasking” and honestly, we’re into it. Turns out, she likes to get things done in the bath — to-do lists and Zoom meetings. Yep, Zoom meetings amidst the bubbles. She reveals she had one Zoom blunder, where she was muted almost the whole time. “I nearly activated my camera… But I will not stop doing bath multi-tasking.” Next up is a waterproof kindle so she can read. She can’t stop, won’t stop. Bathing.

“I’ll be honest, it’s been really hard,” she says of this year and the re-invigoration of the movement in the wake of George Floyd’s murder. “It’s endless, but something I think has been really impactful is… being able to re-imagine these systems.” But what she finds most inspiring is her brother’s generation. Gen Z, as the kids call it. (The kids don’t call it that, adults do). “They have the ability to radically re-imagine these systems, because they don’t believe in them as much as (we) do. Having a more equitable, inclusive world doesn’t feel crazy to them, as opposed to people who have been around longer might think, ‘Whoa these systems are too massive to dismantle.’ And I think if you ask someone like my little brother, he’s like, ‘Why not? These systems don’t work anyways.’”

Changes in the TV & film industries

And given the changes our country has seen in the last few months, with respect to Black Lives Matter and representation, has Thompson seen any changes in her industry, specifically behind the scenes on the shows and movies she works on? It’s too early to tell, she says, since they haven’t been able to get back to work yet. She notes that streaming platforms are now showcasing Black stories, but says, “it’s not enough to just think about diversity.” She hopes Hollywood will “create a space where we can tell more of our own stories and have more ownership over those stories.” She’s also feeling more empowered “to tell my own story, to tell my own truth, and to and to really think about the ways at a time when we’re talking about the value and dignity of Black life and celebrate by …telling our stories in whatever way we want to tell them. So I feel emboldened in a new way.”

Is she at all worried that this reckoning and the changes might stop and just be forgotten? Simply put, no. “I don’t have that worry. It’s not a moment, it’s movement, and like any movement, there are changes. There are evolutions and devolutions.” Most of all, she says, it’s started conversations that people just aren’t going to stop having now. And with multi-tasking baths, her brother’s generation’s, a little red lipstick, and a martini with a twist, things are looking brighter already.

Before you go, check out these women who made TV & film history: