VIENNA — Wes Anderson looked tired. The filmmaker was wearing a red blazer and a striped tie, standing beneath the elaborate 19th-century cupola of the Kunsthistorisches Museum. His partner, the author and designer Juman Malouf, was by his side.

Dozens of friends — the actors Tilda Swinton and Jason Schwartzman; the filmmaker Jake Paltrow; and a pair of lesser-known Coppolas among them — stood around him. Photographers jostled for angles.

It wasn’t a movie premiere, but the exhibition opening for “Spitzmaus Mummy in a Coffin and Other Treasures,” which Mr. Anderson and Ms. Malouf curated, certainly had the air of one.

Mr. Anderson and Ms. Malouf were asked to put the show together from objects in the collection of the Kunsthistorisches Museum, Austria’s largest. When Mr. Anderson stepped up to the microphone on Monday to address the guests, it was with the weariness of someone who had gone to battle and come back changed.

His speech was short. “It was probably worth it,” he said, only somewhat jokingly, of the effort it took to curate the exhibition. 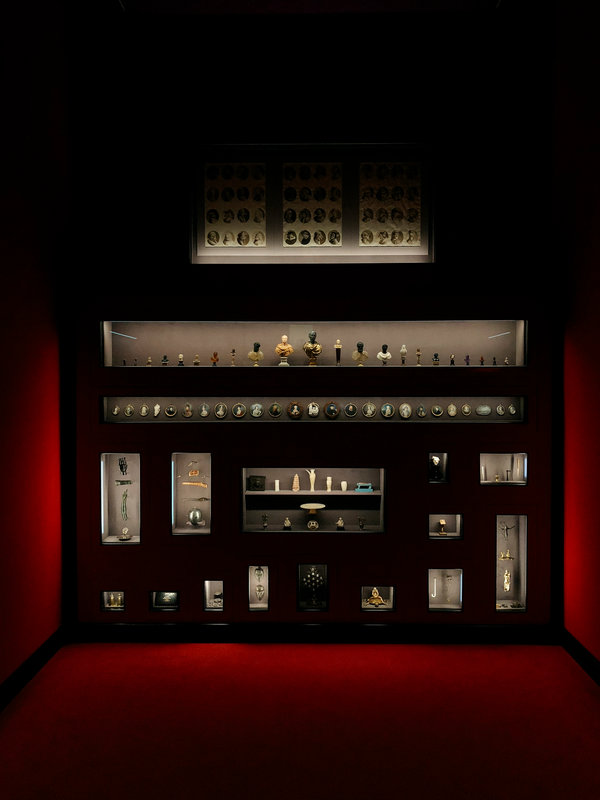 In his own speech, Jasper Sharp, the museum’s curator of modern and contemporary art, said putting the show together felt at times “like we were in some kind of insane Japanese game show.”

From the start, Mr. Anderson and Ms. Malouf had grand aspirations: Mr. Anderson wrote in the exhibition catalog that he hoped the show might unlock some new way of seeing not just the museum’s collection, but also “the study of art and antiquity.”

After digging through 4.5 million works — most of which are stored in a warehouse near Vienna’s airport — Mr. Anderson and Ms. Malouf, who speak little German, created a purely visual show. For the most part, they were interested neither in the provenance or rarity of a piece, nor whether it was the best example of its school or style. Rather, they grouped about 450 objects by color, material and size, in a way that reflected many of Mr. Anderson’s cinematic tricks.

Unexpected challenges quickly sprung up. Things a non-curator would understandably never think about, like the humidity requirements for displaying certain works, or what materials must be used for displays, became stymieing factors. A project that was meant to take two and a half weeks took closer to two and a half years, Mr. Sharp said. “This was an incredible headache for them,” he added.

The show opens with a 17th-century painting by Frans Francken the Younger, in which the artist depicts a “Kunstkammer” — his own collection of sculptures, landscapes, portraits and coins. The implication is clear: This exhibition is Mr. Anderson and Ms. Malouf’s own cabinet of curiosities.

It’s also a show full of puzzles and jokes. In one room containing various boxes and containers — including Austrian military chests, German flute cases, and religious containers for crucifixes and scepters — a long museum display case is empty, as an object in its own right. (“A ‘conceptual vitrine,’ ” Mr. Sharp said in an interview.)

In a wood-paneled room, Mr. Anderson and Ms. Malouf have placed a piece of petrified wood that Mr. Sharp estimated was nearly a million years old beneath a painting on maple that partly depicts a piece of wood. These were juxtaposed with a whittled wooden sculpture. A material becomes a lens on the evolution of art — from the functional and artless, to the artful pretending toward authenticity, to the decadently useless.

But these puzzles often appear to be either lacking significance, or so surface-level as to be pointless. A room filled with portraits of children dressed as royalty or clergy, which also includes a darkly comical child-size suit of armor, is funny and nostalgic, but its significance stops there.

In both Mr. Anderson’s films — many of which deal with the imagination of children — and Ms. Malouf’s young-adult novel, “The Trilogy of Two,” the artists manipulate feelings by controlling the characters they created. But in an exhibition, they can handle only existing artworks that have their own histories.

Ms. Malouf, who co-founded the cult fashion label Charlotte Corday, is an exceptional designer in her own right, but it is Mr. Anderson who is more often recognized for a distinct aesthetic. His work has been copied, beloved and aspired to in equal measure (see the popular “Accidentally Wes Anderson” Instagram account). Curation might seem like an easy shift for Mr. Anderson. You could say that his movies are themselves curatorial acts, assembling objects and sets that draw attention to themselves, rather than blending in.

But Mr. Anderson’s onscreen aesthetic is all about creating narratives and moods — of yearning, of melancholy, of passion. Art curation is a fundamentally different pursuit. Unlike a director moving actors around a set, a museum curator cannot dictate how the works will make a viewer feel. Mr. Anderson and Ms. Malouf seem not have realized this.

It is only when Mr. Anderson and Ms. Malouf give up any attempt of mood-making or meaning-finding that the exhibition becomes moving. In a room full of green objects — an emerald, a cigarette case, feathers, bowls, a dress from an Ibsen play, a painting of Salome carrying the head of John the Baptist on a platter — the green appears as so rare and so beautiful that, for a moment, the aesthetic is all that matters.

The 17th-century emerald cut with gold and enamel appears, as Mr. Sharp said, to be “the pot into which the brush was dipped to paint every other object.” And while Mr. Anderson was perhaps stretching it when he wrote in the catalog that the emerald’s placement helps to “call attention to the molecular similarities between hexagonal crystal and Shantung silk” in a nearby dress, this “green room” is the only area in the exhibition that plays no games of mood or feeling. It is the only room in which Mr. Anderson and Ms. Malouf have decided they could not fully control the objects — that, unlike in movies or novels, the aesthetic has to stand on its own.

At the opening on Monday, after the American ambassador to Austria praised the exhibition as “delicious” and the Austrian culture minister gave a few blustering remarks, Mr. Anderson and Ms. Malouf made their way down the museum’s marble staircase.

As Mr. Anderson tried to escape the throngs of autograph and selfie-seekers, I asked him if he’d ever do something like this again. He laughed and touched his hair. “Well …,” he said, and left it at that.

It makes sense that he would feel tired and disillusioned. He and Ms. Malouf entered an impossible battle with little armor. To strip works of their titles, history and scholarship and place them into a purely visual context with the hope that they might retain emotional significance was always going to be a challenge.

The desire to flatten and redefine works that were already bursting with their own histories made the show feel like the “Accidentally Wes Anderson” Instagram account: It had Mr. Anderson’s surface-level aesthetic, but none of the underlying narrative or emotion of his movies.

It also felt a bit like the opening evening: overstretched, overwrought and ultimately as hollow as that empty vitrine. 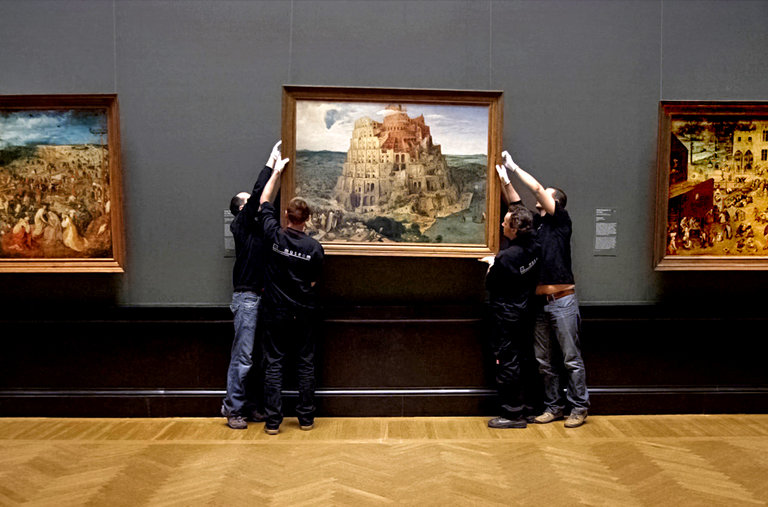 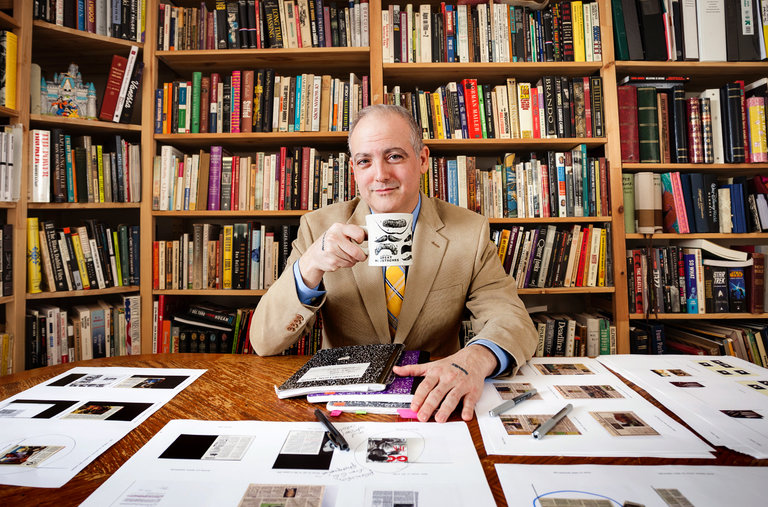 11/07/2018 Entertainment Comments Off on Wes Anderson, Curator? The Filmmaker Gives It a Try
Recent Posts