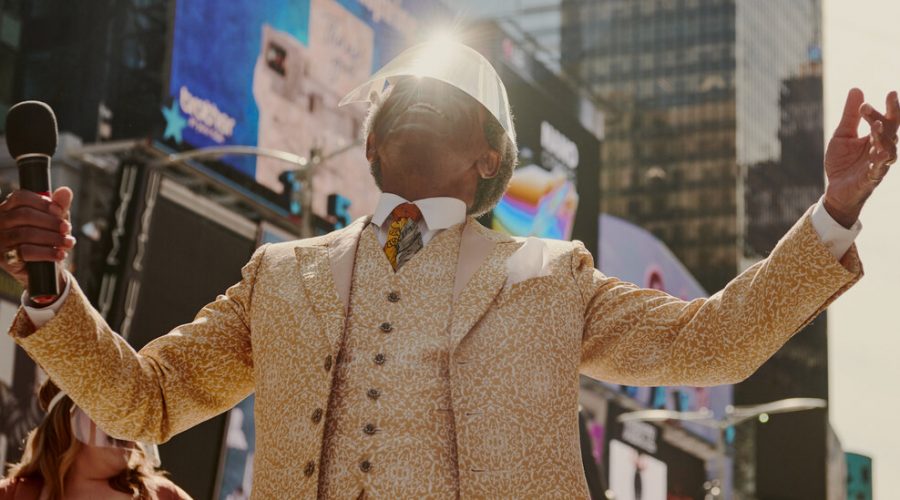 One year ago, the grim news that Broadway was shutting down was sweeping through the theater district. Performers were packing up their things and heading home; theater staff were stationed in lobbies to intercept ticket holders and explain to them that the show was canceled.

As a return date was pushed further and further, performers and theater staff resigned themselves to finding work elsewhere.

But on Friday, the anniversary of the day their beloved industry shut its doors, Broadway singers, dancers, actors and front-of-house staffers gathered in Times Square, just across from the TKTS discount ticket booth, to perform live for a small audience of industry insiders and passers-by. 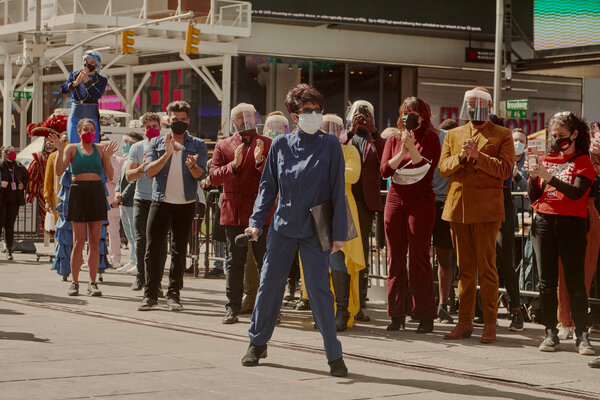 The pop-up show was part concert, part rally. The Broadway legend Chita Rivera spoke about the power of theater to heal a beleaguered society, and then André De Shields, decked out in a glittering gold suit and a transparent face shield, sang the opening song from “Pippin” along with an array of Broadway stars, backup singers and dancers.

“I’m just happy that we’re all trying to remind the world that we’re still here, and we will be back,” said Bre Jackson, a singer who belted out a solo in the “Pippin” number.

One year ago, Jackson, 29, was returning to New York from a national tour of “The Book of Mormon,” and preparing herself for five auditions. Within 12 hours, she said, the auditions were all canceled, and suddenly she was thrust into a job market without much need for professional singers and actors. Jackson eventually found work as an office manager for a therapy practice, finding performing gigs every so often.

One of the main purposes of these pop-up performances — of which there have been dozens across the city — is to provide paying gigs for people in the industry who have lost their entire incomes during the pandemic, said Blake Ross, one of the event’s producers. The performance was funded by a collection of organizations, including the nonprofits Broadway Cares/Equity Fights AIDS and NYCNext.

Although they aren’t likely to perform inside theaters again until after Labor Day, the message of the show was that the end of the industry’s nightmare seemed to be getting closer. Last night, President Biden asked states to make all adults eligible to be vaccinated by May 1, a hopeful sign that shows might be able to start rehearsals over the summer.

The performance landed on one of the first warm springlike days of the year in New York City, adding a jolt of excitement. It felt like a reunion of sorts: After a long time working from home, some people shrieked when they saw each other, keeping their distance, but air-hugging or elbow-bumping. To make sure that crowds didn’t form in Father Duffy Square, the event planners made no public announcement of the performance, but passers-by gathered on the edges of the makeshift stage and stood on elevated surfaces to get better views.

The cast started with a topical classic, George Benson’s “On Broadway,” with a group of high-energy sneaker-clad and masked backup dancers. (There had been barely any time to rehearse beforehand, so just before showtime, the dancers ran through their choreography just offstage on the concrete.) Next, the singers Lillias White, Nikki M. James, Peppermint and Solea Pfeiffer joined in “Home” from “The Wiz.” And a choir sang an original song written about the pandemic hiatus, “We Will Be Back,” by Allen René Louis. Costumes from shows like “Wicked” and “Phantom of the Opera” lined the stage edges, glittering and gleaming on mannequins.

During the pandemic, two musicals, “Mean Girls” and “Frozen,” announced that they would not be returning to Broadway, as well as two plays that were in previews, Martin McDonagh’s “Hangmen” and a revival of Edward Albee’s “Who’s Afraid of Virginia Woolf?” On Friday, several shows promised that they would indeed be back, including “Mrs. Doubtfire,” which got through three performances before it was forced to close, and “Six,” which had been scheduled to open on March 12, 2020.

That day, Judi Wilfore, the house manager for the Imperial Theater, remembers standing in the lobby before the scheduled evening performance of “Ain’t Too Proud” and breaking the news to ticketholders. Even though Broadway shut down on a Thursday, Wilfore came to work that weekend, too, in case any audience members showed up.

Over the summer, Wilfore decided that she needed to find work elsewhere, so she took an online course at Health Education Services, to get certified as a Covid compliance officer. At Friday’s event in Times Square, it was her job to make sure people were following safety guidelines and to manage a team of front-of-house theater staffers who were hired to help run the event.

Wilfore has been a compliance officer for gigs here and there — including the load-out of the “Beetlejuice” set from the Winter Garden Theater — but like many in the industry, she yearns for the eventual return to indoor theater, where she oversaw the bustling movements of staffers and audience members.

“We love what we do,” she said, “and the fact that we haven’t been able to do it in a year is unfathomable.”

03/12/2021 Entertainment Comments Off on ‘We’ll Be Back,’ Broadway Says, on Shutdown Anniversary
Recent Posts