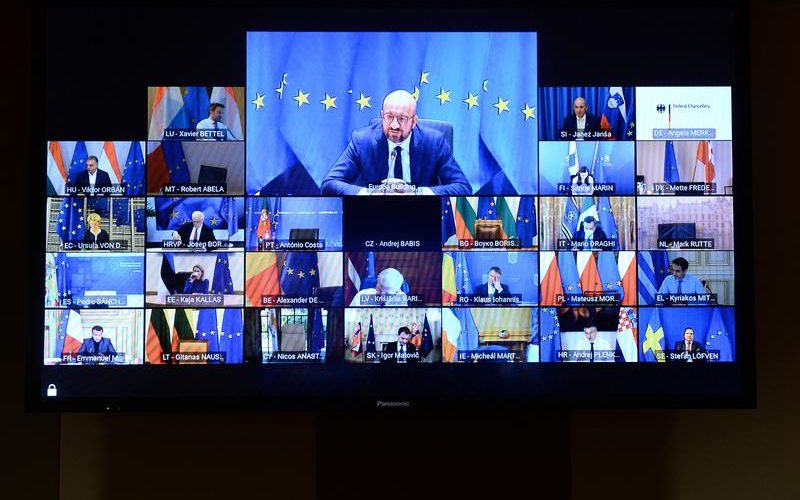 BRUSSELS (Reuters) – European Union leaders met on Thursday to navigate a common path out of the COVID-19 pandemic as infections surge in many of their countries, seeking agreement on how to ramp up supplies of vaccines after a slow start to immunisations.

With distribution of shots uneven across the bloc and member states divided over whether to take a tougher line on vaccine exports, French President Emmanuel Macron spelt out the frustration over inoculation programmes that are running far behind those of Britain and the United States.

“We didn’t shoot for the stars. That should be a lesson for all of us. We were wrong to lack ambition, to lack the madness, I would say, to say: It’s possible, let’s do it,” he told Greek television channel ERT ahead of the summit.

As of March 23, Britain had administered nearly 46 vaccines for every 100 people, compared with under 14 per 100 in the 27-nation bloc it left last year, according to figures compiled by website Our World In Data.

Europe’s rollout, beset with administrative and logistical delays, has led to a quarrel with Britain, which has imported at least 11 million doses made in the EU. Britain says it did a better job negotiating with manufacturers and arranging supply chains. The EU says it should share more.

German Chancellor Angela Merkel, under pressure at home after making a U-turn on plans for an extended Easter holiday to break a third wave of COVID-19, defended the EU’s decision to procure vaccines jointly for all member states.

“Now that we see that even small differences in the distribution of vaccines cause big discussions, I would not like to imagine if some member states had vaccines and others did not,” she told German lawmakers ahead of the summit. “That would shake the internal market to its core.”

Several countries have complained that vaccines are not being distributed equitably, which Austrian Chancellor Sebastian Kurz warned on Thursday could cause the bloc great harm if it was not rectified.

European Parliament president David Sassoli, who spoke to the leaders at the start of the meeting, said it was vital for the bloc to remain united.

“We need trust, and we need to stick together, and be properly organised,” he told a news conference.

The EU’s executive unveiled plans on Wednesday to tighten oversight of vaccine exports that would allow greater scope to block shipments to countries with higher inoculation rates.

Despite that, Brussels and London sought to cool their tensions on Wednesday, declaring in a joint statement that they were working “to create a win-win situation and expand vaccine supply for all our citizens”.

Although the Commission’s proposal on vaccine exports will be discussed at the summit, it is not likely to be explicitly endorsed. Several countries – including Belgium the Netherlands, Ireland, Sweden and Denmark – have reservations.

“If we need to have this because one supplier is not delivering then I hope this is a stick which does not have to be used because it might turn out to be a lose-lose,” said one EU diplomat.

Commission President Ursula von der Leyen said in a tweet she had briefed leaders, with slides showing the global spread of destinations of 77 million vaccine doses shipped from EU plants since the start of December.

She also said the bloc should sharply increase vaccinations given 360 million doses were scheduled for delivery in the second quarter, up from 100 million in the first.

A draft of the summit conclusions seen by Reuters said on vaccines that leaders would stress “the importance of … export authorisations”, and reaffirm that vaccine producers must be respect contractual delivery deadlines.

However, diplomats said countries with misgivings about a tougher stand on exports would not put up strong resistance.

“Their message is … please act very cautiously, in a very balanced way,” said one EU diplomat. “But there is nobody who says don’t do it.”

U.S. President Joe Biden will join the leaders briefly at around 1945 GMT, with the pandemic and the warming of transatlantic relations that soured under former President Donald Trump on the agenda, EU officials said.