“Listen, the guy got a Purple Heart from the United States in service to this country. I’m not gonna question his loyalty to our country.” 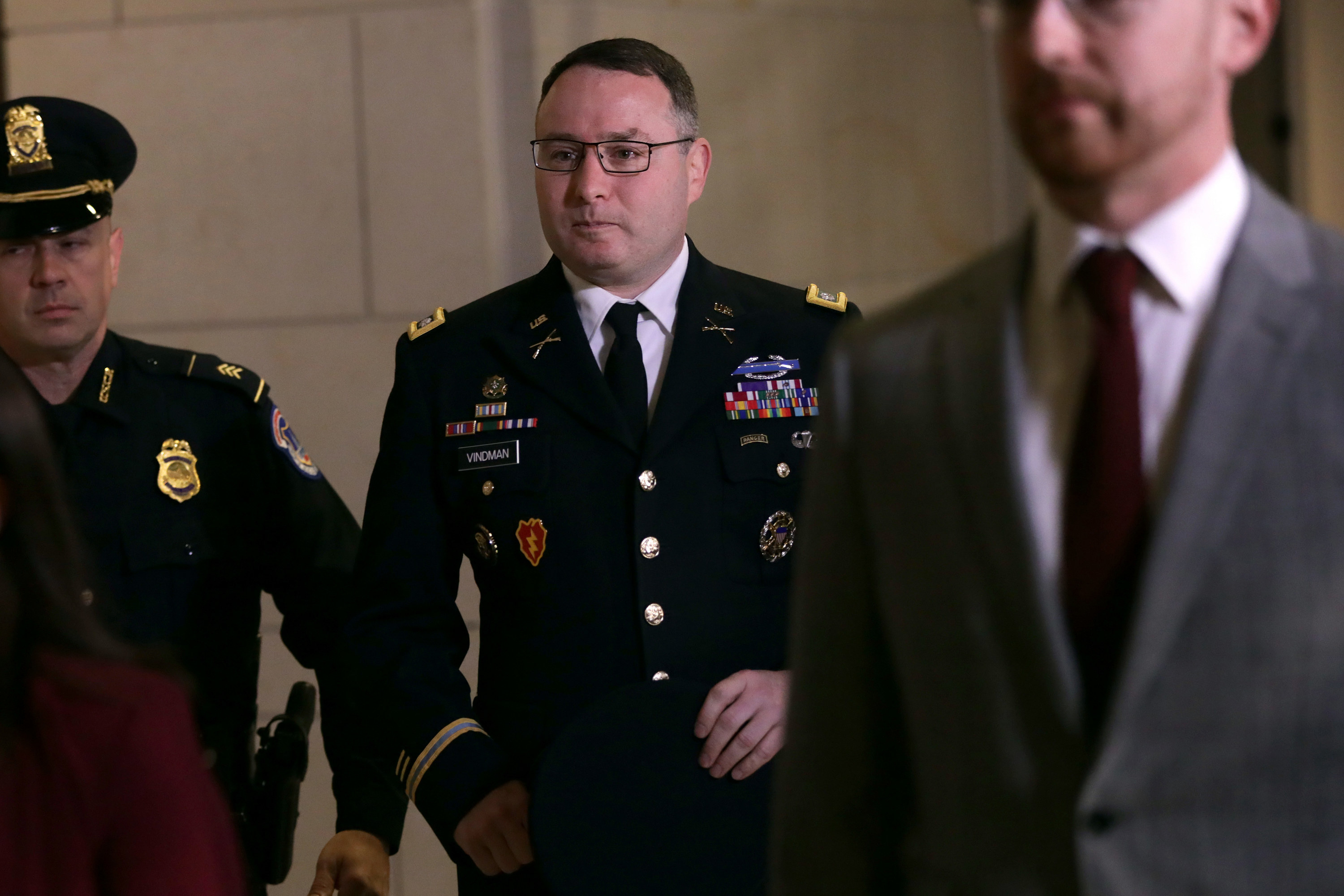 WASHINGTON — In the hours before Alexander Vindman was deposed, it seemed like the Republican attack line was coming together on cable news.

On her Fox News show Monday night, Laura Ingraham noted Vindman — a decorated lieutenant colonel and Ukraine expert who sits on the White House National Security Council — came to the United States from Ukraine as a child and speaks both Ukrainian and Russian.

“Here we have a U.S. national security official who is advising Ukraine, while working inside the White House, apparently against the president’s interest, and usually, they spoke in English. Isn’t that kind of an interesting angle on this story?” Laura Ingraham asked with a laugh.

Sean Duffy, the former Real World cast member turned former member of Congress,made a similar argument Tuesday morning, saying on CNN that Vindman likely has “an affinity to” Ukraine since he was from there .

But House Republicans, who have been quick to side with Trump on seemingly endless topics, don’t even want to touch the argument some of his allies have made.

“Listen, the guy got a Purple Heart from the United States in service to this country,” Rep. Mark Meadows, who sits on the Oversight and Foreign Affairs committees, said Tuesday afternoon. “I’m not gonna question his loyalty to our country.”

“I think it is shameful … questioning the patriotism, questioning the dedication to country, of people like Mr. Vindman — Lieutenant Colonel Vindman — who will be coming today and others who have testified,” she said. “We’re talking about decorated veterans who have served this nation, who have put their lives on the line.”

Cheney went on to say she believes Republicans need to make sure they’re abiding by and upholding the constitution, before adding, “Just because the Democrats refuse to do so, that does not mean that we ought to let ourselves be dragged down to the level at which they are operating.”

Vindman’s opening statement was leaked ahead of the deposition Tuesday. According to the transcript, Vindman told Congress that he was on the call in which Trump asked Ukrainian President Volodymyr Zelensky to investigate the Biden family and was so disturbed by it that he reported it to a superior.

“I did not think it was proper to demand that a foreign government investigate a U.S. citizen, and I was worried about the implications for the U.S. government’s support of Ukraine,” the statement says. “I realized that if Ukraine pursued an investigation into the Bidens and Burisma it would likely be interpreted as a partisan play which would undoubtedly result in Ukraine losing the bipartisan support it has thus far maintained.”

By Tuesday afternoon, Yoo and Duffy were backing away from their earlier remarks.

“I did not accuse Lt. Col. Vindman of committing the crime of espionage,” Yoo said in a statement to The Washington Examiner. “I have tremendous respect for a decorated officer of the U.S Army and a veteran of the wars in Iraq and Afghanistan. What I was addressing was a report that Ukrainian officials had sought to contact Vindaman for advice on how to handle Rudy Giuliani acting as a presidential envoy. I meant to say that this sounded like an espionage operation by the Ukrainians.”

Duffy, for his part, wrote on Twitter, “Lt. Col. Vindman is an American war hero. As I said clearly this morning on air ‘I salute Mr. Vindman’s service.’ My point is that Mr. Vindman is an unelected advisor, he gives ADVICE. President Trump sets the policy.”

And while some of their colleagues praised Vindman’s service Tuesday, other Republicans simply refused to talk about it.

“I don’t answer any questions,” Rep. Devin Nunes, the ranking member on the Intelligence Committee, said before BuzzFeed News could even ask. “On any subject at any time.”

And Rep. Rob Bishop said he didn’t know enough to respond to the attacks on Vindman.

“I don’t know enough about the details to know whether that’s a shot in the dark or not,” he said. “I’m sorry, you deserve a better answer. Anything I would say other than that is, I’m just making it up off the top of my head and I don’t know what the hell I’m talking about.”

Related posts:
10/29/2019 Entertainment Comments Off on Trump Allies Attacked A Decorated Veteran Who Flagged Trump's Call With Ukraine, But Even House Republicans Won't Go There
Recent Posts
We and our partners use cookies on this site to improve our service, perform analytics, personalize advertising, measure advertising performance, and remember website preferences.Ok