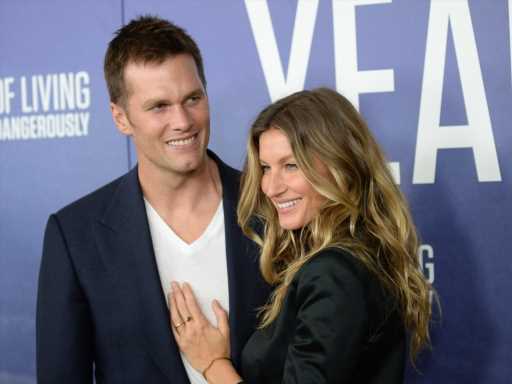 Tom Brady and Gisele Bündchen have always been a united front, so this latest turn in the marriage has everyone scrambling to read the headlines. Even though we’ve seen some minimal social media support from the supermodel for the start of her husband’s football season, it’s reportedly a bit rougher behind the scenes.

The couple has not been spotted in the same city as of late — Brady is in Tampa with his team and Bündchen was last seen in Miami. Now, a CNN source is confirming that the duo is currently “living separately.” They just aren’t seeing eye to eye (at all) about the athlete’s decision to unretire because the domestic burden is then placed on the 42-year-old supermodel. She loves being a mom to their two kids, Benjamin, 12, and Vivian, 9, along with Brady’s 15-year-old son Jack, from his relationship with Bridget Moynahan, but she has career goals she wants to accomplish too.

Bündchen probably thought she was about to embark on the next stage of her career, and now, that’s on hold because her husband decided he needed one more season on the football field. “I’ve done my part, which is [to] be there for [Tom]. I moved to Boston, and I focused on creating a cocoon and a loving environment for my children to grow up in and to be there supporting him and his dreams,” she told ELLE. “I have a huge list of things that I have to do, that I want to do,” Bündchen added. “At 42, I feel more connected with my purpose.”

The crazy part of their “marital issues” is that Brady understands how his wife feels and discussed it this week on his Let’s Go podcast. “I haven’t had a Christmas in 23 years, and I haven’t had a Thanksgiving in 23 years, I haven’t celebrated birthdays with people that I care about that are born from August to late January. And I’m not able to be at funerals and I’m not able to be at weddings,” he explained to co-host Jim Gray. “I think there comes a point in your life where you say: ‘You know what? I’ve had my fill and it’s enough and time to go on, to move into other parts of life.’” Even though he grasps this concept, he still chose to get out there one more time and play — a decision that could possibly cost him his marriage to Bündchen.

Before you go, click here to see more famous football families we love.