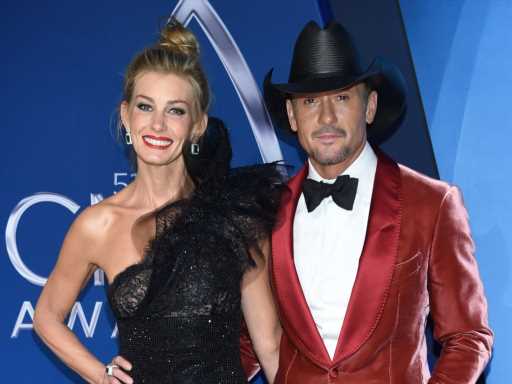 You know that cliché “good things come to those who wait?” Well, you might be hard pressed to find two people who believe that more than Tim McGraw and President Joe Biden. Among the few things that these men have in common, the number of times they proposed to their wives is probably the most unique. And on McGraw and Faith Hill’s 25th wedding anniversary, the country singer revealed how Hill finally said yes after she said no “quite a few times.”

“We had dated for a while. I actually asked her to marry me quite a few times and she kept saying no,” McGraw recalled during his Instagram video. “She said, ‘I’m not going to get involved with another country singer, it’s just not going to work out.’”

While Hill was hesitant about marrying McGraw, that didn’t stop him from trying. Right before McGraw was about to play at an outdoor concert, he asked her once again. “They had these trailer houses set up. I’m getting ready to go on stage, and I had this sort of case that had this big mirror in it. She’s standing there, and we’re talking, and I said, ‘Look, let’s get married,’” he said in the above clip.

“And she says, ‘You’re asking me to marry you at a country music festival in a trailer house.’ And I said, ‘Well, it’s pretty apropos if you think about it.’ She goes, ‘Are you serious?’ And I said, ‘Well yeah, I’m serious.’” After playing for fans, McGraw returned to his “dressing room and Faith wasn’t there, but I looked at the mirror. In lipstick it said, ‘Yes! I’m gonna be your wife,’” McGraw recalled. “And we still have that mirror. And it was the best day of my life, that’s for sure.”

Much like McGraw, President Biden asked his wife, First Lady Dr. Jill Biden, five times to marry him before she finally said, “ok,” as he recalled in the DNC video that introduced Dr. Biden. It’s pretty safe to say that the time these two couples have spent together building their decades-long marriages was totally worth the wait.

Before you go, click here to see celebrity couples who were married to other people when they met.