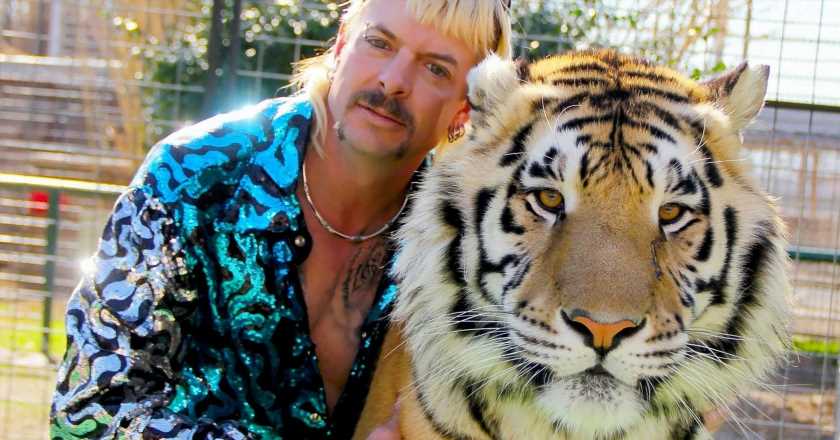 While March 2020 might forever be remembered as the month that we paced our homes during lockdown, we found an equally memorable subject on our TV screens: Tiger King. Last year, the true-crime Netflix documentary series following the life of flamboyant Oklahoma zoo owner Joe Exotic and his bitter feud with animals rights activist Carole Baskin became a pop cultural phenomenon, with 64 million households tuning in to feast on the promise of “murder, mayhem and madness”.

If, like me, you were captivated by the story of Joe Exotic, aka the Tiger King, then chances are you will have hoovered up the reunion episode, cackled through every cover of I Saw Tiger on social media, and eagerly watched Louis Theroux’s very own Joe Exotic documentary, and still been hungry for more tales from the big cat world. Personally, I bookmarked the YouTube video of drag legends The Vivienne and Baga Chipz reacting to scenes from the show, and still lean on it for a laugh to this day.

Tiger King 2: Joe Exotic is behind bars serving a a 22-year sentence for a murder-for-hire plot and charges of animal abuse

But finally, the much-anticipated sequel, Tiger King 2, is here to provide more distraction. To refresh your memory, the last season of Tiger King ended with Exotic being served a 22-year sentence for a murder-for-hire plot against Baskin and 17 charges of animal abuse. If you’re thinking: surely there can’t be much more to the story? Think again. The directors have done some digging – no pun intended – and managed to come up with even more eye-popping details on all the outlandish characters orbiting Joe Exotic.

Naturally, with the star of the show behind bars, the second instalment of Tiger King has had to get creative with the formula. This time around, the programme takes a closer look at the backstories of “old enemies and frenemies”, including Jeff Lowe, Tim Stark, Allen Glover, and self-styled “businessman” James Garretson, as well as exploring how the show changed their lives forever. But that’s not before Joe Exotic makes it known that everyone from the show is shamelessly cashing in on his name while he’s been “staring at the same four walls” in prison.

He’s not wrong. Scruples – in short supply though they undoubtedly were before – have completely flown out the window in the wake of the Tiger King phenomenon. John Reinke, the former manager at Exotic’s zoo, is doing commercials for people involved in serious accidents and selling signed selfies (yes, really). Jeff Lowe has taken over Greater Wynnewood Exotic Animal Park and is allowing visitors during the Covid-19 pandemic to play with tiger cubs, while watching his wife pole dance on the side. Carole Baskin, meanwhile, is dancing the paso doble to Eye Of The Tiger on Dancing With The Stars. What is going on!

But not everyone is out to exploit Exotic. We meet Eric Love, the leader of Team Tiger, a campaign group hoping to secure Exotic a presidential pardon from Donald Trump. He’s convinced Exotic was set up, and will tell any camera crew within shouting distance about suppressed evidence, tainted juries and collusion of law enforcement and prosecutors. This is Tiger King we’re talking about though, so legal paperwork has to be jazzed up a bit. Love goes to meticulous lengths to cover a Cadillac in Joe Exotic artwork, and flies to Washington D.C in a plane emblazoned with ‘Exotic 1’ to file a petition at the White House in person.

In true Tiger King style, the programme never lets you digest the eccentricities of a character before unleashing yet another. Enter ‘Ripper Jack’, a self-described armchair detective who has taken it upon himself with extreme devotion to investigate the disappearance of Don Lewis, Carole Baskin’s missing husband, who mysteriously vanished in 1997 and was declared legally dead in 2002 (Baskin has repeatedly denied any involvement). Investigative reporter Jerry Mitchell is also on the case, as is attorney John Phillips, who starts out representing Lewis’ daughters, and ends up supporting Exotic after the family decide his PR stunts are too much. “There’s a lot of people around who want 15 minutes of fame,” he declares without a shred of irony after announcing he’s traded sides.

The series also delves deep into the case of Don Lewis, interviewing a rotating cast of talking heads in the hope of getting closer to the truth: was Baskin in any way involved with her husband’s disappearance? Or was Lewis leading a dangerous double life that may have led to his downfall in Costa Rica? We hear from people close to Lewis who have differing opinions: his loyal former assistant Anne McQueen clearly believes that Baskin is connected to the case, while a range of Lewis’ associates in Costa Rica suggest that Lewis was mixed up in a whole host of dodgy dealings, including money, guns, and women, which he apparently liked “young and beautiful”.

Beyond the antics of the show’s larger-than-life celebrities, though, the documentary shines in quieter moments when interviewees unravel of their own accord in conversation. Like when Don Lewis’ daughter Donna Pettis casually explains that the family have cut ties with their attorney, John Phillips, and hired a Christian psychic investigator by the name of Troy Griffin instead – a man who likes to visit last-known locations of victims to let his intuition “guide him”. Or, when Lewis’ former right-hand man Kenny Farr can’t remember if it was Baskin or Lewis that entrusted him with a van-load of guns the night of Lewis’ disappearance. Wouldn’t you remember a thing like that?

After taking a detour through the temper tantrums of Exotic’s former business associate Tim Stark and the goings-on of Jeff and Lauren Lowe, who dream of building a new zoo with a strip club, the show circles back to Exotic and the possibility of getting a new trial to clear his name. “In this industry, everybody changes sides whenever they want to change sides”, notes Garretson, just in time for a jaw-dropping plot twist. Only time will tell if Tiger King 2 will become a streaming obsession like its predecessor. But for now, one thing is certain: this saga is far from over.