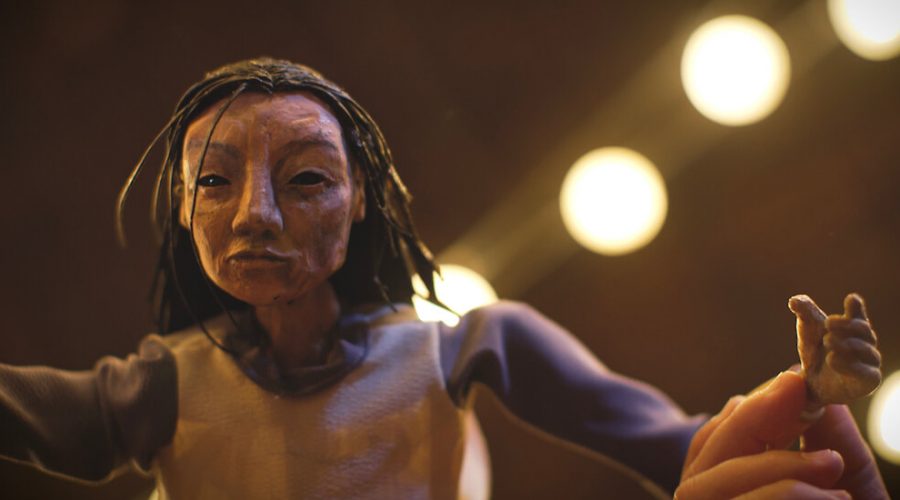 Puppets can’t cry. But they can make people cry.

Or at least exceptionally well-made and well-voiced ones, like those in “Vancouver” by Ralph B. Peña, can. They create a new path for emotion by blocking access to paths that have become too familiar.

“Vancouver” is among the many productions that, at this late date in the era of remote playgoing, are still exploring the ways artists can engage audiences theatrically even when what they’re offering is basically film. The gorgeously carved humanoids (and canines) in “Vancouver” — like the uncanny green screens in the workplace drama “Data” and the deliberately funky video in “The Sprezzaturameron” — are just some of the de-cinematizing strategies I’ve recently experienced online. As audiences creep out of their shells, these three got me thinking about the future of the digital form — and also the live one.

But first they got me thinking about their particular lives and concerns. In “Vancouver,” a production of Ma-Yi Theater and the Chicago International Puppet Theater Festival, the subject seems to be the unhappiness of displacement. For a Japanese man named Hiro, his white wife, Amy, and their 19-year-old daughter, Ashley, that unhappiness is a knot: No one place — certainly not Vancouver, Wash., where they live — can feel like home to them all. The only reasonably content creature in the ménage is Lucky, their scraggly poodle.

That Lucky talks — lovingly, directly and frequently about bacon — is a bit of absurdity you easily accept within the conventions of puppet drama. (Like all the puppets, he’s gorgeously made; the puppetry director is Tom Lee.)

The other characters are more circumspect with their needs. Hiro (voiced by James Yaegashi) often speaks in anguished interior monologue. Amy (Cindy Cheung) drinks herself to sleep most nights in a pile of partly eaten sunflower seeds. Both are exhausted from managing the needs of their daughter, Ashley (Shannon Tyo), a 19-year-old whose Asperger’s diagnosis makes her feel like an alien in her own world. Washing her hair and keeping a job are challenges for her; only video games, amusingly rendered in the most analog way imaginable, are not.

If “Vancouver” is fundamentally about “a mixed-race Asian American family dealing with racial aggressions” — as Peña, who also directed, has said — we see that only glancingly during its 35 minutes. Early on, Ashley tosses off the news that the “weird kid” across the street has called her family “radioactive from the bombs” once dropped on Japan. Later, as if linking varieties of hatred, the play finds Ashley at a bus stop, where someone throws a Chinese takeout food carton at her, shouting, “weirdo.”

Otherwise, the subject of race is buried beneath the family’s many other problems, where, like some underground buildup of energy, it accumulates an almost tectonic power. That’s a paradox common to all art forms — great suppression creates great force — but here, the feeling is intensified by the paradox of the puppets. Their souls seem more accessible than human souls do because their eyes are made of glass. 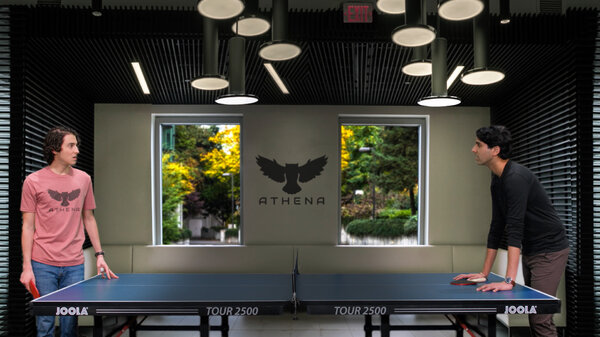 In those eyes, you can see how the themes of “Vancouver” are linked by the problem of conditional love: how it destabilizes children, depresses adults and, writ large, victimizes whole segments of society. Even Lucky (Daniel K. Isaac) suffers when it turns out that he too is provisional.

That moment when people realize how precariously they claim space in the world is a turning point in “Data,” produced by the Alliance Theater and this year’s winner of the Alliance/Kendeda competition for playwrights in graduate school. In this case, the playwright, Matthew Libby, had the requisite background not only in drama but also in high-tech, which is both the subject of the play and the way it got rescued when the pandemic foreclosed on a live, staged production.

The tech also provides a neat visual counterpoint to the story of Maneesh (Cheech Manohar), a programmer at a data-mining company called Athena. When he is asked to transfer to a unit developing a secret algorithm for predicting terrorist acts against the United States government, Maneesh is forced to weigh the benefits to himself against the potential harm to others. The others are immigrants — including Maneesh’s own parents.

If that’s too neat of a setup, it’s hardly science fiction; real-world cases involving data-mining behemoths like Palantir and Cambridge Analytica have raised similar concerns. In any case, the payoff is exciting, in an Aaron Sorkin meets Michael Lewis way. As directed by Susan V. Booth, the Alliance’s artistic director, the production leaps headlong past its problems. Certainly its 90 minutes of ticktock action, forwarded in snappy dialogue between Maneesh and two colleagues — one principled (Clare Latham) and one not (Jake Berne) — has the feel of a well-paced television procedural.

Better than television, though, is the disorienting effect of the green screen technology, which allows the actors, who were actually 10 to 20 feet apart while filming, to appear together, even in endless games of table tennis. As you wonder how the effect was achieved you are brought up short by the contrast with the content: What does it mean when ethics becomes a kind of trick and a game?

“The Sprezzaturameron” goes further: In its world, ethics are a subject of satire. This multimedia “video docudrama” from Tei Blow and Sean McElroy, who write and perform as Royal Osiris Karaoke Ensemble, is so high concept that its content seemed to vaporize as I stared at its bizarre images and tried to decipher its opaque dialogue. From what I could make out, it’s about documentarians in a perfected future world who look back on our highly imperfect one to see how artists in these backward years behaved.

Apparently, they behaved badly; most of the 30-minute show’s action consists of attempts by Blow and McElroy — dressed in bad wigs, gold short-shorts and flowing white tunics — to craft apologies for unspecified crimes against wokeness. But as much as I am generally allergic to deliberately obscure avant-gardism, the kind that sniffs at anyone who can’t unpack the meaning of a portmanteau title composed of “sprezzatura” and “Decameron,” I found something usefully troubling, and specifically theatrical, about this commission from the Baryshnikov Arts Center.

What makes it theatrical is the deliberate roughing up of the video interface; you can’t mistake it (as you likewise can’t mistake “Vancouver” or “Data”) for film. What makes it troubling is its equal opportunity carping at both cancel culture and the false apologetics that try to outwit it. It’s useful to have that conversation, or whatever “The Sprezzaturameron” is, in the air.

At any rate, its image of the art world as a taffy-stretched Parthenon teetering on the back of a giant gilded turtle is surely one I’ll think of the next time a genius is felled by revelations of shocking misdeeds everyone knew about anyway.

It is not an unreasonable question to ask whether the live arts, under the weight of the pandemic but also their own long-festering inequities, are expanding or, like that turtle, exploding — and which would be a better thing. Right now, my more pressing concern is whether experiments like these, enforced by the shutdown, will continue after the reopening.

I hope so: By exploring the wilds of what theater can be without theaters, virtual works clear a path toward continued innovation and growth of the form. No need to apologize for that.