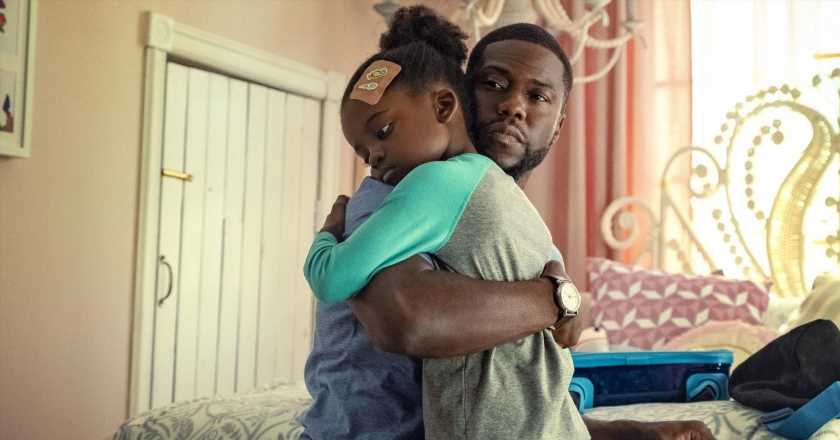 When you hear the name “Kevin Hart”, your mind immediately jumps to his stand-up comedy and plethora of loud – not to mention super-silly – movies (think Jumanji, Think Like A Man, and Night School, to name but three).

Hart’s upcoming Netflix film, however, promises to be very different. Because Fatherhood, which is based on the touching true story of Matthew Logelin, looks set to be an incredibly emotional ride from start to finish.

Sad films on Netflix: 22 tearjerkers, for those in need of a good cry

Here’s what you need to know about the upcoming sobfest.

What’s the plot of Fatherhood?

For those who haven’t read Logelin’s bestselling book, Two Kisses for Maddy: A Memoir of Loss & Love documents his grief and sudden single parenthood following the unexpected death of his wife, Liz, 27 hours after the birth of the couple’s first child.

Netflix’s Fatherhood is an adaptation of Two Kisses for Maddy: A Memoir of Loss & Love.

Fatherhood, which is based upon the memoir, follows this same journey; Hart, stepping into the shoes of a grieving Matt, fights to bring up his baby girl as a single dad. He battles judgemental mother-and-baby groups, unsolicited advice from concerned family members, and a barrage of questions from his curious daughter. He teaches himself to style her hair, and make her laugh, and soothe away her tears.

And, every single night, he gives his little girl two kisses; one for him, and one for his beloved late wife.

Is there a trailer for Fatherhood?

Netflix has dropped a full-length trailer for Fatherhood, and it’s incredibly charming.

What are people saying about Fatherhood?

The trailer has had an overwhelmingly positive response, with many praising the film for offering up a positive representation of single dads.

“First trailer I’ve ever watched that made me tear up. I’m so watching this,” reads one comment underneath the trailer on YouTube.

“Society doesn’t give single dads enough credit. So to all you single dads out there, thank you for being superdads.”

Farewell poetry and readings to remember loved ones by

Another notes: “As a single father who just dropped my daughter off to school, it gets tough, but it’s always rewarding. I’ll have to watch this.”

One more reads: “Being raised by my Dad when it was just him, this hits hard and makes me think of him. I’m glad to see that there are more films being made about single Dads doing EVERYTHING in their power to make sure their children are safe, protected and loved.”

The comment that summed up the trailer’s mood best though?

Who stars in Fatherhood?

Hart, as mentioned, leads the film as Matt – and Melody Hurd stars opposite him as little Maddy.

Fatherhood promises to show us a very different side to comedian Kevin Hart.

When will Fatherhood be available to stream on Netflix?

Fatherhood will drop on Netflix just in time for Father’s Day, as it’ll begin streaming on 18 June.

Will you be watching?