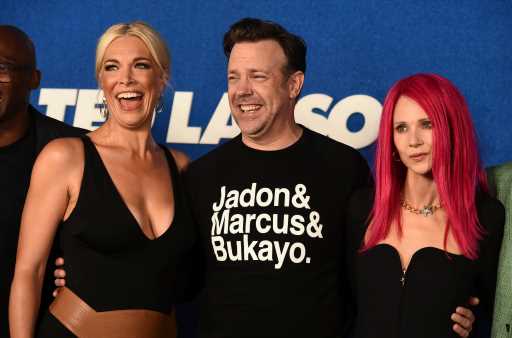 This interview answer has us reaching for our calendars. Apple TV’s Ted Lasso starring and executive produced by Jason Sudeikis hosted a premiere party for season 2 (out July 23!), and cast members got to talking about the coincidence that Sudeikis’ current girlfriend Keeley Hazell shares a name with Lasso character Keeley Jones. According to the actress who plays Keeley, Juno Temple, it’s no coincidence at all — her character was actually inspired by the model-actress dating Olivia Wilde’s ex. And speaking of Olivia Wilde: given that the first season of Ted Lasso came out in August 2020 and Wilde and Sudeikis didn’t announce their separation until November, we’re finding it pretty interesting that a season 1 character was already using real-life Hazell, who plays a minor role in the series, as such a major inspiration. 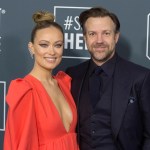 Temple revealed to Entertainment Tonight that Sudeikis’ girlfriend had been the muse for aspects of Keeley Jones: “She is a [friend] of Jason’s that inspired some of Keeley’s character..She was an inspiration for the part.”

Hazell and Sudeikis first met in 2014 while shooting Horrible Bosses 2, six years before he and Wilde would part ways as he found himself starring in a new series where Hazell would also enjoy a small role. They were first confirmed as dating earlier this year when photos emerged of them together in February 2021, at which point Wilde had already moved on with Harry Styles.

This could all, of course, be absolutely nothing and Sudeikis has simply always found Hazell to be a highly inspiring person about whom he might like to write a TV show character. Or perhaps the Ted Lasso writers room is full of Hazell’s exes and we don’t know it. Either way, we’ll certainly be looking at Temple’s character differently in season 2 now that we know how it came about.

Before you go, click here to see celebrity couples with significant age differences.