BEIJING — To stroll through the Hall for Ancestral Worship deep within the Forbidden City is to appreciate the fascination that ornate mechanical timepieces held for successive emperors of China.

Many were brought to the Ming and Qing courts as precious gifts by European ambassadors from the 17th century to the 19th. Others were later manufactured in local workshops in Beijing, Suzhou and especially, Guangzhou, in southern China.

All are marked by a stunning level of intricacy, their chimes sounding while mechanized ducks paddle, mounted figures ride their steeds and waterfalls splash down, in carefully wrought landscapes.

The hall in the Forbidden City, now a museum, has 1,600 of them, but few ever appeared on the auction market until recently.

“They are blindingly rare in real life,” said Simon Bull, a clock specialist in Taunton, England.

In recent years, though, experts say a growing number of reproduction clocks have hit the market, posing as the real thing. The counterfeits were drawn, they say, by the prices paid for real clocks, such as the $3.8 million fetched by a Qing dynasty table clock sold at auction by the socialite Patricia Kluge in 2010.

“The moment you start seeing them two, three, four, five times a year, and the same model — that was the big warning,” said Mr. Bull, who was featured as an expert on BBC’s “Antiques Roadshow” on television. 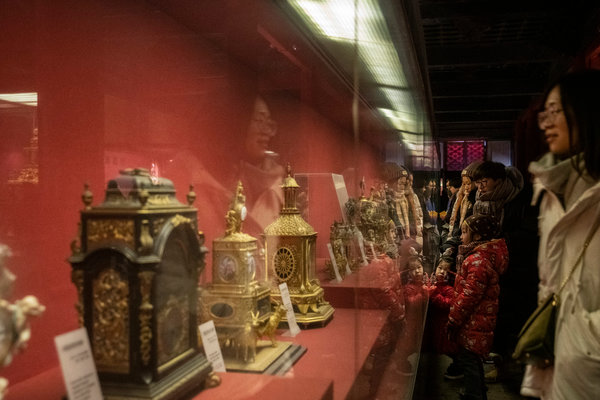 In one case being litigated in New York, a dealer in timepieces based there is suing a California auction house, asserting that the pair of clocks he paid $607,000 for in 2016 had been misrepresented as being at least 100 years old, when they were actually modern reproductions.

“Rather than being more than a century old, the clocks were approximately five years old, and they were manufactured in Beijing by a company that sells virtually identical clocks as modern reproductions for about $20,000 a piece,” the buyer’s lawyer, Ted Poretz, wrote in the lawsuit filed in federal court.

The complicated case highlights the difficulty of adjudicating what is real and what is fake in this market for such elaborate — and ostensibly centuries-old — timepieces.

In the court papers and an interview, Mr. Poretz said he had been able to identify the maker of the clocks as Li Qiusheng, the owner of the Tianjin Edwin Clock Company in Tianjin, a port city southeast of Beijing. He said the clocks appear to have been brought to market in the United States by Mr. Li’s son, Edwin, a California dealer who sells clocks under the name EM Time Company.

Li Qiusheng, reached by telephone, disputed the suggestion that he produced fakes. He said the clocks were genuine, dating to the 1920s, though he acknowledged that old clocks often need repairs that require using modern parts.

A lawyer for his son, Edwin, Steve Sherman, noted that neither Li had been named by the buyer as a defendant in the suit. He said the son had no financial interest in the clocks and had only acted as an intermediary for his father. He “was basically acting as an interpreter,” Mr. Sherman said.

Mr. Li said that he had once operated a workshop, but later only collected and sold the ancient clocks from a space on the fifth floor of an office building in Tianjin. He is well known in a district not far away that is filled with antique shops, including several selling old clocks and new replicas.

Shopkeepers there offered differing accounts as to whether Mr. Li had manufactured reproductions, simply collected them or was in the business of repairing period clocks, as he said.

A clock and watch expert from Canada who visited Mr. Li’s Tianjin company in 2014 said he had the impression that it manufactured reproductions, though he did not see any automaton models of the sort described in the lawsuit. “It was a light industrial workshop,” said Ron Good, the collector, who has a special interest in Chinese horology.

Clars Auction Gallery of Oakland, Calif., which sold the clocks, described the federal lawsuit against it as baseless and said it had relied on the consignor’s assurances of authenticity. In addition, it said the purchaser, Ye Olde Time Keepers Inc. of New York City, was a “sophisticated, trade” purchaser who had used its own expert to validate the authenticity of the clocks before paying.

“The buyer thus relied not on statements by Clars,” the company said, “but rather on its own diligence — conducted with the assistance of its elite, international industry connections, and resulting in a ‘green light,’ as communicated by the buyer to Clars prior to its making payment for the clocks.” After that statement, Clars made a new filing on Thursday asking to introduce the Lis into the case and saying they had concealed the clocks’ “apparent status as modern reproductions, rather than antiques.”

Clars had described the clocks in its auction catalog as “a rare pair of Chinese ormolu bronze automaton clocks” manufactured in a workshop in the southern port city of Guangzhou. The old clocks were “believed to be a gift to the head of household and his spouse meant to impart good wishes for fortune, luck and longevity,” the catalog stated. Clars dated them to roughly the late 19th or early 20th centuries, according to the court papers.

The musical clocks are each about two and a half feet tall, are wound with a key and have delicate bronze-colored metal leaves that lift to reveal revolving figures depicting the Eight Immortals, mythological figures revered in Taoism and secular Chinese culture and often depicted in paintings and sculptures. Twisting glass tubes simulate falling water.

Mr. Li said that one alteration to the clocks involved the figurines, which were originally made of ivory. Since the United States banned the import of ivory, he replaced those with plastic replicas. He said he had received about $480,000 for the two but was not aware of how the auction house represented them.

Mr. Poretz denied that his client had had a specialist study the clocks before paying, but said he did have an expert look at them later. The expert found that the clocks did not show the sort of wear usually seen in items that old. Instead, the clocks had been constructed with modern brass, and with screws and other materials not available until later in the 20th century, at the earliest, his report said.

“It is clear that they are effectively brand-new,” Richard Higgins, the Shrewsbury, England, expert hired by the purchaser, wrote.

The court papers say that, after the purchaser had questioned whether the clocks were actually reproductions, Clars provided a certificate of authenticity from the China Horologe Association. But, the papers say, the document was for a different, single clock and that the association, a trade organization, “is not in the business of providing authentications for antique Chinese clocks.”

A woman at the association in Beijing confirmed that it did not provide certificates of authenticity. Experts from the association were not available this week to comment.

China has a long and esteemed role in the evolution of timekeeping. These mechanical clocks were introduced in about 1601, when a Jesuit missionary, Matteo Ricci, gave two timepieces to the Emperor Wanli.

Known as “zimingzhong,” or self-sounding bells, they were used by European missionaries and foreign ambassadors as a cultural link between China and the West. High-ranking members of the imperial court or wealthy merchants commissioned clocks with ever more complicated movements, and the European timepieces became an important part of court life. The models were imported from Europe or based on European designs, though the Chinese workshops later added motifs of their own.

Mr. Bull, who is not involved in the legal case, said intricate, musical automaton clocks fell abruptly out of fashion in China after the early decades of the 19th century and few, if any, were being produced as the 20th century dawned.

Another expert, Matthew Hopkinson, who is based in London, said that before the recent surge, he typically saw one clock of this type appear on the market in a year. Now, he said, he often sees as many as three.

“Suddenly these clocks were fetching 10 times the amount they were previously,” Mr. Hopkinson said. “When prices go up, the counterfeiters move in and start making reproduction ones.”

He urged vigilance to protect the market for legitimate antique timepieces. “There are still good clocks coming onto the market,” he said. “You have to be careful vetting them.”

12/22/2018 Entertainment Comments Off on They Look Like the Emperors’ Clocks. But Are They Real?
Recent Posts