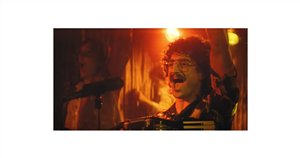 The “Weird: The Al Yankovic Story” Cast Look So Much Like the Real People

“Weird Al” Yankovic has cemented himself into pop culture since his comedic debut in the late ’70s. The multitalented comedian is known for his creative parodies of popular songs such as Madonna’s “Like a Virgin” and Coolio’s “Gangsta Paradise.” Throughout his career, Yankovic has earned numerous awards and accolades, including five Grammy Awards for best comedy album and best concept music video. Outside of the formal awards, several of the comedian’s albums are certified platinum and gold.

While parodies and comedy albums aren’t as popular as they once were, the legacy of “Weird Al” is still strong in the entertainment world. The Roku Channel, from the entertainment giant Roku, is behind a biopic about the comedian, which includes Daniel Radcliffe, Evan Rachel Wood, and Rainn Wilson among the cast. “Weird: The Al Yankovic Story” is set to release by the fall, but in the meantime, let’s look at the cast of the film alongside their real-life counterparts.

Watch Radcliffe as Yankovic in the teaser for “Weird: The Al Yankovic Story” below.

05/11/2022 Entertainment Comments Off on The "Weird: The Al Yankovic Story" Cast Look So Much Like the Real People
Recent Posts