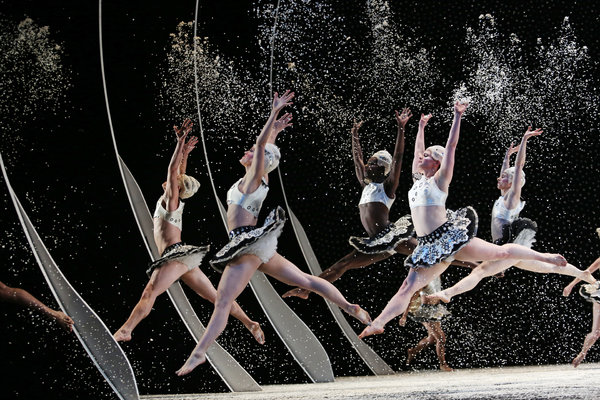 Dances turn into classics for a reason. And in Mark Morris’s “The Hard Nut,” returning to the Brooklyn Academy of Music, there are plenty of them, from the pop-art designs inspired by the cartoonist Charles Burns to the yule log burning on a television set during the party scene. Morris bases his version of holiday classic on E.T.A. Hoffmann’s “The Nutcracker and the Mouse King.” It’s both a riot and a poignant tale of a young girl’s awakening.

For the treasured Mark Morris Dance Group, it also reunites past generations. John Heginbotham, as Mrs. Stahlbaum/Queen, and June Omura, as Fritz, reprise longtime roles, while the veteran company member Laurent Grant returns to the part of Marie. (It’s her 22nd year.) And “The Hard Nut” wouldn’t be the same without the presence of Morris himself. As Dr. Stahlbaum and the King, he’s nothing short of divine. GIA KOURLAS

On Saturday, Dec. 15, Bruce Springsteen will pick up his acoustic guitar at the Walter Kerr Theater for the last of his 236 performances of “Springsteen on Broadway.” But for those of us who couldn’t wrangle a ticket to the Boss’s one-man confessional — or who’ve been dying to unleash their hands in rhythm to “Dancing in the Dark” ever since he shut down clappers cold in early performances — there is hope.

Just hours later, on Dec. 16, Netflix will unveil “Springsteen on Broadway” for streaming to your heart’s content. Distilled from Springsteen’s 2016 memoir, “Born to Run,” the show intersperses storytelling — about his childhood in Freehold, N.J.; his search for a voice; his quest for salvation — with 15 songs, stripped down and solemnized, the better to reveal hidden truths. It’s all part of what Springsteen has deemed his magic trick: that a man like himself, unattractive in voice and appearance, should nonetheless build a rollicking five-decade career in service to a higher calling. Or what he calls his “long and noisy prayer.” KATHRYN SHATTUCK

What Virgil Thomson once called the “music appreciation racket” — the plethora of books, radio programs, and lectures devoted to explaining classical music — reached its zenith at midcentury with Leonard Bernstein’s Omnibus television programs and Young People’s Concerts. But the immersive audio experience of podcasting offers the tantalizing promise of renewal.

WQXR’s “Aria Code” devotes episodes to unpacking opera arias in all their excesses. Hosted by the unassuming Rhiannon Giddens — the spectacular bluegrass musician who started her career studying classical voice — the podcast devotes its first episode to “La Traviata,” weaving together engaging interviews with the soprano Diana Damrau, the dramaturge Cori Ellison and the scientist Brooke Magnanti, who had worked as a call girl in London. It’s no surprise that the episode dropped as the Metropolitan Opera unveiled its new “Traviata” production; “Aria Codes” is produced in partnership with the Met. WILLIAM ROBIN

The musical theater star Norm Lewis began 2018 by spending a couple of months in the Broadway cast of “Once on This Island.” Now he’s wrapping the year in his usual way: with a Christmas cabaret at Feinstein’s/54 Below in Manhattan, that this time he’s calling “Nutcracker Cool.”

Lewis, a Tony nominee for “The Gershwins’ Porgy and Bess,” said one morning this month that he wants his holiday show to be pure fun — a respite from the tumultuous world outside. “I’ve gotten kind of emotional about this past year in a way that you go, ‘I’ve got to turn the news off,’” he said. “So I’m hoping to give some kind of safe space, if you will, some safe haven. No matter what your political affiliation is.”

The playlist will include several numbers from his new release “The Norm Lewis Christmas Album,” including “The Little Drummer Boy,” “Mary, Did You Know?” and “Home,” from “The Wiz.” Burt Bacharach’s “Be Aware” will be new this year, as will a Barbra Streisand song that’s “going to be a surprise,” Lewis said. The six-show run starts Monday, Dec. 17. LAURA COLLINS-HUGHES

It’s no surprise that Pace Gallery’s “Agnes Martin/Navajo Blankets,” where serene abstractions by the 20th-century painter alternate with chief-style textiles from the early 19th century, is the first of its kind. There’s no particular historical connection between the two bodies of work, though Martin did live for many years in New Mexico.

But the pairing is inspired: The blanket’s bright colors bring out an energy that’s usually only implicit in Martin’s subdued horizontal stripes. At the same time, the clean, matte lines of her paintings visually anchor the textiles’ bold patterns, making them easier to take in and appreciate without being overwhelmed. WILL HEINRICH

All it takes is one unforgettable performance — like Darlene Love’s 1963 original “Christmas (Baby Please Come Home)” — to become a fixture of holiday movies, TV and radio, where nostalgia reigns supreme. Of course, Love has contributed far more than that irresistibly over-the-top tune, recorded for the seminal compilation, “A Christmas Gift For You From Phil Spector.”

Love is a member of the Rock & Roll Hall of Fame, recognition for her status as one of the most prolific backup singers of all time; her story was also chronicled in the Oscar-winning documentary “Twenty Feet From Stardom.” But for these two shows at Sony Hall in Manhattan, her singular Christmas songs will be the focus, so the same voice that was the soundtrack for everything from “Love Actually” to “Jingle All The Way” can be the soundtrack to your holiday, too. NATALIE WEINER

For nearly a decade, the Polish director Pawel Pawlikowski struggled with how to tell his parents’ love story — the 40 years they’d spent chasing each other across the Iron Curtain in what he has called “a never-ending disaster.” He finally decided to make a film that’s not actually about them. The protagonists in his latest work are named after his mother and father, Zula and Wiktor, and are given familiar temperaments, but the similarities mostly end there.

In “Cold War,” Zula, an enigmatic young singer from a provincial Polish town, worms her way into auditions for a folk-arts ensemble, and soon into the fantasies of its artistic director, Wiktor. When the group visits Berlin, Wiktor persuades Zula to escape with him — thus beginning a chase across time, borders and musical genres, from Polish songs and Parisian jazz to a Hollywood-esque rock around the clock. Shot in black-and-white, with a soundtrack that aches, it’s a ravishing study in passion and tyranny.