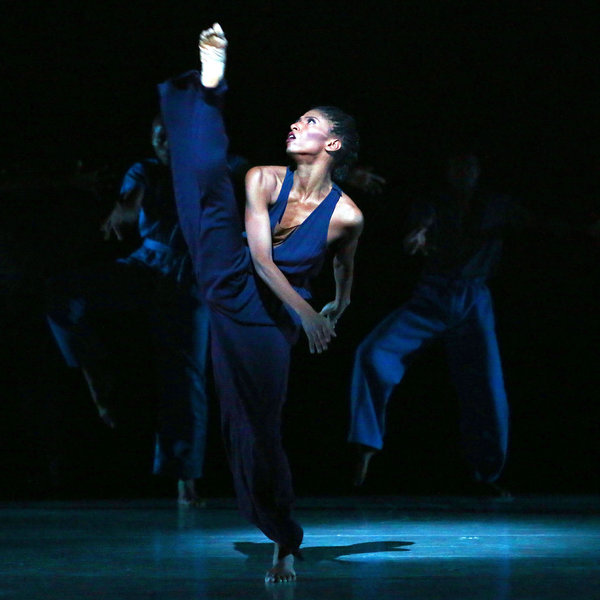 A lively winter tradition grows even brighter this year, as Alvin Ailey American Dance Theater, during its annual New York City Center season, celebrates its 60th anniversary. Starting with the season-opening gala on Nov. 28, nearly every program will begin with “Becoming Ailey,” a multimedia ode to the company’s founder. Nov. 30 brings the premiere of “Lazarus” by the brilliant hip-hop choreographer Rennie Harris. The two-act work explores the persistence of racial inequities in America, from 1958, when Ailey, surmounting those hurdles, established his company, until today.

Cultivating a new generation of audiences, the company presents Young New York Night on Nov. 29, with $29 seats for people ages 21 to 30. The program features Jamar Roberts’s “Members Don’t Get Weary,” set to John Coltrane; and Jessica Lang’s “EN,” a reflection on circularity, along with Ailey’s ever-popular “Revelations.” That classic repeats many times throughout the five-week season, with the added energy of live music on Nov. 28 and 30 and Dec. 1. SIOBHAN BURKE

“We’re gonna do some love songs,” said Syd, the singer of the Internet, during a Los Angeles music festival this month.

Contemporary R&B’s most exciting band challenges expectations with its stripped-down sound and hip presentation, but its lyrics and lush backing vocals could hardly be more classic. The group’s unhurried tempos recall the slow-jam heyday of the ’80s — but with a beach breeze and a drag of California-legal smoke instead of satin sheets and rose petals.

On Friday, Nov. 30, at Hammerstein Ballroom, attendees can expect songs that are understated and deceptively simple; the Los Angeles-bred group’s remarkable technical facility is employed in a mission of making deeply felt, soulful music, not flaunted for its own sake. The overall effect is unabashedly seductive, a welcome result for its swooning audiences.

At the festival, Syd introduced “Wanna Be,” a lilting, gentle proposal off the band’s latest record, “Hive Mind,” with a story: “I played this song for a girl, and now she’s my girl,” she said, flashing a grin. NATALIE WEINER

In 1934, a year after the Chicago Symphony performed Florence Price’s Symphony in E Minor — marking the first time music written by a black woman was played by a major American orchestra — the composer debuted her Piano Concerto in One Movement. Like the powerful symphony that brought Price national attention, the concerto draws together African-American folk music and spirituals with a silvery Romanticism.

Though the concerto was heralded in its premiere with Price at the piano, its symphonic version fell off the radar for decades because of missing orchestral parts. Working with extant manuscript materials, the composer Trevor Weston reconstructed the score, and it was successfully performed and recorded by the New Black Music Repertory Ensemble in 2011.

As Price’s music is increasingly recognized by a previously neglectful classical mainstream, the concerto has begun to see the wider renown it deserves. This week in Newark and New Brunswick, the New Jersey Symphony Orchestra places it alongside other modernist classics including Gershwin’s “Rhapsody in Blue,” led by the imaginatively improvisational pianist Aaron Diehl and conductor Joshua Weilerstein. WILLIAM ROBIN

Theater: ‘The Prisoner,’ a Meditation on Crime and Justice

The story that inspired the play “The Prisoner” percolated for decades in the mind of the director Peter Brook. Traveling in Afghanistan, he saw a man who had been ordered to serve his sentence not within a prison’s walls but sitting just outside them. Mr. Brook, a giant of experimental theater who is now 93, has said that he never knew the details of the case.

“The Prisoner,” which he wrote and directed with his longtime collaborator Marie-Hélène Estienne, fills in those bare outlines with the story of a man named Mavuso (Hiran Abeysekera), who killed his father for having sex with his own daughter. Though she is Mavuso’s sister, he too is attracted to her, and she to him.

A meditation on crime and justice, with some very ancient-Greek family dynamics, the play starts previews on Saturday, Nov. 24, at Theater for a New Audience’s Polonsky Shakespeare Center in Brooklyn. The matinees on Dec. 1, 9 and 15 are scheduled to be followed by talks with Mr. Brook and Ms. Estienne. LAURA COLLINS-HUGHES

To quote Madonna, “Power is being told you’re not loved and not being destroyed by it.” And Agatha Raisin — M.C. Beaton’s London publicist turned Cotswolds sleuth, played by the delightfully irrepressible Ashley Jensen (“Catastrophe,” “Ugly Betty”) — has just made it her mantra.

In “Agatha Raisin and the Wizard of Evesham,” the first of three Season 2 movies on Acorn TV, Agatha has left her heart in Cyprus and rejoined the mischief makers of Carsely Village, where dead bodies lurk beyond the hedgerows with frightening frequency. Then a bad hair day leads Agatha to a hunky new stylist who has a way with women, especially lonely ones with bulging bank accounts. And soon the cobblestones are awash in blackmail, arson and murder, with Agatha naturally in the thick of it.

The materials list for Peter Halley’s seven-and-a-half-foot-tall 2002 painting “Emulation,” one of ten in “Unseen Paintings: 1997-2002” at Sperone Westwater Gallery in Manhattan, includes “fluorescent acrylic, pearlescent acrylic and Roll-a-Tex,” and the canvas’s layout evokes a psychedelic circuit board.

But the care with which Halley arranges these hyperactive textures and rushing shapes gives the painting a curious effect of tranquillity: The bright colors balance one another into a kind of visual equivalent of white noise, with the staticky orange square just below center smoothly refusing your gaze. (Halley’s concurrent show at the Lever House, just a few stops uptown, continues to the end of December.) WILL HEINRICH

In “Happy as Lazzaro,” Alice Rohrwacher travels back into a not-so-distant Italy where an extended family of farmers — like something out of Bruegel’s “The Harvesters,” save for the Walkman — toils in the tobacco fields of an absentee noblewoman known as the Cigarette Queen.

Lazzaro (Adriano Tardiolo), a saintly teenager, bears the brunt of the work with blissful acceptance, undertaking tasks that no one else wants. Then the queen arrives for a rare visit, bringing along her unhappy son, Tancredi (Luca Chikovani). Everyone exploits someone, she explains to him: she, by failing to inform the workers that sharecropping was outlawed years earlier; the workers, by unloading their unwanted tasks on Lazzaro. Tancredi suggests that Lazzaro exploits no one, before then enlisting his help in plotting Tancredi’s own kidnapping.

At that point, “Happy as Lazzaro” is propelled into the present, a fable of biblical proportion set amid a decaying Italy — and requiring a leap of faith. Rohrwacher won for best screenplay at the Cannes Film Festival this year but lost out to Matteo Garrone’s “Dogman” as Italy’s Oscar submission for best foreign-language film.

“Happy as Lazzaro” opens on Friday, Nov. 30, at the IFC Center in New York, the Landmark Regent in Los Angeles and on Netflix. KATHRYN SHATTUCK

11/23/2018 Entertainment Comments Off on The Week in Arts: Alvin Ailey, the Internet and Florence Price
Recent Posts